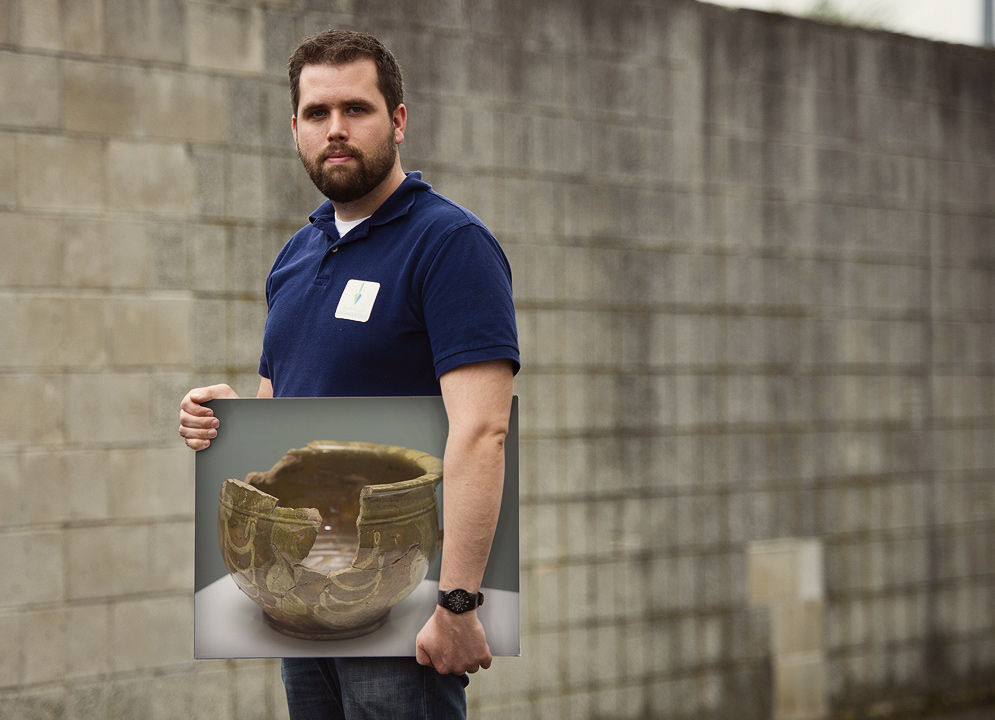 Destroyed in the Battle of Bunker Hill, but still talking to archaeologists

Boston city archaeologist Joe Bagley handles the Colonial-era cannonballs in his lab with great care. Bagley knows that while most cannonballs made in 18th-century America were cast out of heavy iron, some—those the British were experimenting with—were filled with gunpowder. And they still are.

“When these cannonballs hit the ground, they would explode like a small bomb,” says Bagley (CAS’06), who earned a master’s in archaeology at UMass Boston after graduating from BU. He is three years into a job that oversees all archaeological work on public sites in Boston. “So if we find one in our collection that is lighter than the others, it means we might have an unexploded bomb and a very big hazard. We were told to evacuate and call the Boston Police bomb squad right away if we ever come across one.”

The cannonballs in Bagley’s workspace come from Charlestown’s Three Cranes Tavern site, which dates to 1629 and was unearthed in the 1980s in an archaeological survey that was required before work could start on Boston’s infamous Big Dig. The many boxes of artifacts from the Three Cranes dig were sent to Boston’s City Archaeology Lab in West Roxbury, where they languished for almost three decades.

Now 31, Bagley wasn’t the city archaeologist at the time, but his job often involves the findings from digs done by his predecessors. For the Three Cranes project, Bagley and his team of volunteers are studying thousands of artifacts stored in more than 200 acid-free boxes, hoping to learn what they can about the day-to-day lives of Colonial Americans. Boston area finds normally range from buttons to privy pots, pottery to pipes, so the Charlestown cannonballs add a rare, and unwelcome, element of risk.

During the pre–Big Dig excavation, the Public Archaeology Laboratory, a private nonprofit firm that worked with the city, hoped that the Charlestown site would yield the home and office of Massachusetts Bay Colony Governor John Winthrop. Jennifer Poulsen (CAS’06), archaeological collections manager at the Massachusetts Historical Commission (and Bagley’s wife), says what they did find were a few wooden pillars from Winthrop’s “Great House,” as it was called, and the first stone foundations of the Three Cranes Tavern, along with its wine cellar, the longhouse (where the tavern owners lived), and privies (the under portion of an outhouse). Archaeologists are especially fond of privies, because besides their more mundane function, they were used to dispose of household garbage—today’s archaeological gold.

The Great House was the first meetinghouse and the first government building in the Massachusetts Bay Colony. Winthrop abandoned it a year after moving in, and the building was later turned into a church. In 1635, it became the Three Cranes Tavern, a high-end establishment, Bagley says, whose patrons were wealthy merchants and officers. Artifacts discovered within the tavern support this opinion. Archaeologists found elaborate redware pottery, wine bottles, a bone butchered from a fine cut of sheep, and perhaps most interesting, the bowl from a clay pipe.

Bagley says this particular status-rich pipe would have had a stem that was two- to three-feet-long. “Very male,” he says. “And you can see faintly the lion and the unicorn from the crest of the British crown.”

He points out that because the pipe was found in a privy dating between 1765 and 1775, just before the Revolutionary War, “smoking a pipe with the British crown on it was basically saying, ‘I support the crown.’ It would have been a big middle finger to every person in that tavern.”

In fact, the beginning of the war spelled the end of the Three Cranes Tavern. After operating for 140 years, it was destroyed by British troops. Riled by snipers in the area, they set Charlestown ablaze in the Battle of Bunker Hill on June 17, 1775.

When archaeologists excavated here in the 1980s, they came across a burnt layer and under that what Bagley calls Boston’s Pompeii. The city later voted to make the area around the tavern City Square Park, stipulating that it was never to be developed.

Today, the unassuming City Archaeology Lab building holds about 2,000 boxes representing some 8,000 years of history, and many are waiting for Bagley to either study them for the first time or revisit them. On any given day, volunteers can be found sitting at long tables in the front of the lab, systematically combing through boxes, making sure all artifacts are properly catalogued, stored, and boxed. Often, says Bagley, the artifacts attract writers and archaeologists—both professional and amateur—from around the country.

“Written history is often incomplete, so archaeology is able to answer questions about history and tell stories about people and places and times that don’t have a record otherwise,” says Bagley.

Currently, a team from the University of Arkansas is using a 3-D scanner to compare fingerprints found on the redware pottery from the Three Cranes site, hoping to match them with fingerprints of potters from known excavated kiln sites. Charlestown was at the time one of the largest manufacturers of redware in New England, well-known for its popular Charlestown Ware, and one such kiln is the Parker-Harris Redware Company, which made pottery-like chamber pots and milk pans from 1714 to 1775. Because Parker-Harris was run by a woman named Grace Parker and the tavern was run by Mary Long, Bagley notes the coincidence as one of the first examples of two female business owners working together in Colonial America.

“For me, archaeology in Boston gives you the story that the history doesn’t record,” says Bagley, who is the caretaker at Dorchester’s William Clapp House, built in 1806 and now Dorchester Historical Society headquarters. “Written history is often incomplete, so archaeology is able to answer questions about history and tell stories about people and places and times that don’t have a record otherwise, and many times that is the poor, women, children, and minorities. Archaeology allows us to look at all those aspects of life in the world that go beyond historic record. That’s what gets me so excited.”

There are 12 comments on Secrets of the Three Cranes Tavern