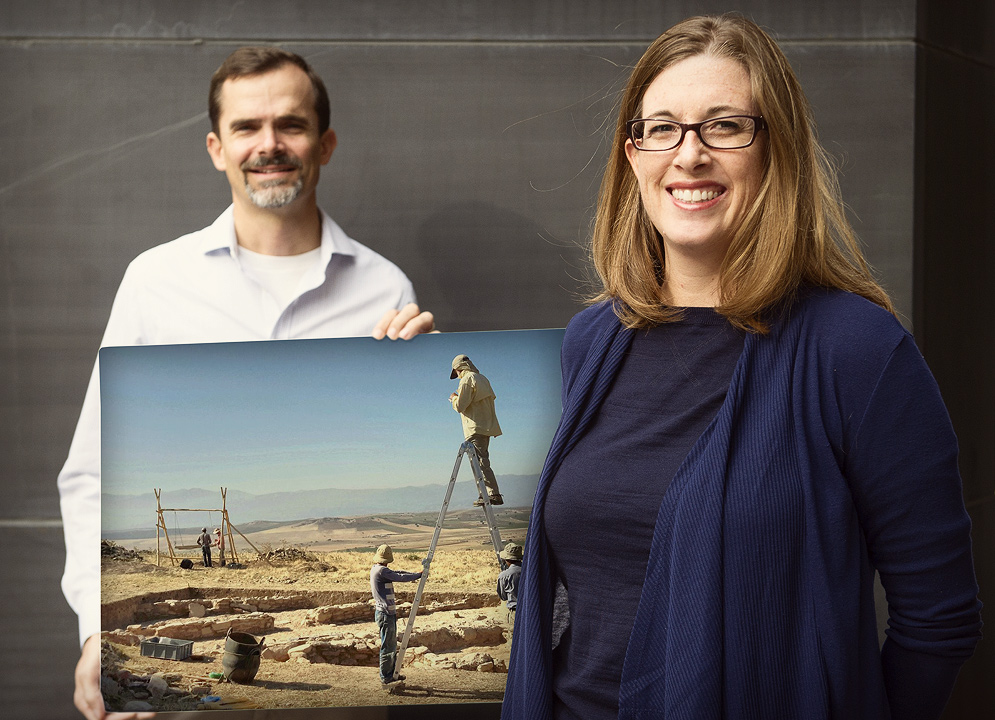 Was a Bronze Age city in Turkey abandoned because of climate change or fire?

In the Late Bronze Age, the walls of the citadel at Kaymakçı rose 10 feet above the jagged bedrock surrounding it. Behind the fortification was a community of homes, workshops, roads, plazas, and great halls. The neighboring residences and cemeteries surrounding the citadel sprawled across 60 acres—larger than the site of Troy, the ancient city celebrated in The Iliad.

And then they were gone.

Chris Roosevelt, a College of Arts & Sciences associate professor of archaeology, and Christina Luke, a senior lecturer in the archaeology department and the CAS Writing Program, are leading a team of archaeologists who are trying to learn what life was like at Kaymakçı, and why the largest known Middle to Late Bronze Age (2000 to 1200 BC) site in western Anatolia (current-day Turkey) was abandoned. The archaeologists are studying items ranging from pottery to seeds to the teeth of animals that lived in the area, and they hope to reconstruct the site with help from computer-enhanced photographs.

Roosevelt and Luke have spent the past 10 summers exploring the second millennium BC site and its greater environs in the Marmara Lake basin. Working on foot and with drones, their team has found six fortified citadels, the largest of which, Kaymakçı, was the focus of this summer’s excavation.

“We believe Kaymakçı was the political powerhouse in the area,” Luke says. “The site was a very big, bustling city, and then it collapsed. No one knows why, but there were periods of large-scale fire. And then no one went back there to live. From an archaeological perspective, that’s fantastic, because otherwise we would have to weed through the layers of everyone who lived on top of the site afterward. We have in Kaymakçı what is called a pristine site.”

While they have yet to find proof of a written language at Kaymakçı, Roosevelt and Luke believe it was the capital city of a vassal kingdom mentioned in ancient Anatolian Hittite texts, whose archives describe a royal marriage with a king from the “Seha River Land,” the kingdom those at Kaymakçı probably ruled over. Luke says other written records suggest that the politically astute kings living at Kaymakçı would shift alliances frequently, not unlike the kings and chieftains in Game of Thrones.

Click and drag to view a rendering of a 10-meter-by-10-meter excavation pit at the dig site. 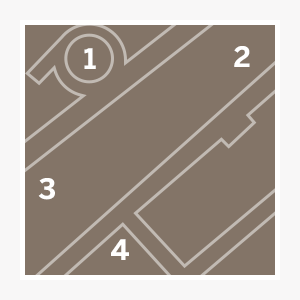 The Kaymakçı Archaeological Project is, in fact, just one part of the duo’s larger Gygaia Projects, a multifaceted initiative to preserve the ancestral cultures and natural environments of western Turkey’s Marmara Lake basin. Their work is partially funded by the National Science Foundation and the National Endowment for the Humanities. Gygaia Projects strives to educate local residents and to explore the geopolitical, economic, ritual, and social intricacies of the site, such as how the residents of Kaymakçı got along with the neighboring Hittite and Mycenaean people.

The BU-based team worked this past summer with more than 60 archaeologists from universities in the United States, the Czech Republic, and Turkey. Some collected oral histories from the locals, while others made plans for an education center that will one day teach visitors about the site. Team members took turns writing about the dig on the Gygaia Projects blog when they weren’t out in the field.

This summer’s work in Kaymakçı yielded 55,000 fragments of pottery, as well as a bronze knife, loom weights, broaches, tools, animal bones, and marble idols. The archaeologists say uncommon objects such as the knife and the tools suggest that the site was home to a prosperous people. All of the artifacts were digitally recorded and scanned into a database, the 21st-century archaeologist’s most important tool. 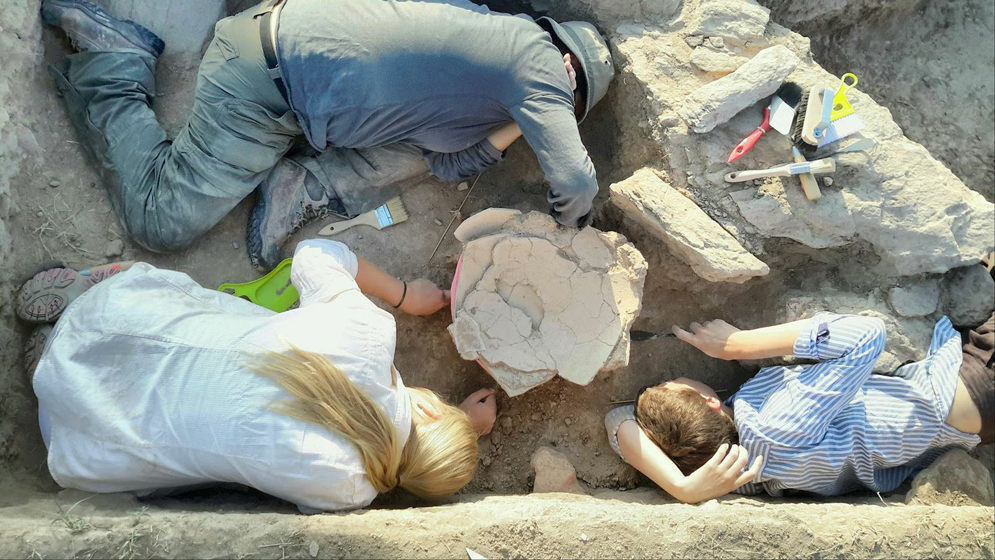 Archaeologists often use the phrase “excavation is destruction,” Roosevelt says, referring to the field’s practice of unearthing sites with trowels and shovels, used today with great care, or to 19th-century German explorer Heinrich Schliemann’s use of dynamite to blast away rock at Troy.

“These days, excavation is digitization,” he says. “We now have the ability to record things in three dimensions, so you are preserving a volumetric model of the site before you excavate it and creating a virtual model as you’re excavating it.”

In Kaymakçı, the team made a 3-D digital model of what Kaymakçı looks like today, using a technique known as photogrammetry. This is a multistep process that involves 3-D mapping of the site, using iPhone-size laminated plastic targets to mark the perimeter. To do that, Brandon Olson (GRS’15) worked alongside Manny Moss, a PhD candidate at the City University of New York, using a real-time GPS system to record the target’s coordinates. They took overlapping digital photographs of the area, making sure to capture those targets in the photos. The coordinate data and photographs were uploaded and digitally processed to create a georeferenced plot plan, and the 3-D model was completed by pulling in mosaic photographs. The resulting model is a specialized library of information, and can display details such as soil layers, the placement of artifacts, and the site’s architectural features, like inner walls and rooms.

Photogrammetry is “taking archaeology by storm,” Olson says. “One of the fundamental goals of an archaeological excavation is to document the spatial provenance of all features unearthed. That information is then used to determine stratigraphic relationships,” which help archaeologists to establish a chronological timeline of the site.

Elsewhere on the project, John “Mac” Marston, a CAS assistant professor of archaeology and anthropology, has analyzed seeds of domestic plants such as wheat, grape pits, and lentils to learn about diet, agriculture, and environmental changes in the region in the past. Marston used strontium isotope analysis to determine how far the community’s animals wandered. “By taking sequential samples along the vertical growth axis of an animal’s tooth,” he says, “we can track the geological ‘fingerprint’ of the area where that animal resided as that part of the tooth developed. And by using several teeth, we can reconstruct up to two years of the animal’s life and determine how mobile that animal was during its lifetime and which geologies it traversed.”

One big mystery the team hopes to solve is how Kaymakçı has been affected by climate change. Regional data on the site’s climate show that the Late Bronze Age was a time of extreme dryness across the Near East. This change in climate, Marston says, may be the reason for the fall of the Mycenaean palaces in Greece and the movement of the “Sea Peoples,” a group of seafaring raiders, probably from the Aegean Sea area, into Egypt and the Levant.

“We want to see if there is evidence for this change at Kaymakçı, and whether that has anything to do with the site being abandoned after the Late Bronze Age,” he says. “We will get information from seeds regarding how local farmers adapted to drier conditions and see whether we see signs of food scarcity.”

With these unanswered questions, the work at Kaymakçı is far from over.