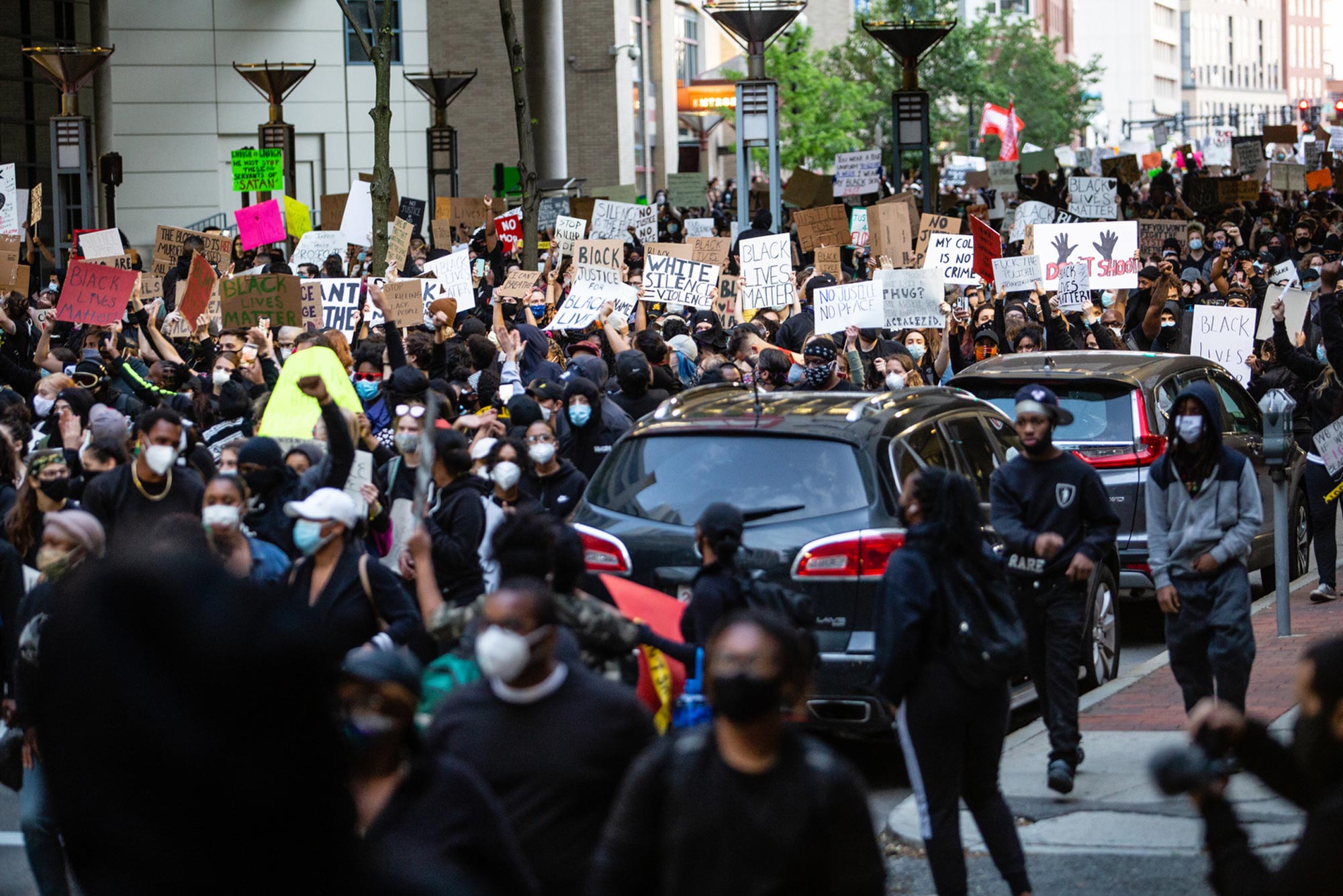 Protesters took to the streets in Boston May 31 to protest the murder of George Floyd by a Minneapolis police officer on May 25.  Photo by Sophie Park (CAS’20)

Students, faculty, and staff come together to share experiences, fears, and suggestions for moving forward

The week after a white Minneapolis police officer killed George Floyd, a black man, and in the midst of ongoing Black Lives Matter protests (some of them in the face of further police brutality) across the country and around the world, the School of Public Health addressed the situation on June 3.

The Conversation on Race and Policing was held before a Zoom and Facebook Live audience of nearly 1,000 people, and the panel of students, faculty, and staff from SPH and the wider BU community shared their experiences, fears, frustrations, and hopes, as well as resources for support and action. Several attendees also took the floor to share and to ask questions.

The conversation was not recorded, so people could feel able to share freely and honestly, and the media were asked not to quote directly. A few of the panelists provided quotes after the event.

“In past years we have been able to gather, in person, in the aftermath of such horrific events,” said Yvette Cozier (SPH’94,’04), School of Public Health assistant dean for diversity and inclusion and an associate professor of epidemiology, who convened and moderated the discussion.

“Sometimes these gatherings have been planned programming, other times simply an opportunity to sit quietly with others, allowing tears and emotions to flow as necessary,” she said. “In this time of social distancing, I felt it was more important than ever to bring the community together during this traumatic time.

“My hope is that this event will serve as a launch point from which hard conversations can occur in every corner of SPH and the Medical Campus.”

Omobolanle (Bola) Adams (SPH’21) suggested ways white people can show solidarity with the black community. “Two things white people can do to better support black friends, students, and colleagues is to actively listen and acknowledge their privilege,” she said.

“Black people have used their voices over time to say that their lives matter too, but 400-plus years of systemic oppression has shown that it has not been listened to,” Adams said. “As a white person, it is listening and understanding that this is not the fight of black people alone, but one where we need the collective voices of white people to demand that which black people have continuously spoken about.

“It is reflecting on the ways you uphold these systems of oppression—be it in your workplace via microaggression, in your hiring, admissions, and even executive decisions where black voices are not represented. It is using your voices to ask why.”

Nick Bates, assistant director of the Howard Thurman Center for Common Ground Thurman Networks, responded to the widespread criticism of rioting and looting at this moment with a quote from Martin Luther King, Jr.’s 1968 “A Sense of New Direction” speech: “The bruising edge of the weapon of violence in Negro hands was employed almost exclusively against property, not persons. The inner rage of Negroes is not yet expressed in anti-humanism.”

While King (GRS’55, Hon.’59) is known for his commitment to nonviolent protest, Bates said, he “also understood that critiquing oppressed black people for their reactions to a system that has violently attacked their humanity over centuries can be misplaced and inequitable.

“The question I believe King is asking is, why are we spending so much time critiquing the supposed violent, singular instances of individuals, instead of the empirical and systemic violence of a system on black people?”

Josiane Fofana (MED’26) stressed the importance of understanding the centuries of structural violence that the protests are against. “We need to start by asking ourselves a fundamental question: Why? Why are people protesting, not how,” she said. “Why did it take so long for people to realize that racism has been undermining our lives when we have been voicing our frustrations and protesting in all ways possible for decades? Figuring out why will answer the question: how can you help?”

Larry Dunham (SDM’83), a Goldman School of Dental Medicine clinical assistant professor of general dentistry and director of diversity and multicultural affairs, expressed hope for this moment, when the nation is wrestling with racial injustice. “More Americans than ever before are aware of the pathological virulence of racism,” he said. “We have the opportunity to collectively channel the fear, trauma, and anger that we are feeling toward eradicating the virus of racism within our country.”

Craig Andrade (SPH’06,’11), SPH associate dean for practice and director of the SPH Activist Lab, said, “I have never been in a Zoom session that was so palpably infused with honest emotion, meaningful thoughts, and potent energy—and we just scratched the surface of an incredibly broad, complex issue that goes well beyond policing, but deep into the heart of public health.”

As a community dedicated to the health of all, Andrade said, it is important both “to gather as a community to share with and care for each other and to begin to prepare for what’s next.”

He stressed the importance of self-care and community-care for a school and campus committed to the health of all. “For many of us, the trauma of racism and the damage it inflicts is old, deep, and exhausting,” he said. “Counteracting feelings of isolation and despair with regular connections with trusted family, friends, and colleagues is a helpful tool we can carry in each of our care-kits.”

At the same time, said Andrade, the conversation must move forward. There will be more gatherings to share and support, and to identify and take action, he said, noting the announcement that one of the nation’s leading scholars of racism, Ibram X. Kendi, will be joining BU as director of the new BU Center for Antiracism Research, which “is certainly a significant and promising development.

“Moreover, I continue to explore how we bring a sustained focus on racism as a core public health challenge, especially through the work of the Activist Lab.”

In the meantime, Andrade said, “I trust that the hundreds who engaged in Wednesday’s conversation and hundreds more BU allies will stand up to create, and be, the change we need.”

At the end of the event, Cozier mentioned the recent unexpected loss of Lance Martin, a longtime School of Medicine Office of Diversity and Inclusion administrative assistant and an accomplished jazz musician. “He would frequently close the annual MLK celebration and somber gatherings like this with his music,” Cozier said. Martin’s ability to conclude a event like the June 3 conversation with his music was dearly missed.

SPH Conversation on Race and Policing Draws Nearly 1,000 from BU Community
0
share this