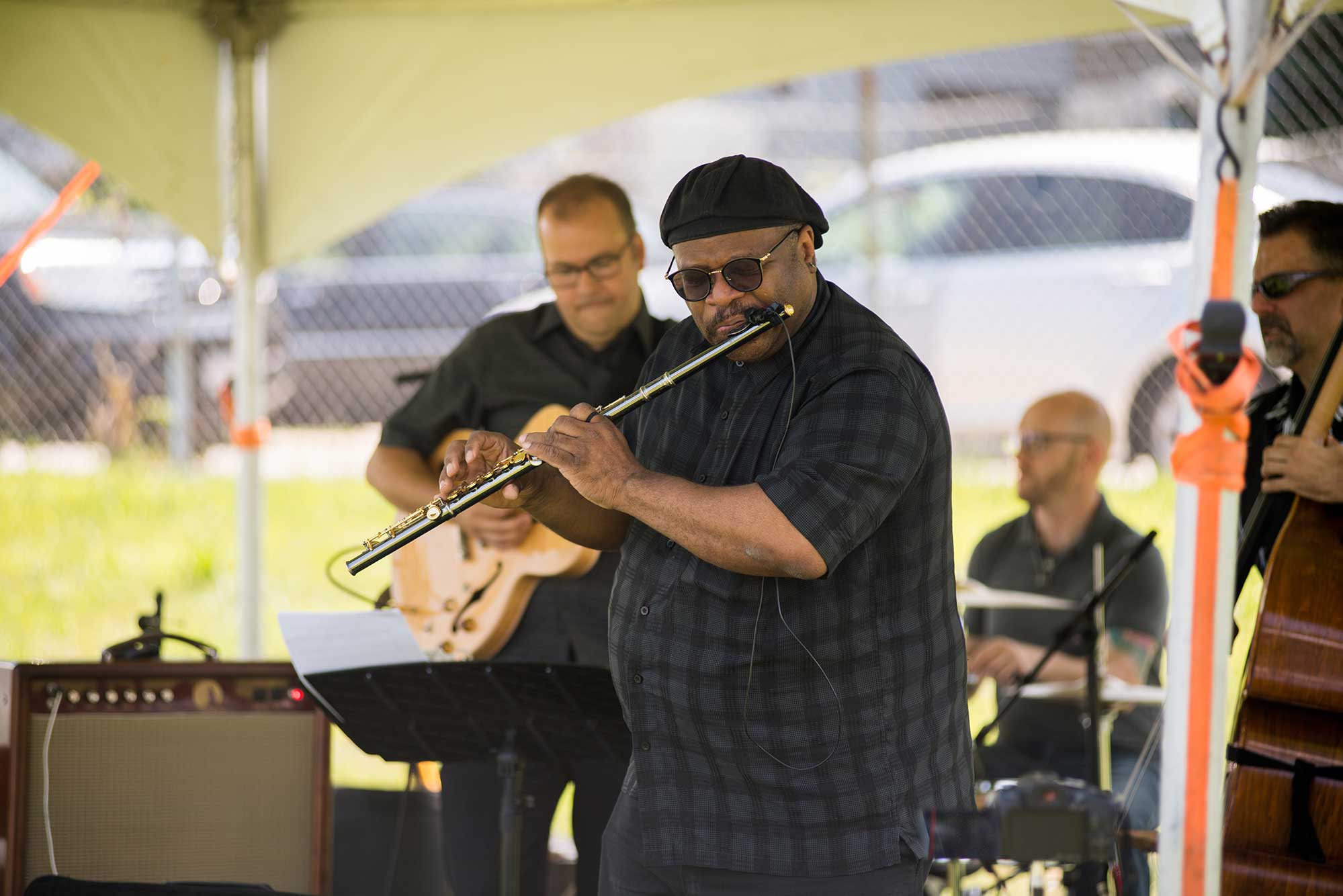 Lance Martin has put down his flute for the last time, too soon.

The popular, self-effacing administrative assistant of the School of Medicine Diversity and Inclusion Office and a stalwart of the Boston jazz scene died unexpectedly last week at age 60.

“From his brain to his lips to his flute, he was wired directly into it,” says occasional bandmate Rafael Ortega, a MED professor of anesthesiology, who had previously been Martin’s supervisor.

“He was one of the sweetest guys I’ve ever met,” says Boston drummer and producer Dan Cantor, a Berklee College of Music associate professor and a longtime friend, who is producing Martin’s new album at his Watertown studio, Notable Productions.

Martin was popular not just with colleagues, but with students as well, often lending  a sympathetic ear and advice about navigating school and life. As a musician who played what he called “physical jazz,” along with many other types of music, he was a favorite of Boston jazz fans, his fellow parishioners at Twelfth Baptist Church in Roxbury, and anyone who heard him play around the Medical Campus.

“He was such an interesting person, and I will certainly miss my conversations with him,” says Karen Antman, dean of MED and provost of the Medical Campus. “He was incredibly talented. I have never heard someone play a jazz flute like he could.”

Martin, who lived alone, was found dead Friday night in his apartment near West Campus by Boston Police performing a well-being check, with assistance from the BU Police Department. His death is under investigation by Boston Police, but is not believed to be suspicious.

Long a mainstay of the city’s jazz clubs, including the now-gone Ryles in Cambridge, where he gigged for nearly 30 years, Martin also taught flute improvisation to undergraduates at Wellesley College. The son of a minister, he grew up in a church-focused family in East Pittsburgh, and he was a fixture at Twelfth Baptist, playing during services and in many other settings and bringing in well-known names to perform, including Branford Marsalis.

Jonathan Singleton, Twelfth Baptist minister of music, had known him since the 1980s, when he arrived in Boston as a student at Berklee College of Music and heard Martin play.

“His love for music enveloped you when you were around him,” says Singleton, who calls Martin one of his best friends. “He had a unique style that made everything he played very soulful. He was trained on classical and loved jazz, but he made every song his own.”

Martin also had a strong sense of morality that infused his way of dealing with people, Singleton says. “Even when he was upset, he wasn’t negative, and he never used any harsh language. He was an awesome person to be around.”

The two also bonded over their love of corny 1960s and ’70s TV show theme songs, Singleton says: “He was the only person I know who knew all the words to the Good & Plenty TV commercial from the ’60s.”

“He had a very broad repertoire,” says Ortega, who is also a guitarist and played with Martin in the Boston University Medical Campus Band. “He had a tremendous memory for all the tunes in the Great American Songbook, he knew every standard you could think of—and he didn’t just know them, he could play them in any key.” His enthusiasm extended to rock and R&B hits audiences might request, right up to Beyoncé.

Cantor and Martin became friends at a jam session in 1984. “We did a couple of choruses, just drums and flute, and had a fantastic time,” Cantor says. “We just saw eye to eye.”

They played together many times thereafter, and Cantor learned that the drums-and-flute breakdown was a Martin signature. “To a great extent, people think flute is this sweet, mellifluous, melodic instrument, and he wanted to single-handedly change that,” he says. “He wanted it to be tough, funky, and rhythmic.”

Cantor says Martin was taking his time with the new album, which includes both originals and covers—among them “Ode to Joy” from Beethoven’s Ninth Symphony, with string players from Twelfth Baptist. “I said, ‘Don’t you want to get some crack session players?’ and he said, ‘I love these ladies,’” he recalls. Also playing on the album are musicians Martin knew as a young man in Pittsburgh. Cantor says Martin has long been like family and he will look to completing the existing tracks.

Friends laud Martin’s generosity with players who weren’t at his level.

“He had the patience to play with people who probably sounded cacophonous to him and to tolerate, and even enjoy, it,” Ortega says.

“He would see the glint in their eye and encourage them to make the most of it,” Cantor says, noting that Martin often encouraged his students to join him on the bandstand during club gigs, a generous gesture not many musicians would make.

Taking care of those who needed help wasn’t just a musical hallmark, says Ortega, who was associate dean for diversity and multicultural affairs, as it was known then, from 2002 to 2018. He  hired Martin in 2012 as essentially an administrative assistant, scheduling meetings, organizing documents, and answering phones. Ortega was looking for someone who could serve as a big brother to students, including those in the Early Medical School Selection Program—“a counselor if you will.”

“To be good at music, you need to listen more than play,” Ortega says. “Students would unload their troubles and their questions, and he would listen and only answer back when needed. His musical training translated into his work.”

Martin’s listening and his advice meant a lot to Raji Pyda (CAS’16, MED’21). “I really got to know him a couple of years ago, when I myself was going through some interesting things personally. Of course we have the support of our administration, et cetera, but I think a lot of the time it’s very difficult for people to talk about things that happen. And he had a very good pulse on how people felt. It’s not just me. He has been a pillar of support for so many students.

“He could have just left it at, ‘Oh, I hope you’re doing OK’ and given me candy from the bowl,” Pyda says. “But he always went the extra mile to make sure you were OK, and supported you in whatever way.”

“He was a very quiet, reserved person on the surface, but he was someone who touched people in profound ways,” says John Polk, MED associate dean for diversity and inclusion and an instructor in surgery, who talked music with Martin almost every day. “You give people a job description, but what people bring to their office is added value, and in Lance’s case it was his character, a character of immense depth,” Polk says.

Maybe humans weren’t the only ones who recognized that. “He was a complete lover of dogs…a dog whisperer,” Cantor says. “My dogs would hear him coming down the street and get excited, like Santa Claus was coming.”

Plans are underway for a memorial for Lance Martin on the Medical Campus.