Embed Feeds from the Course Catalog

Editors can add live information from BU’s course catalog directly to their page using the Course Feed plugin. This plugin must be activated for your site before it can be used. Please contact us if you’re interested in activating the Course Feeds plugin.

[bu-course-feed include=”CASPY”] will list all courses in the College of Arts and Sciences’ Physics department using the three-letter college code plus the two-letter department identifier. 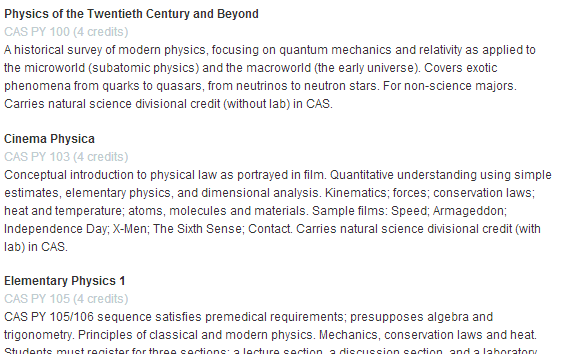 Choosing which courses to display

Include what you want

Specify which courses to display using the include attribute.  This can be done in four ways:

Additionally, you can specify multiple inclusions by separating them with commas.  For example, to list two specific courses one could use [bu-course-feed include="CASPY105,CASPY103"].  Note that when using multiple inclusions, the order in which they appear in the short code is ignored.

Exclude what you don’t want

You can filter out any items you don’t want with the exclude attribute. This follows the same format as include, and any courses in the exclusion list will be omitted from the generated list. For example, [bu-course-feed include="CASPY" exclude="CASPY105] lists all Physics courses except for PY 105.

Courses can be limited by Hub areas by using the hub="" attribute.

[bu-course-feed include="CGS" hub="D"] will display courses with Hub Area D (Scientific Inquiry I) for the College of General Studies. Multiple areas may be listed with hub="D,E,F" or to include courses with any hub areas, hub="any" will also work.

By default, all areas added in the hub="" attribute must be on a course for it to be displayed. For example,  [bu-course-feed include="CGS" hub="D, H"] will display courses that have area Area D (Scientific Inquiry I) AND Area H (Quantitative Reasoning II, for the College of General Studies).

The examples above will only produce summary information like course ID and description. To see more specific details like scheduling and instructor info, you must specify which period you want this info for. Periods are specified with the period attribute and this may be a list of multiple periods separated by commas. A period is a 4-digit year followed by a four-character semester code. Semester codes are one of FALL, SPRG, SUM1, or SUM2 for the fall, spring, and two summer semesters respectively.

The following shortcode will produce a feed of all courses in CASPY except for CASPY105, and for courses which were available in Fall of 2013 it will also show their specific schedule details. 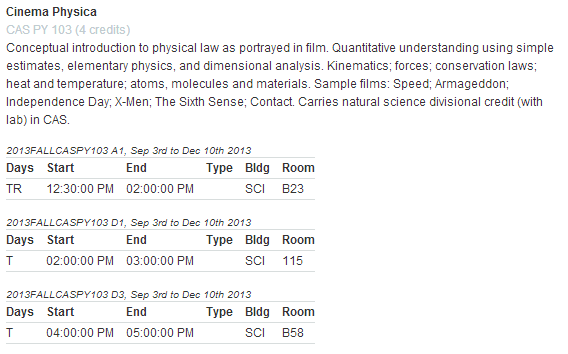 An alternative is to specify use_bulletin="Y" in the shortcode. This will ensure that the feed uses the information that is current in the bulletin regardless of what period is being shown.

There are some additional shortcode attributes that can further refine the output:

The plugin offers a few options for customizing markup.  Your theme will provide a default structure; this is what would be used in all of the examples above.  Some themes may additionally offer named formats that change the output produced by the shortcode.  Consult the documentation provided with your theme to determine if your theme supports named formats for course feeds.  If it does, you can specify a custom format for your feed like:

This would show all courses in CASPY using the “condensed” format.  For this to be effective your theme must specifically define a format called “condensed”.