Capital Account Regulations and the Trading System:
A Compatibility Review 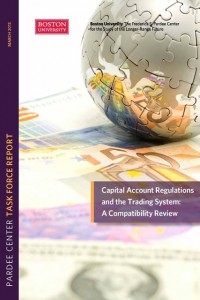 Spanish version produced by the Center for the Study of State and Society, Buenos Aires.

Special note: In order to use the active hyperlinks in the PDF version of this report, open the report using a web browser.

This report is the product of the Pardee Center Task Force on Regulating Capital Flows for Long-Run Development and builds on the Task Force´s first report published in March 2012.

The Pardee Center Task Force was convened initially in September 2011 as consensus was emerging that the global financial crisis has re-confirmed the need to regulate cross-border finance. The March 2012 report argues that international financial institutions – and in particular the International Monetary Fund – need to support measures that would allow capital account regulations (CARs) to become a standard and effective part of the macroeconomic policy toolkit. Yet some policymakers and academics expressed concern that many nations — and especially developing countries — may not have the flexibility to adequately deploy such regulations because of trade and investment treaties they are party to.

In June 2012, the Pardee Center, with the Center for the Study of State and Society (CEDES) in Argentina and Global Development and Environment Institute (GDAE) at Tufts University, convened a second Task Force workshop in Buenos Aires specifically to review agreements at the WTO and various Free Trade Agreements (FTAs) and Bilateral Investment Treaties (BITs) for the extent to which the trading regime is compatible with the ability to deploy effective capital account regulations. This report presents the findings of that review, and highlights a number of potential incompatibilities found between the trade and investment treaties and the ability to deploy CARs. It also highlights an alarming lack of policy space to use CARs under a variety of FTAs and BITs—especially those involving the United States. Like the first report, it was written by an international group of experts whose goal is to help inform discussions and decisions by policymakers at the IMF and elsewhere that will have implications for the economic health and development trajectories for countries around the world.

The Task Force and both reports are part of the Global Economic Governance Initiative (GEGI), a joint program of the Frederick S. Pardee Center for the Study of the Longer-Range Future and the Center for Finance, Law & Policy at Boston University. Boston University Professor and Pardee Faculty Fellow Kevin P. Gallagher is the program’s director.

The June 2012 workshop was co-chaired by Kevin P. Gallagher and Leonardo E. Stanley. The pair co-authored a Pardee Center Issues in Brief in September 2012.

In addition to Gallagher and Stanley, contributors to Capital Account Regulations and the Trading System: A Compatibility Review include:

Annamaria Viterbo (scroll down page at link to see her bio)