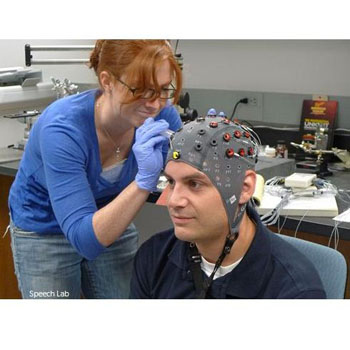 The University-wide Center for Systems Neuroscience (CSN) brings together our faculty from across the campuses and the disciplines. It has a strong partnership with the Graduate Program for Neuroscience and is housed in the new Rajen Kilachand Center for Integrated Life Sciences & Engineering. The Director of the Center (CSN) is Dr. Michael Hasselmo, member of the American Academy of Sciences and leader in Learning and Memory.

Researchers studying cognitive neuroscience aim to improve our understanding of the biological mechanisms that give rise to behavior and cognition.  Over the last few decades the development of neuroimaging technologies has catalyzed progress in cognitive neuroscience, providing scientists with a window into the brain and mind. At the Cognitive Neuroimaging Center (CNC), a multidisciplinary team of researchers comes together to increase our understanding of brain function by linking across multiple levels. The CNC is home to several state-of-the-art facilities including a brand new 3T Siemens MAGNETOM Prisma MRI scanne

The Cognitive Rhythms Collaborative (CRC) is a group of scientists in the Boston area who work together to advance our understanding of the brain dynamics underlying cognitive functions such as sensory processing, attention, learning, memory and motor planning.  It is directed by Dr Nancy Kopell, member of the National Academy of Sciences and outstanding mentor in the BU Neuroscience Graduate Program specialization in Computational Neuroscience. The members of the CRC come from multiple institutions around the Boston area and beyond.

Center for Memory and Brain

The Boston University Center for Memory and Brain (CMB) was established as a center of excellence in research, training, and teaching in the cognitive neuroscience of memory. It was founded by the late Professor Howard Eichenbaum and continues in its mission with directorship by Professors Michael Hasselmo, Marc Howard, and Chantal Stern and with administrative care by Ms. Denise Parisi. The CMB is composed of faculty within the Departments of Psychology, Biology, Mathematics, and Biomedical Engineering. The small core group of neuroscientists that compose the CMB complement each other in technical abilities and share the specific interest of characterizing brain mechanisms of memory. The CMB is unique in close working relations among its faculty in a continuity of expertise across the levels of analysis of memory. They pursue complementary and collaborative studies aimed at describing the “circuit diagram” for memory in the human brain, they teach at all levels and train neuroscientists in this field.

The Boston University Hearing Research Center (HRC) includes 20 faculty members from six departments in four Boston University schools and colleges. The HRC was formed in 1995 for the development and dissemination of knowledge that will improve the nation’s auditory health and allow the fullest utilization of the sense of hearing.  The Director of the Center is Dr. H. Stephen Colburn, a distinguished leader in the field of hearing sciences.

The mission of the BU Neurophotonics Center is to to build and support an interdisciplinary community that can develop and broadly deploy impactful photonics technologies in the neurosciences to advance our understanding of how the brain works in health and in disease. The Center supports the training of an interdisciplinary group of graduate students coming from multiple programs at the University level which is supported by NRT NSF fellowships.

The mission of the Spivack Center is to support education and research that is at the cutting edge for deciphering the molecular, cellular, and systems level basis of human behavior and to bring clinical and basic scientists together to develop a translational perspective that will enhance the lives of people afflicted with disorders of the mind.  The Center is run by an executive committee of leaders in clinical and translational neuroscience at BU School of Medicine.  Vehicles of support include awards for novel and collaborative research, and financial stipends to visiting and resident professors.