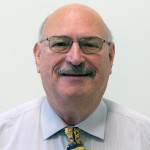 Tom Bania is a Professor of Astronomy and is a founding member of the Institute for Astrophysical Research. He studies the interstellar medium of the Milky Way and other galaxies primarily using the techniques of radio spectroscopy. He has published over 200 papers to date. Bania obtained his Ph.D. in Astronomy from The University of Virginia in 1977 for a dissertation he wrote while a Junior Research Associate at the National Radio Astronomy Observatory (“Carbon Monoxide in the Galactic Center and Other Studies of Galactic Structure”). For his thesis he made and analyzed the first large-scale map of the distribution of carbon monoxide, CO, gas in the inner region of our Milky Way Galaxy, including the Galactic Center.

To learn more about Professor Bania’s work at the IAR, view his profile here. 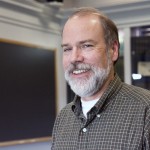 Professor Dan Clemens investigates the nature of star formation and the structure of the Milky Way galaxy using ground and space-based observatories at millimeter, infrared, and optical wavelengths. He is also an instrumentalist, having recently built Mimir, a multi-function near-infrared imager, spectrometer, and polarimeter for the Perkins telescope in Flagstaff, Arizona. With Mimir, he and his students are conducting a large-scale survey of the magnetic field of the Milky Way called GPIPS, an acronym for the Galactic Plane Infrared Polarization Survey. He was a member of the team that conducted the Galactic Ring Survey (GRS) using the 14 meter Five College Radio Astronomy Observatory, under the direction of Professor Jackson. Clemens also led the Boston University component of the GLIMPSE Legacyclass survey of the Milky Way’s disk, conducted by the Spitzer Space Telescope.

Learn more about Professor Clemens’ research on his website.