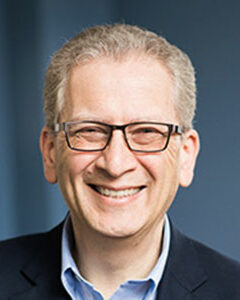 Azer Bestavros is the Founding Director of the Hariri Institute for Computing at Boston University. He is a Professor in the Department of Computer Science in the College of Arts and Sciences and holds affiliated appointments in Electrical and Computer Engineering and in Systems Engineering.

Created in 2011, the Institute supports the BU computing community by incubating collaborative, cross-disciplinary research and training initiatives. As director, Bestavros led several major university initiatives, including the Data Science Initiative, which was launched in 2014 and aims to expand the University’s data science footprint through new programs, tracks, and faculty support initiatives. Serving as co-chair of the Council on Educational Technology & Learning Innovation, Bestavros supported the successful incubation of the Digital Learning Initiative, which has matured and joined with additional entities to form the University’s Digital Learning & Innovation group. Bestavros led BU’s faculty involvement in the conception of the Massachusetts Green High-Performance Computing Center (MGHPCC), which provides world-class computational infrastructure for research, education and outreach activities. Under his leadership, the Institute served as anchor for a number of other initiatives, including the Digital Health Initiative, the AI Research Initiative (AIR), the Cyber Security, Law, and Society Alliance, the Software & Application Innovation Lab (SAIL), and the BU Spark! Program for student-driven innovation.

With Professor Bestavros at the helm, the Hariri Institute for Computing has been actively engaged in the pursuit of ambitious, high-risk, high-reward projects. Notable projects housed at the Institute include the Massachusetts Open Cloud (funded by $20M from industry and $3M from state government), Modular Approach to Cloud Security (funded by a $10M NSF Frontier grant), the Red Hat Collaboratory for advancing open-source innovation and the Honda Research Institutes Collaboratory for advancing privacy-preserving AI (funded by recurring $1.5M per year partnerships with Red Hat Inc. and HRI Europe), and the Smart-city Cloud-based Open Platform and Ecosystem (funded by $1M+ from NSF and project partners). These projects, along with additional Institute-enabled research, position Boston University as an academic leader, working at the nexus of cybersecurity, cloud computing, and data science to create a better society through innovative and collaborative research.

A distinguished educator and scholar, Professor Bestavros pursues research in networking, distributed computing, cybersecurity, and high-assurance systems. His seminal contributions include pioneering studies of web push caching through content distribution networks, self-similar Internet traffic characterization, game-theoretic cloud resource management, and safety certification of networked systems and software. His current research is focused on design, implementation, and deployment of scalable software platforms for privacy-preserving big-data analytics, and the use of edge clouds for control of cyber-physical systems.  Funded by over $44M from government and industry sponsors, his research has yielded 19 PhD theses, 8 issued patents, 2 startups, and hundreds of refereed papers with over 20,000 citations and an H-index of 60.

Professor Bestavros received a number of awards for distinguished teaching, research, and service, including the ACM Sigmetrics Inaugural Test of Time Award for 1996 research work “whose impact is still felt 15 years after its initial publication”  and the 2010 United Methodist Scholar Teacher Award in recognition of “outstanding dedication and contributions to the learning arts and to the institution.”  In 2017, he was named a William Fairfield Warren Distinguished Professor, the highest distinction bestowed upon senior faculty members at Boston University for “representing our community with distinction, enriching the academic experience for our students, and raising our stature as a major research university.”

Prior to his inaugural role at the Hariri Institute for Computing, Professor Bestavros chaired the Computer Science Department at Boston University from 2000 to 2007, having joined it 1991 after completing his PhD in Computer Science from Harvard University under the late Thomas E. Cheatham, one of the “roots” of the academic genealogy of applied computer scientists.