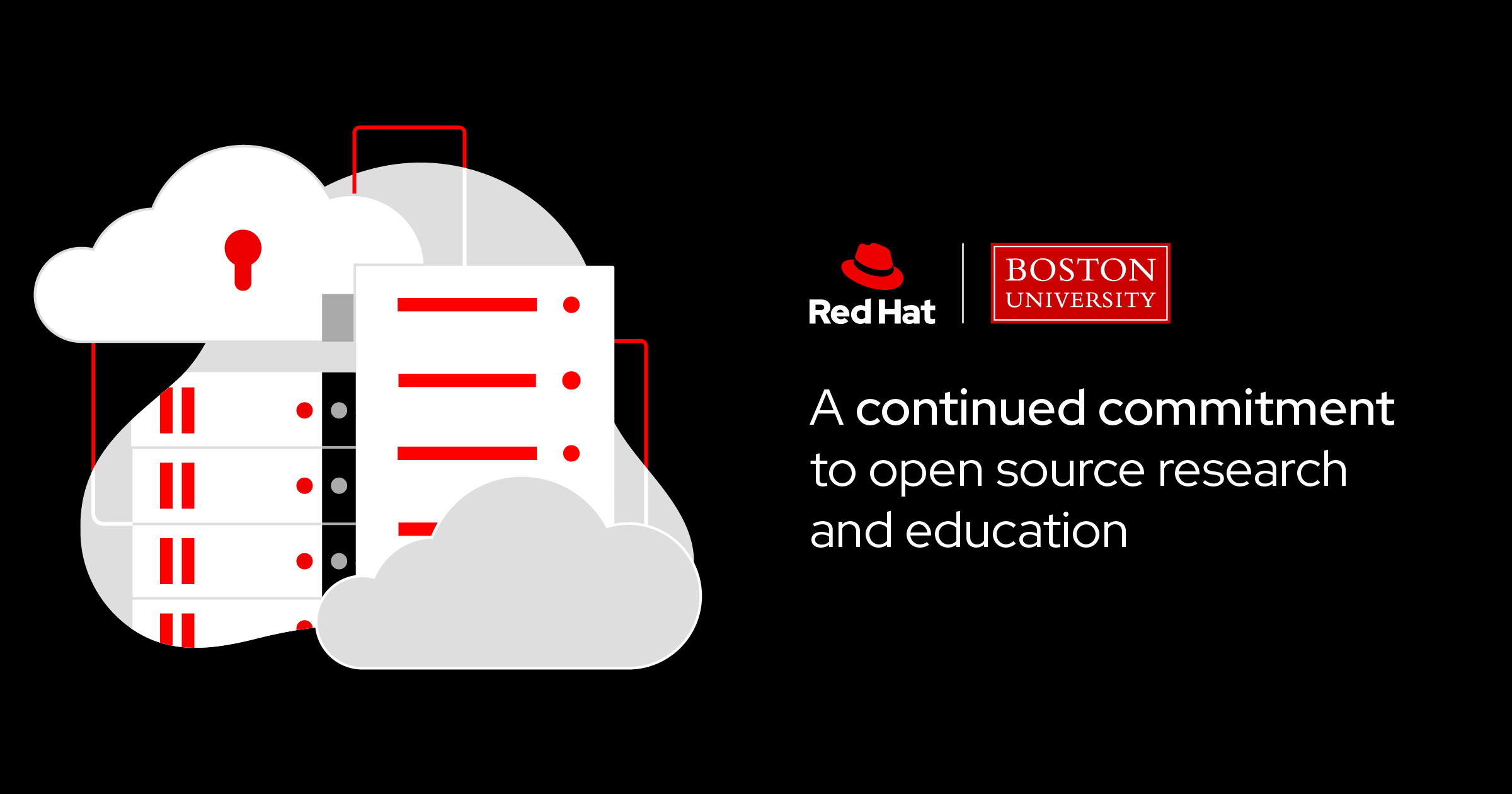 $20 million grant enables an ecosystem of education, research, and technology to scale the open hybrid cloud

Boston University (BU) and Red Hat announced a $20 million renewal and expansion of their partnership at Red Hat Summit 2021 to drive new talent, processes, and innovations for the open hybrid cloud. Over the next five years, the Red Hat Collaboratory, housed within BU’s Hariri Institute for Computing, will lead integrated initiatives in open-source development through its commitment to research, education, and technological advancement.

Red Hat’s continued support is positioning the Hariri Institute as an incubator of academic, government, non-profit, and industry partnerships in cloud computing. Red Hat is also providing the Collaboratory with generous software subscriptions to help grow a series of interrelated projects that form a new Hariri Institute-hosted open research cloud initiative.  This initiative will enable close collaboration between production operations, systems research, and developers in the open source community.  It is the first regional node in a broader open cloud being developed under the umbrella of OpenInfra Labs.

Since its formation in 2017, the Red Hat Collaboratory has fostered relationships between BU faculty, students, and Red Hat engineers to enable an open cloud computing ecosystem and empower the next generation of data scientists. “The engagement with Red Hat has enabled us to create partnerships where students can actually focus on research, but in a way that’s impacting a real system,” said Orran Krieger, Co-Director of the Red Hat Collaboratory and Professor in Electrical & Computer Engineering at BU. BU and Red Hat’s expanded partnership will generate even more opportunities for BU students to develop open-source software that propels cutting-edge cloud technologies and advances secure cloud-based artificial intelligence, computing, and data science.

The open hybrid cloud is a technological infrastructure that connects multiple computers through a public or private network, allowing for large-scale data storage, computing, and management. “The open hybrid cloud is central to the modern computing and data science environment,” said Hariri Institute Director Eric Kolaczyk, a Professor in Mathematics and Statistics at BU, “The fact that Red Hat is dedicated to open-source software development makes it an ideal partner for scaling the open hybrid cloud.”

Researchers outside of BU will also reap the benefits of this expanded partnership through a new open research cloud initiative. This initiative will make available cloud resources to a broad community of researchers, with a focus on academic partner institutes of the Massachusetts Green High Performance Computing Center (MGHPCC), including BU, Harvard University, Massachusetts Institute of Technology, Northeastern University, and the University of Massachusetts. “Our continued partnership with Red Hat is going to enable multiple other partnerships, and in doing so, is going to elevate not only cloud computing research, but also data science and computational research,” said Kolaczyk.

Additionally, the Red Hat Collaboratory will expand its support of BU students and interns that work with Red Hat engineers to scale the open hybrid cloud. “It’s been really neat to see the look in a student’s eyes when they actually see their stuff going upstream, and being used and integrated into an open-source project,” said Krieger. During the 2019-2020 academic year, BU students made up 14% of all Red Hat Summer interns and this number is expected to grow with the expansion of the partnership. “I am hoping for two big things: 1. We are able to create an entity at BU that is nationally known for work in distributed systems at scale and managing those systems 2. We are able to attract more students and researchers that want to work in that area,” said Brock.

The Red Hat Collaboratory’s experiential learning opportunities prepare BU students for industry research. Oindrilla Chatterjee was an intern at Red Hat in 2019, and transitioned to a full-time data scientist role within the office of the Chief Technology Officer at Red Hat after the internship ended. As a student, Chatterjee took advantage of some of the courses offered at BU through the Red Hat Collaboratory and gained insight into how industry professionals apply coursework to the real world. As an intern, the support that Chatterjee received from her Red Hat mentors helped her feel confident in her abilities as a researcher. “We [interns] were treated like full time employees. We got to sit in on the same meetings and all of our ideas, suggestions, and feedback were encouraged equally,” said Chatterjee. Hema Veeradhi, a software engineer on the AI Operations Team at Red Hat, agrees with this sentiment. “I’ve been on both sides–as an intern in 2018 and now mentoring current interns. At Red Hat we do want to really help students grow,” said Veeradhi.

Expansive, open partnerships, like the one forged between BU and Red Hat, are critical to the advancement of research. Science and technology can grow rapidly when researchers work together to solve problems, recently exemplified by the swift development of coronavirus vaccines. What impacts one part of the globe can impact everyone else, and leveraging the world’s openness through an open-source model can lead researchers to discover new technologies and knowledge across disciplines. “The relationship we built with Red Hat is really important towards this new kind of approach of interdisciplinary, convergent research to try to solve big, societal problems,” said Krieger.