Event Highlights: Make the World Think Again: Reason, Hope, and Faith in an Age of Populism – A Lecture by Tomas Halik

“A spectre is haunting Europe — the spectre of communism,” was the dramatic quote Tomas Halik used to begin his lecture on March 28th, a line taken from the opening page of The Communist Manifesto. Halik started the discussion by speaking about the 150 year legacy of communism in Europe and the world, emphasizing how after the non-violent 1989 revolutions many nations were determined “to build a new democratic, just, and free society.” He spoke about post-communist countries finding the concept of a powerful and united Europe immediately attractive, and how they believed their future advancement was centered upon joining the European project and promoting Western liberal democracy. 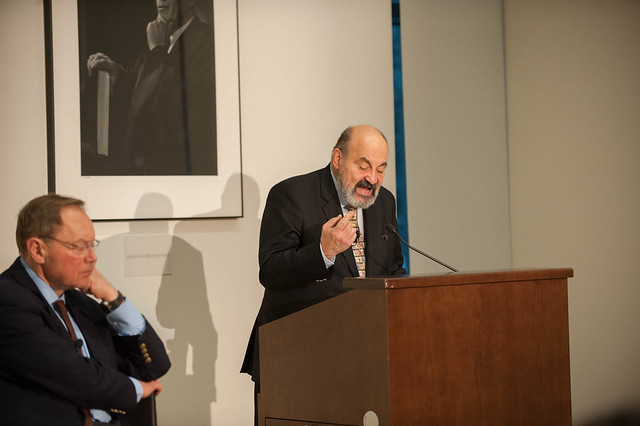 Halik, however, said that these grand ideals have not been fulfilled, warning that and that the world is in the most dangerous place it has been since the end of WWII. He gravely noted “a new spectre is haunting Europe – the spectre of populism, nationalism, terrorism, and political extremism.” Halik asked the audience whether these monsters were really unique to the contemporary environment, citing the 1930s era of fascism as a comparative global environment where financial pressures produced such negative social and political reactions. He announced that the greatest consequence of these extremist views is the emerging “crisis of confidence” in which people believe that the present system is incapable of fulfilling expectations.

After discussing the dissent of many populations across Europe and the cynicism in existing institutional frameworks, he turned to criticizing the role of social networks in the fundamental breakdown of the space traditionally reserved for public debate – a centerpiece of classical democracy. Groups of people become “entrapped in their bubbles,” only consuming information that supports their existing convictions and emotions, isolating them from any alternative visions and perspectives on the world. Halik emphasized that such narrow-minded thinking has been exacerbated by the traditional media. He explained how the press has been contributing to the same polarization in reporting on contemporary issues, especially in regards to the phenomena of extremist violence. Halik claimed that the media has inadvertently become the principle allies and tools for terrorists, given that the prime concern of these individuals and factions is not the killing of innocent people but the dissemination of the event to the broadest audience possible.

He then turned to a brief discussion of the interrelationship between politics and religion and the rise of extremist elements in both arenas. In discussing the question of guilt, Halik harshly criticized those who remain complicit during political turbulence, claiming that the the “silent anonymity” of those who stand by the controversial decisions of their leaders are also responsible. He clarified that he cannot condone the usual paths of coming to terms with guilt (witch hunts and displacement of responsibility), instead arguing that a balance between the two extremes is “necessary to seek and to implement a tenuous process of reconciliation and genuine healing.”

Halik then transitioned into a discussion of modern Czech democracy after the fall of communism, explaining some of the difficulties the nation faced with a metaphor: “institutions are like bodily organs – if they are to live and function properly they need blood to circulate, and that role is performed by civil society.” He spoke about the rising tide of populism around the globe today, citing how the 2016 elections in the UK and USA demonstrated that “even the Anglo Saxon world is far from immune to populism.” Arguing that the crisis of real democracy is not only a crisis of confidence in the democratic system, credibility of liberal ideas, and contemporary type of capitalist economy but instead a more profound crisis of confidence in general, Halik analyzed the trend of society becoming increasingly centered upon the individual. He explained how the lack of social cohesiveness leads individuals to feel isolated, resulting in a broader crisis of identity which causes people to turn toward a collective group identity centered upon strong emotions, such as anger and fear of the unknown.

Halik ended the lecture portion of the event by speaking on what he believes to be the greatest division in society today: the access to education. He argued that people without educational advantages feel left behind by those profiting from globalization, resulting in individuals feeling lost, frustrated, and isolated in communities all over the world. These people receive their information from social media, seeing the platform as an opportunity to share their voice and views (which Halik reminded the audience is a dangerous negative feedback loop cycle that feeds isolated groups information that supports their established preconceptions and opinions). Announcing the need to build bridges between the various schisms in society, he specifically called upon the Church to bring the Islamic world and Western liberal societies together. Pope Francis has transformed the Christian Church from an impenetrable and foreboding fortress into what Halik referred to as a ‘field hospital’, reacting to contemporary global issues and adopting opinions on modern challenges. He stressed that Christianity should be a hope for the future, remaining flexible to transform and adapt to contemporary conditions in an effort to actively respond the varying emerging threats facing the world today as “liberal democracy also needs a moral vision.”

You can watch the entire event on the EU for You channel on YouTube.

This event was organized as part of EU Futures, a series of conversations exploring the emerging future in Europe. The EU Futures project is supported by a Getting to Know Europe Grant from the European Commission Delegation in Washington, DC to the Center for the Study of Europe at Boston University.

There are no posts in News from the last 6 months.