The Paul Streeten Distinguished Lecture in Global Development Policy celebrates the example and legacy of Professor Paul Streeten as an eminent economist and interdisciplinary scholar who has had a significant impact on global development policy through his work with the World Bank, the United Nations Development Program, and UNESCO. Streeten joined Boston University’s Department of Economics as a Professor in the mid-1970s where he also served as Director of the Economics Department’s Center for Asian Development Studies and then as Director of the World Development Institute. He published his best-known books during this time, such as Development Perspectives (Macmillan, 1981) and First Things First: Meeting Basic Human Needs in the Developing Countries (World Bank, Oxford University Press, 1981). His stature in the field of development helped attract numerous younger students and mid-career public officials from around the world to come to study at Boston University. The joint sponsorship of this lecture by Boston University’s Global Development Policy Center, the Institute for Economic Development, and the Department of Economics reflects the breadth of his engagement at Boston University, the rigor of his scientific research, and the inspiration he has given younger scholars to pursue interdisciplinary research on pressing development problems. 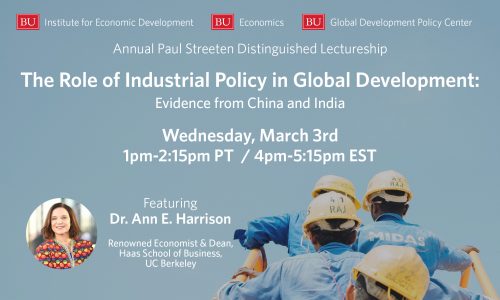 The Role of Industrial Policy in Global Development: Evidence from China and India

The role for the state versus the market has been a topic of great debate since the age of Louis XIV. While free enterprise and competition can foster great innovation, the unfettered state has also been host to many excesses. What is the right balance between free markets and state support? Join Boston University’s Global Development Policy Center, the Institute for Economic Development, and the Department of Economics for the annual Paul Streeten Distinguished Lecture in Global Development Policy on Wednesday, March 3, 2021.

The 2021 Distinguished Speaker is Dr. Ann Harrison, renowned economist and Dean of the Haas School of Business at UC Berkeley. Dr. Harrison conducts research on multinational firms, foreign direct investment, international trade and global strategy, emerging markets, China and India. She has dedicated her career to creating inclusive and sustainable policies in development economics, international trade, and global labor markets. In 2017, Dr. Harrison and her co-authors were awarded the Sun Yefang Prize by the Chinese Academy of Social Sciences, which is considered one of China’s most prestigious honors in economics.

Relying on history and economics, Dr. Harrison will summarize the state of the literature on the effective role of the state in promoting innovation and growth, drawing on examples of India and China. Following the lecture, Dr. Harrison will answer questions from the audience. Kevin P. Gallagher, Professor of Global Development Policy and Director of the GDP Center, and Dilip Mookherjee, Professor of Economics, and Director of The Institute for Economic Development, will introduce and moderate the discussion.