Richard Laursen retired after forty-three years at BU (1966-2009), during which he played a key role in helping the Department of Chemistry achieve its current leadership position in research and education.  He received his BS in chemistry in 1961 from the University of California, Berkeley.  He earned his Ph.D. in organic chemistry in 1964 at the University of Illinois at Urbana-Champaign, working with Dr. Nelson Leonard. In six months, he had synthesized and determined the structure of the DNA base derivative, dihydrotriacanthine and investigated the molecule’s biological properties. This work started his life-long fascination with biochemical problems. Professor Laursen did his postdoctoral work at Harvard with Frank Westheimer, focusing on the active site of acetoacetate decarboxylase and initiating work on solid-phase Edman degradation of peptides.

In the 1970’s, protein and nucleic acid research was unexplored territory.  Professor Laursen recognized the vast potential for biological discovery in protein sequencing, which became the focus of his newly established lab at BU.  While at Harvard, he had found Edman degradation chemistry tedious and laborious. Although it was the benchmark for sequencing amino acids, he imagined there had to be a better way to determine a protein’s primary structure. With the recent invention of solid-support peptide synthesis, he determined to synthesize and sequence peptides on a solid support.   In 1970 he developed one of the first automated peptide and protein sequencing instruments, which two of his PhD students successfully marketed as the “Laursen Sequencer.”

In 1975 Professor Laursen and two of his students, Alex Bonner and Marc Horn, organized the “The First International Conference on Solid Phase Methods in Protein Sequence Analysis” at BU to facilitate idea exchange among researchers involved in automated sequencing. Since then, 18 biennial conferences have been held worldwide.

Professor Laursen went on to determine the primary structures of numerous proteins and peptides – including the first ribosomal protein, human plasminogen, mussel adhesive protein and ginger root proteases. More recently, he and co-workers synthesized a peptide mimic of α-helical type I antifreeze protein, elucidating the crystal growth inhibition mechanisms of this unique protein.  In 1988, Professor Laursen became the first recipient of the Millipore-sponsored Pehr Edman Award “for outstanding contributions to the methodology of protein sequence analysis.”

Over the past decade, Professor Laursen’s interests have turned from peptides to paints and dyes. He and co-worker Xian Zhang have initiated studies on natural dyes found in ancient fabrics, tapestries and paintings. After his sabbatical from BU at the Metropolitan Museum of Art, they implemented their new extraction method to successfully characterize and identify the plant source of yellow dye flavanoids found in north Peru’s pre-Columbian textiles. Professor Laursen has traveled through China’s Gobi Desert, cave temples in Xinjiang Province, and into Uzbekistan to collect historical textile threads. He strongly believes “face to face contact” is vital to understanding native cultures and for showing respect for their sacred works of art.

Professor Laursen has received multiple awards, including the NIH Research Career Development Award (1969-1974), the first ever received by a BU investigator. He was a guest scientist at the Max Planck Institut für Moleculare Genetik in 1971, an Alfred P. Sloan Fellow (1972-1974), and an American Association for the Advancement of Science Fellow in 1990. In 1998, Rich was awarded honorary professorship “for great contributions to life science research” by Hunan Normal University.

As an educator, Professor Laursen has inspired decades of students to pursue chemistry and biology for practical applications. Many of his lab members have transitioned into successful industrial careers.   As a scientist, he has made seminal discoveries in protein sequencing and art history. “Whether it was solvent flow or dye molecule extraction, Rich’s thinking has been unfailingly outside of the box,” recalls former graduate student, J.D. Dixon. 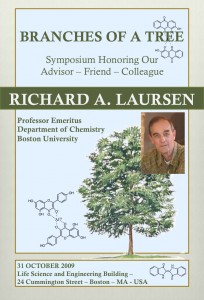 BU recognized Professor Laursen’s contributions by promoting him to its ranks of Professor Emeritus and honoring him as a renowned leader in scientific discovery. His retirement celebrations were held on 30 October 2009.  The next day his many students came from all over the world to honor him with a symposium, “Branches of a Tree.”  You can view the album versions of both the Laursen Party Album and the Laursen Symposium Album. These students have also moved forward with establishing the Laursen Fund.