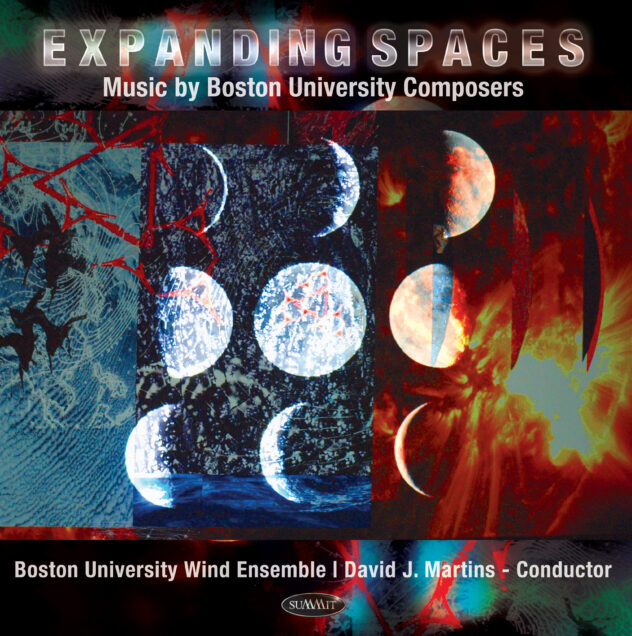 The unique process of recording the CD brought together three premieres of original work by BU composers who wrote the pieces for the BU Wind Ensemble. Conductor David Martins was thrilled to showcase the quality and professionalism of the School of Music’s exceptional wind program and help put the student musicians and faculty composers and conductors on the map. After the multi-year project which featured many student musicians, Martins reflected: “I’m extremely proud of these students – their performing capabilities, and just who they are as humans.” According to Martins, students were thrilled to be a part of the process of the recording endeavor. “They realized how valuable of an educational and professional experience this was.”

Expanding Spaces is a collaborative project between the Boston University Wind Ensemble and four Boston University faculty composers to perform and record contemporary works related to the theme of expanding space. Three of these works, “Squares and Oblongs” by Rodney Lister, “four scenes for Juliet” by Ketty Nez, and “The Vacant Shore” by John Wallace were commissioned for this project. The fourth work, “Solar Prominences” by Richard Cornell, was commissioned for the Concord (Massachusetts) Band in 1988 for their 25th anniversary season.

Under the visionary leadership of Professor David Martins, the ensemble regularly performs standard repertoire from a span of over four centuries as well as modern works and premieres. In 2014, they premiered the wind ensemble transcription of John Williams’s Tuba Concerto with Mike Roylance, principal tuba of the Boston Symphony Orchestra. In 2018, the ensemble performed the US premiere of Gregory Fritze’s Bass Trombone Concerto with Gabriel Langfur, bass trombonist of the Rhode Island Philharmonic and Vermont Symphony Orchestras. This is the ensemble’s third full-length album: in 2013 they released a recording of Ketty Nez’s Piano Concerto entitled “thresholds”, and in 2015, an album of trumpet concerti with world-renowned soloist Terry Everson.

The Boston University Wind Ensemble is the premiere performance major symphonic band in the School of Music. Under the baton of Professor David Martins, the Wind Ensemble is designed to prepare wind, brass, and percussion players for professional careers in ensemble performance. It also provides future music educators with standard teaching concepts and methods related to the study of band repertoire and performance. The Wind Ensemble has received critical acclaim for its outstanding level of performance.