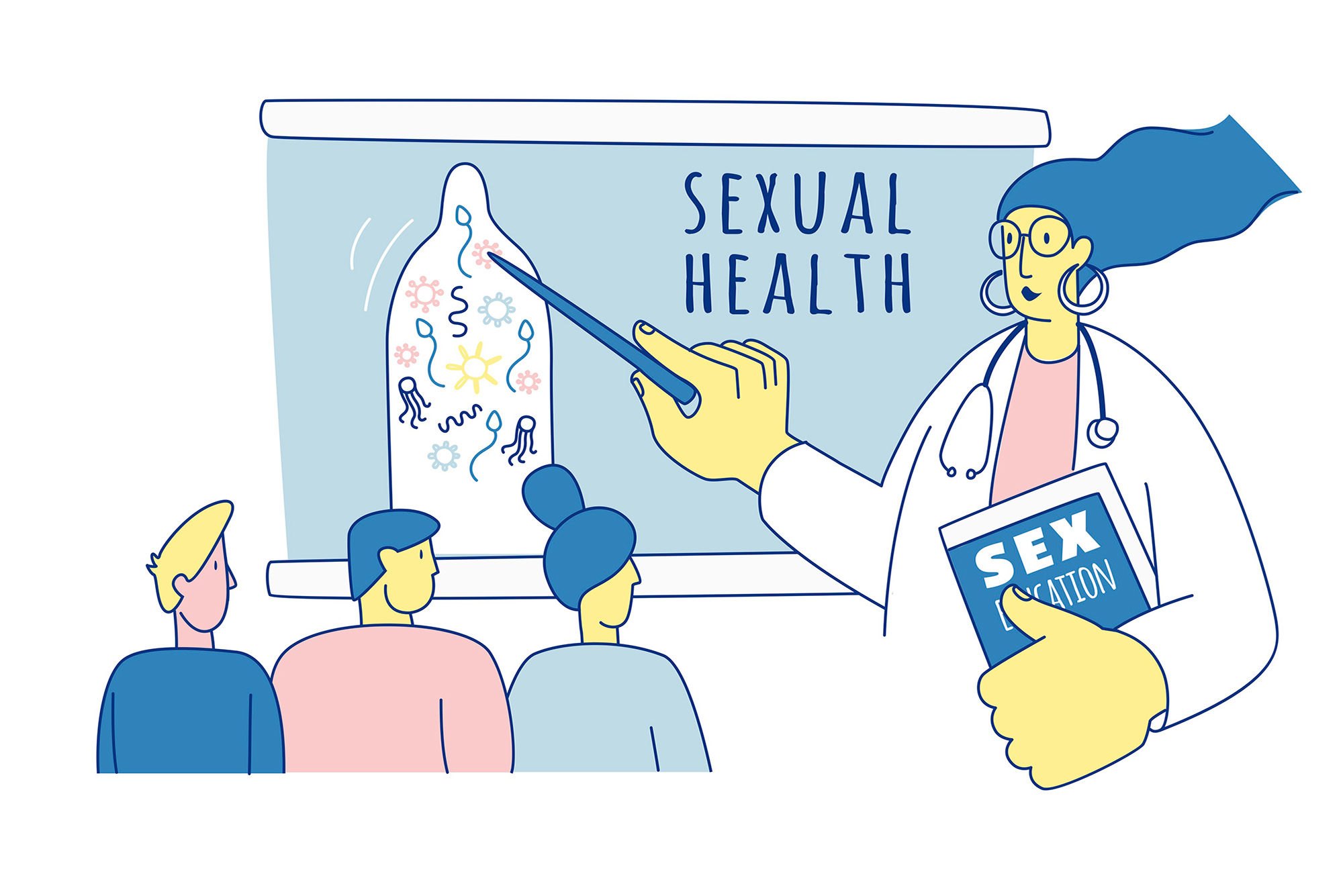 If high-quality sex ed is needed to prevent unwanted pregnancies after the Supreme Court overruled a national abortion right, the United States is in trouble, BU experts say. Photo illustration by iStock/sv_sunny

To the naked eye, Massachusetts could not appear any more blue on issues like gun control, voting rights, climate change, or abortion. But when it comes to sex education, it has refused to join 11 other states that mandate sex ed be taught, with medically accurate content, in elementary or secondary schools.

“This is one area where we are in some company with states that we don’t usually want to be in company with,” says Sophie Godley (SPH’17), a School of Public Health clinical associate professor of community health sciences. Bay State activists have advocated futilely for mandatory sexual education, but they have been stymied, she says.

With the Supreme Court overturning Roe v. Wade and its national right to abortion, avoiding unwanted pregnancy will depend even more on  delaying sex or using contraception. That makes quality sex education even more important. Yet if Massachusetts, of all states, which brought the country same-sex marriage, isn’t teaching sex-ed well, what’s the state of the rest of the nation?

Godley’s sobering answer: “Time and again, the sexuality education that happens across the country is of really poor quality.”

Recipient of a 2017 Metcalf Award for Excellence in Teaching, Godley speaks as both researcher and long-time sex ed consultant with public, private, and religious schools in Massachusetts. (She also taught a sexuality education course at a Seattle community college and used to work for the Massachusetts Department of Public Health.)

Yet even when it is taught in states that don’t require it, and some that do, too often it is not medically accurate, Godley says.

“It doesn’t truly answer children’s questions, and it doesn’t equip young people with the information and the skills and the knowledge that they need,” she says. “What happens with sexuality education in the United States is that your geography is your destiny. Where you’re born, or more importantly, where you go to school, largely determines whether you’re going to receive medically accurate, evidence-based, scientifically proven effective education.”

(In the absence of a mandate, 28 percent of Massachusetts schools teach what the Centers for Disease Control and Prevention deems a full, accurate sex ed curriculum in grades 6, 7, or 8, while 62 percent teach the curriculum in high school. “Mandating local control over sex education presents unique challenges that have resulted in a glaring disparity [in Massachusetts] regarding the quality of sex education that students receive,” says SIECUS (Sexuality Information and Education Council of the United States), a Washington, D.C., nonprofit advocacy group.)

Doctoral student Caitlin Cooper (Wheelock’26), who researches sex education and students with intellectual disabilities, echoes Godley’s dim view of the state of instruction, and says that students with disabilities begin at an even greater disadvantage.

They “are more likely than their nondisabled peers to engage in risky sexual behavior—early sexual debut, multiple partners, sex without contraceptives,” says Cooper, a former special ed teacher who says she did “frequent, informal sex ed work” with her students. “We see that those students also become pregnant and contract STIs [sexually transmitted infections] more commonly.

“The United States has notoriously bad sex education across the board,” she adds.

Now that the recent SCOTUS decision has turned regulation of abortion over to individual states, Godley can point on a map to states where she worries there could be spikes in unplanned pregnancies: Texas, Louisiana, Mississippi, Tennessee, South Dakota. In those places, she says, sex ed is “working against the public health evidence. Because what they’re providing emphasizes abstinence, emphasizes shame, emphasizes guilt, fear.”

Research confirms that abstinence-only sex ed doesn’t work, for a reason one study summarizes thus: “Although abstinence is theoretically effective, in actual practice, intentions to abstain from sexual activity often fail. Given a rising age at first marriage around the world, a rapidly declining percentage of young people remain abstinent until marriage.”

Time and again, the sexuality education that happens across the country is of really poor quality.

“Many of us hope kids delay [sex] for lots of different reasons,” Godley says. “Waiting until you’re physically, emotionally, socially ready is really important. [But] abstinence-only sexuality education denies kids any information about how to prevent sexually transmitted infections and pregnancy, except for not having sex.”

Cooper says she followed the comprehensive model during her informal instruction with special-ed students. “The conversations I was having with my students were largely reactive—a student would confide a pregnancy, and we would go from there—rather than proactive,” she says. “Given the way that sex education is set up in the United States, this is often educators’ only option. That is, educators are typically discouraged from addressing sexuality until there is a problem.”

While the teen birth rate has declined in recent decades (although it is higher among LGTBQ students than among heterosexual ones), Godley attributes the drop not to sex education in schools, but to out-of-school, nonprofit-run sex ed programs, and to the increasing availability of long-acting, reversible contraception. And, she adds, teens have actually never been the highest users of abortion.

Rather, older people, typically low-income, have relied on Roe to have an abortion. Factor them in, she says, and “over 50 percent of pregnancies in this country are unplanned.” Not all unplanned pregnancies are unwanted, she notes. But enough are that in 2020, 930,000-plus abortions were performed. That doesn’t include those induced by abortion pills that people obtained on their own.

“We are a huge outlier in terms of countries that we like to compare ourselves to,” Godley says. “Pregnancy and birth are much more intentional and planned in countries in Europe, in Japan, in Korea—really, across the globe.”

“I feel like we’ve been pushing this rock up a hill forever, and it’s just painful that we don’t seem to be able to accomplish it,” she says.

That frustration is anchored in personal experience. She has taught an introduction to public health class at BU since 2010. “Every semester, I ask the students what kind of sex ed they got,” Godley says. “And every semester, I have this optimism that none of them will report back that they’ve had these ineffective, shame-based programs.”

Her optimism is inevitably dashed. “Every damn semester, 5, 10, 20 students raise their hand.”