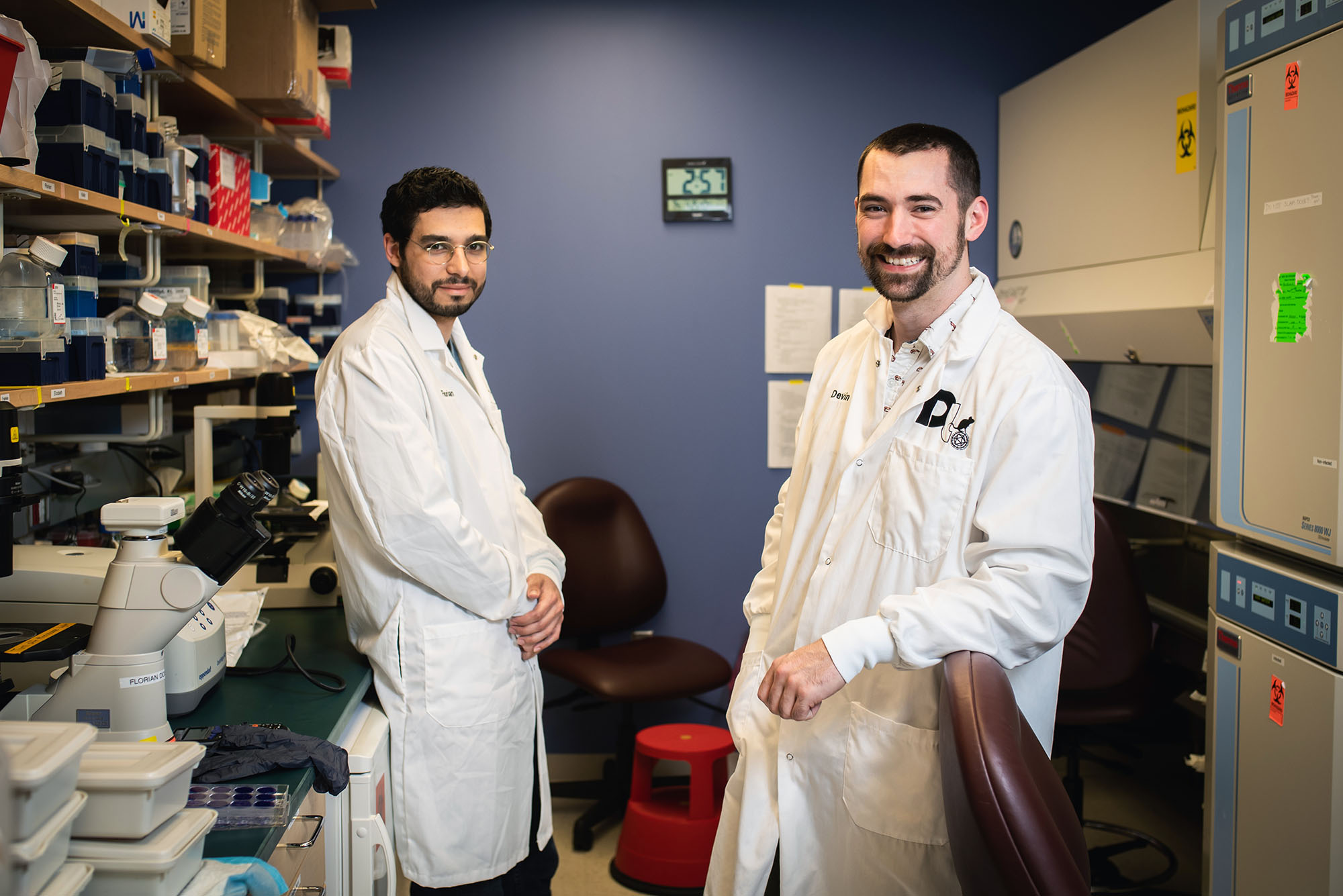 Florian Douam (left), a BU School of Medicine assistant professor of microbiology, and Devin Kenney, a PhD student in Douam’s lab, say their findings could propel the development of drugs that better prime immune systems for taking on the coronavirus.

Why Do Some People Get Sicker than Others from COVID?

COVID-19 vaccines have saved at least a million lives in the United States alone, but for many people, a lingering fear remains: if—or when—they get hit by the coronavirus, just how bad will it be? Will they breeze through with little more than a sore throat—or will it saddle them with long-term complications, perhaps even push them to the brink of death?

Since SARS-CoV-2 first began storming around the world in early 2020, COVID-19 has claimed six million lives and counting, according to the World Health Organization. And yet, the vast majority of people who’ve contracted COVID—some 99 percent of the more than 500 million confirmed cases—have survived their brush with the disease.

So, why is it that some people are so badly affected by COVID when many are barely scratched by it? Age and other health conditions increase the risk of getting really sick, but a new study suggests that those who escape the worst symptoms might also have the right balance of a type of immune cells called macrophages.

White blood cells found in every tissue, macrophages—part of a group of cells called myeloid cells, the guards of the immune system—are healers. They’re crucial in wound repair, streaming to an injury to help the body patch itself up. They also take on invaders, gobbling up and digesting anything that looks like it doesn’t belong in the body, from dead cells to harmful bacteria. That attack mode helps keep us healthy, but it also seems to be a factor in severe COVID-19 cases. Evidence has been growing that many COVID deaths are caused by a hyper-immune response: rampaging macrophages attacking not just the virus, but also our bodies, causing excessive inflammation and damaging heart and lung tissue.

Douam (right) and Kenney (left) studied lungs that seem to easily deflect or recover from SARS-CoV-2 in order to better understand why most people survive COVID. Douam says the work they are “doing here is really upstream” and could lay the foundation for future immunotherapy strategies.

In a study published in Cell Reports, a team of researchers at Boston University’s National Emerging Infectious Diseases Laboratories (NEIDL) and Princeton University looked at why that was happening, examining COVID’s impact on those who get dangerously sick—and those who don’t. By studying lungs that seem to easily deflect SARS-CoV-2 or quickly bounce back from infection, they found a set of genes that determine whether immune cells mount a solid defense—or turn rogue and land someone on a ventilator. The findings could help efforts to develop new drugs that better prime immune systems for taking on the virus.

“If you can understand why most people are protected against COVID and how their body protects them, then you could potentially harness this knowledge to develop therapeutics and other advances,” says Florian Douam, a BU School of Medicine assistant professor of microbiology who coled the study.

Why Are Some Lungs Protected against COVID?

After two years of sickness and swabbing, there’s a lot scientists know about how SARS-CoV-2 is transmitted and how our bodies react when we get it—but there’s also a lot they don’t understand. Take the lungs: We know COVID-19 can leave lungs full of liquid and inflamed, sometimes scarred by sepsis. But most of what’s known about COVID in the lungs is driven by samples taken from those who died from the disease—not those who lived through it.

“You can only access the lung when the patient dies,” says Douam, who’s based at NEIDL. “You cannot obviously get someone who had a mild disease and tell them, ‘Oh, give me your lung.’ In contrast to lung autopsy samples from diseased patients, the lungs from milder or asymptomatic patients are just much harder to access. When you have the diseased lung, you get a snapshot of the end-stage disease.”

To get around this challenge, Douam and the research team developed a new model—a mouse engrafted with human lung tissue and bolstered with a human immune system derived from stem cells—for monitoring the different stages of SARS-CoV-2 infection and COVID-19 disease. Douam says that mice with human lung tissue, but without the human immune system, don’t react well to infection—the lung tissues are damaged in a similar way to people with a severe case of the disease. But when they studied mice that also had a humanized immune system, it was different. “We were barely seeing any virus in the lungs,” he says. “The lung was protected. Then we asked the question, ‘Why is the lung protected?’ And this is where we found the macrophages.”

According to Devin Kenney, a PhD student in Douam’s lab and lead author on the latest paper, one signature of lungs that were more severely impacted by COVID was a lack of macrophage diversity. They were dominated by a pro-inflammatory macrophage—the cells that usually respond to viruses and bacteria—called M1.

“It seems they drive this hyper-inflammatory response,” says Kenney (MED’27), “and it leads to a more severe disease state.”

By contrast, those immune systems that mixed in more of the cells that typically help in wound repair—M2 or regulatory macrophages—fared better.

“If you have a more diverse macrophage population that has both regulatory and inflammatory macrophages, you can more effectively regulate the signals driving antiviral responses, shutting them off when appropriate,” he says. “Then, the immune system can clear the virus really rapidly, protect the tissue.”

The researchers tied this positive antiviral response to a set of 11 genes they called “protection-defining genes.” In cases of effective resistance, these genes were working harder, or what’s known as upregulated.

“We now know not only that macrophages can promote protection in the lung tissue,” says Douam. “We also know the key set of genes that these macrophages need to express to protect the lung.”

What they don’t know yet is why some people can put a diverse mix of macrophages to work while others can’t. That’s a target for future studies.

“What we’re doing here is really upstream,” says Douam. “If you can generate knowledge and better understand the molecular processes driving lung protection from COVID-19, then once you get this really good comprehensive picture of what’s happening, you can start designing potential immunotherapy strategies.”

And that’s the end goal of this work. Knowing that some genes are critical in the COVID fight gives potential fresh targets for drugs. With new coronavirus variants springing up and taking root at a rapid rate, says Douam, it’s important that scientists find alternatives to medications that target the virus itself.

“The virus, over time, can start escaping these types of drugs,” he says. “It’s not the virus itself that makes you critically ill, it’s an overreaction of the immune system.”

Finding drugs that help patients have a more balanced immune response could “complement the antiviral strategy.”

Why Do Some People Get Sicker than Others from COVID?

Why Do Some People Get Sicker than Others from COVID?
0
share this