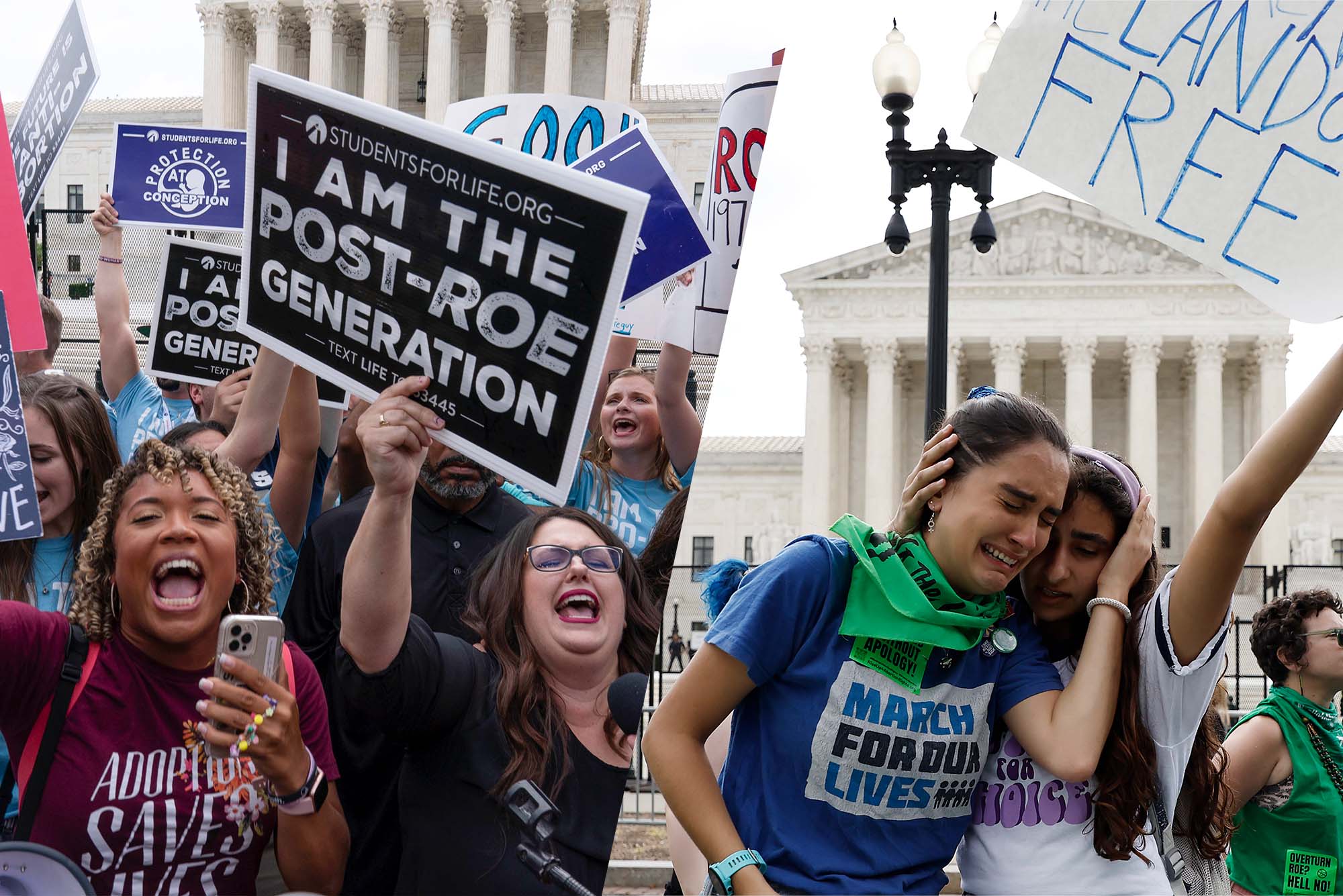 Some protestors celebrated, others wept, in front of the US Supreme Court on June 24 after the Court overturned Roe v. Wade. Photo by Jose Luis Magana/AP Photo and Anna Moneymaker/Getty Images

In a stunning reversal of 50 years of precedent, the US Supreme Court on Friday struck down Roe v. Wade, which protected the rights of women to seek abortions, leaving individual states free to ban outright or severely limit the right to a procedure that women have had since 1973.

“Roe was egregiously wrong from the start,” Justice Samuel Alito wrote in the majority opinion. “Its reasoning was exceptionally weak, and the decision has had damaging consequences… It is time to heed the Constitution and return the issue of abortion to the people’s elected representatives.”

In the final sentence of the dissent opinion, the court’s liberal justices, Stephen Breyer (Hon.’95), Sonia Sotomayor, and Elena Kagan, wrote: “With sorrow—for this Court, but more, for the many millions of American women who have today lost a fundamental constitutional protection—we dissent.”

“It is hard to overstate how unusual it is that the Supreme Court has overturned a long-standing civil right,” says Nicole Huberfeld, Boston University School of Public Health Edward R. Utley Professor of Health Law, Bioethics, and Human Rights and a School of Law professor of law. “While the implication is not that abortion is outlawed across the nation—the Supreme Court has said that the US Constitution doesn’t have much to say about this issue. So, states can decide to restrict abortion so long as their laws have a legitimate purpose.”

Huberfeld says 13 states have trigger laws that either outlaw or significantly restrict access to abortion almost immediately, and another 9 states had laws on the books before Roe that outlawed abortion. “And so when you put all of these different kinds of laws together, including a lot of the restrictions that were, you know, stopped by lower federal courts and other significant restrictions that were put in place before this litigation,” Huberfeld notes, “in half of states, abortion will now be significantly restricted or outlawed.”

The decision also moved BU President Robert A. Brown to release a statement: “I had hoped that the day would not come when I would write to express my profound disappointment over an action of the Supreme Court of the United States. However, I believe the Court’s official decision today to annul the 1973 decision of Roe v. Wade is an enormous step backward in protecting the rights of all women in our country. This decision denies women the right to make their own decisions about their reproductive health. Boston University remains steadfastly committed to guaranteeing women’s reproductive rights to the extent allowed under Massachusetts’ law.” (Read the full text of Brown’s letter at the end of this article.)

And responding to the Supreme Court ruling, on Friday Massachusetts Governor Charlie Baker signed an executive order that he says will “protect reproductive health care providers who serve out-of-state residents.”

As shocking as the Court’s decision was, it had been widely anticipated for weeks after the leak of a draft opinion by the Court in early May showing that the conservative-leaning justices, who hold a majority, would end the long-standing precedent. The final vote was 6-3.

“The leak clearly didn’t move anyone on the conservative side of the court,” says Linda McClain, a LAW professor and Robert B. Kent Professor of Law, who is known for her work on family law, gender, and sex equality.

The deciding case, Dobbs v. Jackson Women’s Health Organization, was argued over a Mississippi law that banned almost all abortions after 15 weeks of pregnancy. But that law had not yet gone into effect because lower courts had ruled that it was not in line with Roe V. Wade, which had established the right to abortion in 1973. The Court’s ruling on Friday now clears the way for the Mississippi law, and others like it, to be enacted.

McClain says one passage in the ruling was particularly alarming: a paragraph that says the Court’s decision does not automatically mean that abortion becomes a state-by-state issue, and leaves open the possibility of a nationwide abortion ban through federal law. “Most threatening of all,” she says, the ruling states “no language in today’s decision stops the federal government from prohibiting abortions nationwide, once again from the moment of conception and without exceptions for rape or incest.”

That language will make the upcoming midterm elections even more critical, she says. “Everybody thinks if they had a different composition of the House or Senate, they might try to do that [federal ban]. Who knows? But nothing in the opinion limits this to states. So, the federal government could issue a nationwide prohibition. We have been seeing the reverberations of this possibility ever since it was leaked. Red states will have a field day and blue states will double down on protections.”

And with abortion rights under fire, McClain says, she would not be surprised if the next target of the Court was contraception, banning things like IUDs (tiny devices that can be inserted into the uterus to prevent pregnancy) or morning-after pills. Even women who suffer miscarriages could find themselves facing suspicion or scrutiny, she says.

Jennifer Childs-Roshak (Questrom’10), president and CEO of the Planned Parenthood League of Massachusetts, issued a statement Friday after the announcement of the Court’s decision. “This dangerous and chilling decision will have devastating consequences across the country, forcing people to travel hundreds, sometimes thousands, of miles for care or remain pregnant,” she wrote. “Abortion is healthcare, and access to care should not be based on one’s zip code, income level, or identity.” She went on to note that the right to abortion is still protected in Massachusetts. “Right now, people can look to Massachusetts for care and for leadership. We must meet this moment with the urgency it demands by taking action to expand access to all sexual and reproductive healthcare—in our clinics providing care to all who want it and by legislating reproductive health equity in every corner of the commonwealth.”

Letter from Robert A. Brown, BU president, to the BU community:

I had hoped that the day would not come when I would write to express my profound disappointment over an action of the Supreme Court of the United States. However, I believe the Court’s official decision today to annul the 1973 decision of Roe v. Wade is an enormous step backward in protecting the rights of all women in our country. This decision denies women the right to make their own decisions about their reproductive health.

• As a provider of health services to our students, we will continue to offer pregnancy options counseling, informed by respect for women’s reproductive choices.

• As an employer of staff and faculty, we will continue to provide health insurance that covers the cost of reproductive healthcare procedures.

• As an educational institution, we will ensure that the future physicians and physician assistants we educate receive the necessary training to provide the full range of reproductive services patients may seek. The Association of American Medical Colleges (AAMC) has reaffirmed its commitment to physician training that supports this position.

• We are also committed to ensuring that our graduates in other health-related fields continue to be trained in reproductive healthcare for women so that they can deliver quality services based on a woman’s right to a full set of options.

Virtually everyone in our country speaks of individual rights as a foundational value of the United States. But, throughout our history, we have struggled to expand rights in accord with our aspirational language. As we continue to address past injustices, we have stumbled backward almost half a century by denying women control over their bodies. We can only hope that our society will find a way to move forward once again and extend this protection to all women in our country.