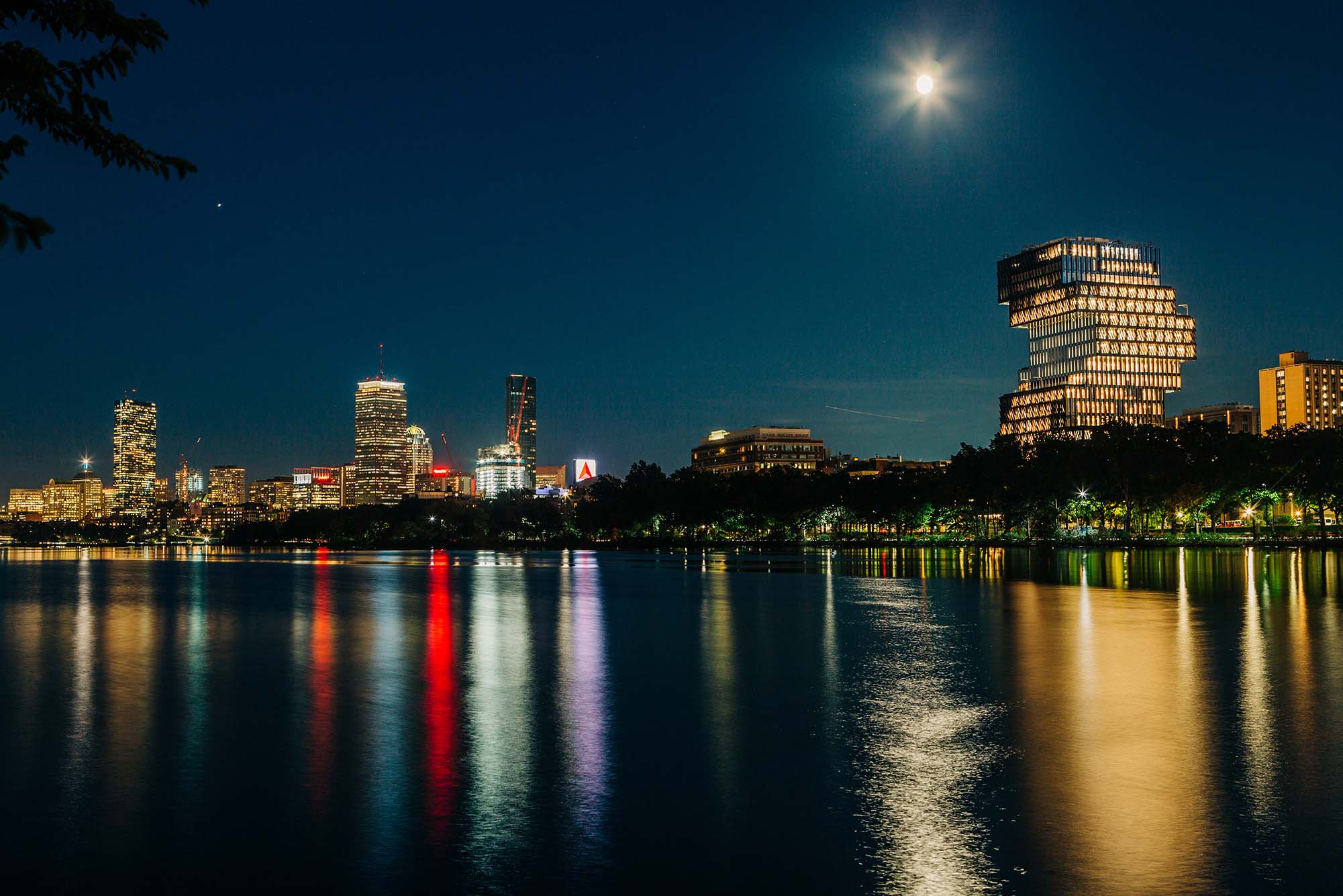 At 305 feet tall and 19 stories, the Center for Computing & Data Sciences will be Boston University’s newest and largest building, and it will also be BU’s most sustainable building, powered by geothermal wells deep beneath the ground.

A New Landmark for Boston University, a Dramatic Addition to Boston’s Skyline

If you look at the most famous city skylines around the world, each one has a building, a tower, a bridge, some structure that stands as its instantly recognizable defining image.

New York City has a few—the Empire State Building and the Freedom Tower top the list. San Francisco has the Golden Gate Bridge. Seattle has its Space Needle, Paris the Eiffel Tower, Sydney has the Sydney Opera House, Toronto the CN Tower, and Rio de Janeiro its Christ the Redeemer statue looking down from atop Corcovado Mountain.

For years, the city’s skyline was defined by either the boring, square-topped Prudential Tower or the more pointed Custom House Clock Tower, until the distinctive, blue-mirrored John Hancock Building emerged in the mid-1970s. Then in 2003, the sleek and modern Leonard P. Zakim Bridge came along, lit up colorfully at night to create the city’s newest postcard image.

Now, after more than 10 years of intense planning and 3 years of construction, a new addition to Boston’s skyline is here, visible from miles away, standing alongside the winding Charles River, as distinctive as any building in the city. (A ceremony on Thursday, December 8, previews the building’s official opening in January 2023.)

At 305 feet tall, Boston University’s 19-story Center for Computing & Data Sciences is not even half the height of Boston’s tallest buildings. But each floor is askew, creating a series of cantilevers that some say make it look like a pile of stacked books or a tower of Jenga blocks about to topple over. And like 200 Clarendon Street (formerly the Hancock Building), its reflective exterior gives off a stunning look at dawn and at dusk, and sometimes in the middle of the day, when, against the backdrop of a perfect blue sky, the building appears to be almost floating.

But as we all know, we’re not supposed to judge a book by its cover.

Even though it may appear to be just another structure of concrete, steel, and glass, this one is different. A system of geothermal wells deep beneath its surface, combined with a sophisticated shading system on its triple-paned windows, will work together to heat the building in the winter and cool it in the summer. No gas, no emissions required—making it the greenest building in BU’s history and one of the most sustainable buildings in New England.

And then there are the people. The most meaningful significance of the Center for Computing & Data Sciences is what will happen inside. We live in a world where our personal data—what we purchase, what we read, what we watch and listen to, what pictures we post, what numbers we text, what vacations we take, what causes we donate to—are more valuable than any tangible possession we might own.

Advertisers want our money. Politicians want our votes. Hackers want our credit cards and bank accounts. Airlines want our vacation plans. Hotels want our reservations. Drug companies want our health records for research. Every single click, post, or purchase we make is one more piece of data out there to be collected, mined, used, or abused.

Inside the Center for Computing & Data Sciences, the future of how our purchases, posts, and clicks can be used—to help better society and to help protect us from being victimized—will be explored by faculty in their research and by students in their studies.

Yes, Boston’s skyline has a distinctive new feature worthy of a postcard picture. But as with any newborn, its inner worth is what will matter the most.

A New Landmark for Boston University, a Dramatic Addition to Boston’s Skyline

Positioned to Lead in a 21st-Century Data-Driven World

There are 5 comments on A New Landmark for Boston University, a Dramatic Addition to Boston’s Skyline

A New Landmark for Boston University, a Dramatic Addition to Boston’s Skyline
5
share this