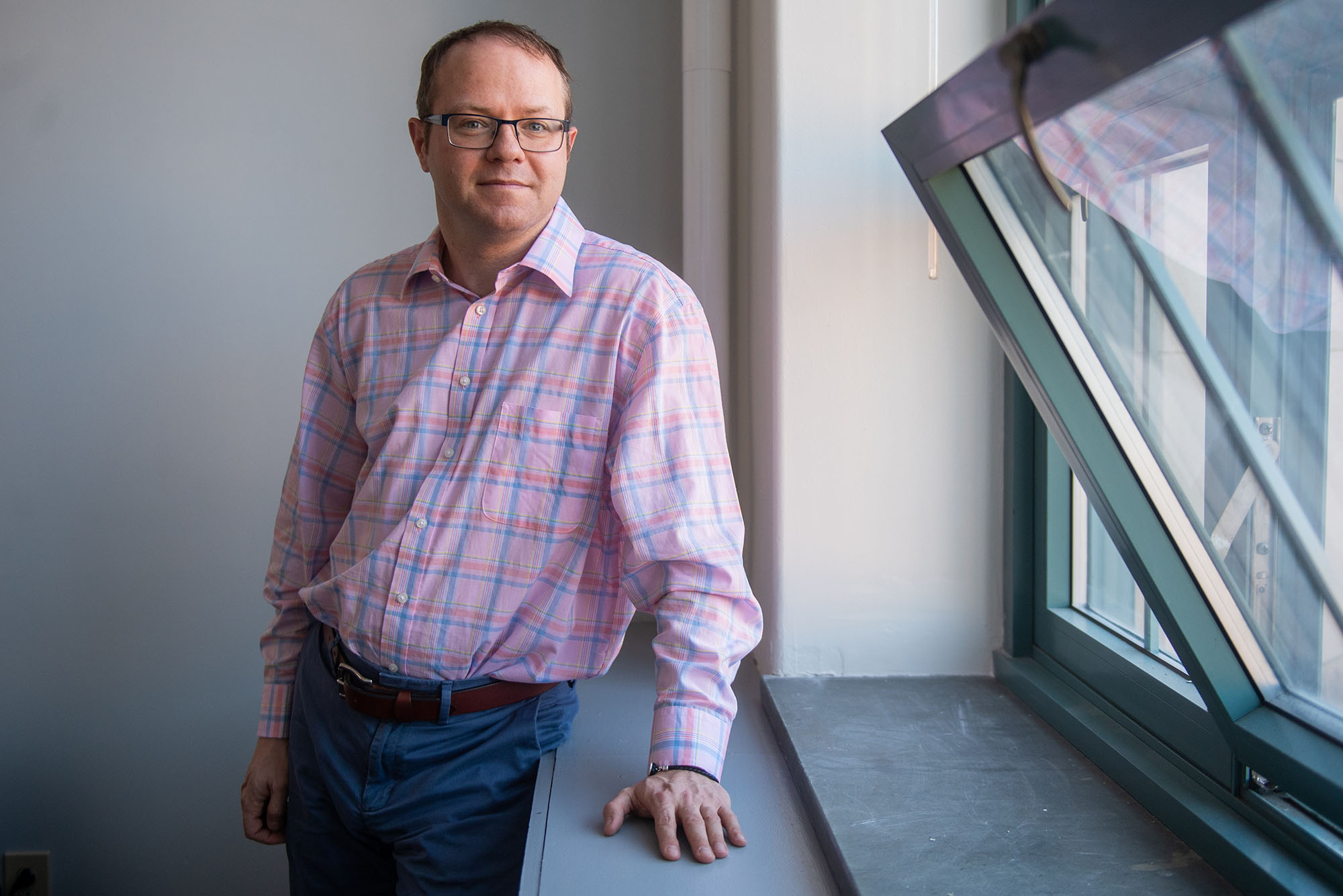 Benjamin Sovacool, director of BU’s Institute for Sustainable Energy, focuses on the human side of going green—how energy and climate policy are systems that are intricately intertwined with our lives. Photo by Cydney Scott

Transitioning the world to sustainable energy without leaving marginalized communities behind is a top priority for new leadership team, including director Benjamin Sovacool

In February, the Intergovernmental Panel on Climate Change (IPCC) released its bleakest forecast of the planet’s health yet: “The rise in weather and climate extremes,” it warned, “has led to some irreversible impacts as natural and human systems are pushed beyond their ability to adapt.” Later this spring, the IPCC will outline the work that needs to happen to avert the worst of the climate disaster. One of those charged with crafting its recommendations is Benjamin Sovacool. A social scientist and internationally renowned climate change expert, Sovacool is the new director of Boston University’s Institute for Sustainable Energy (ISE), a hub for sustainable energy research and policy solutions.

“There’s no shortage of challenges to address,” says Sovacool, who is also a BU College of Arts & Sciences professor of earth and environment.

Given the scale of the solutions needed to address these huge issues, Sovacool is helping the ISE continue its expansion into a University-wide center, welcoming expertise from every sector and school to broaden the focus of sustainability at BU. As well as looking at ways to replace existing fossil fuel infrastructure with low-carbon or zero-carbon alternatives—like wind, solar, and hydroelectricity—Sovacool says one of the biggest challenges is figuring out how to do that in every part of the world in a fair and just way.

“Fifteen years ago, it was rare to see the word ‘justice’ alongside things like ‘electricity’ or ‘electrons,’” says Sovacool, who was previously at the University of Sussex in the United Kingdom, where he was the director of the Sussex Energy Group and the Centre on Innovation and Energy Demand, as well as a professor of energy policy.

“Transitioning to renewable energy is the most significant undertaking in our modern history and we need to do that quickly and sustainably, but also equitably,” says Rebecca Pearl-Martinez, who is joining Sovacool at the ISE as its new executive director. “We have to make sure no one is left behind.”

An expert on bringing women and marginalized communities across the world to the forefront of renewable energy policy, Pearl-Martinez was previously a senior fellow at the ISE and has worked with governments and the United Nations on climate and energy policy in Latin America and the Global South.

Climate and environmental justice efforts—like tackling the preponderance of highly polluting power plants in low-income neighborhoods and communities of color—are increasingly embraced by scientific and environmental communities, Sovacool says, but no one has figured out how to perfectly execute a plan to decarbonize a city or state without some sort of trade-offs or negative consequences. Pearl-Martinez gives an example from research she undertook for the international organization Sustainable Energy for All: an energy company in Kenya may expect to expand energy services by taking payments by phone, but many women who are heads of their households don’t have access to phones and wouldn’t be able to access that service.

“Energy policy and climate technology aren’t just economic systems, they are also systems that can ruin lives, systems that can build wealth, constrain the provision of education, or empower women,” Sovacool says. “There are all sorts of very complex interactions that research wasn’t focused on in the past.”

In the last year alone, Sovacool has published papers about Estonia’s energy transition, a solar micro-grid and low-carbon energy transitions in rural Ghana, equity complications caused by low-carbon technologies—like improved cookstoves and household solar panels—and dozens more studies that look at the social and behavioral aspects of energy policies in different parts of the world.

One of his papers—which recently won an award from the American Association of Geographers—looked at four different pathways to clean energy in vulnerable communities within France, Germany, Ghana, and the Democratic Republic of the Congo. He and his coauthors discovered negative consequences associated with all four scenarios, including worker exploitation and pollution from electronics. However, they also pointed to the urgency for policymakers to reduce injustices from the start by examining the full scope of the process, from workers to consumers, by asking the question, “Sustainable for whom?”

In the Estonia study, for example, Sovacool found the transition to clean energy would cost some people their jobs or spark squabbles over land use. But, “there are also major injustices with doing nothing,” he says, “because if we don’t change, then there are more emissions, oil spills, soil contamination, emissions of particulate matter, and the release of other air pollutants that go over the rest of Eastern Europe. And how is a policymaker supposed to navigate that complexity and uncertainty? That’s the challenge.”

Sovacool and Pearl-Martinez see the ISE, and the whole BU community, as well positioned to provide solutions to these complex issues. As difficult and increasingly urgent as the work of expanding low-carbon technologies might be, the growing adoption of climate justice initiatives around the world gives Sovacool hope.

In the chapter he led for the upcoming IPCC report, he and other researchers focused on the progress in climate action of non-state actors—cities, corporations, and social movements. And in the next 10 years, he says, non-state actors will save more carbon than many nations. There are currently 50 different places in the world, including in the United States, that are taking climate action with justice and equity at the forefront.

That’s reflected in the transformation of the ISE into a hub for scientific research and collaboration across the entire University. He says the ISE is launching a partnership with BU’s Rafik B. Hariri Institute for Computing and Computational Science & Engineering to focus on climate change and misinformation campaigns, and offering graduate student fellowships, starting this summer, for the first time in its history. And there are plans for a new name for the center—Sovacool hopes to crowdsource ideas—all while continuing to submit grant proposals for more projects around justice and equity in energy.

“This is a key moment,” Pearl-Martinez says. “There’s an opportunity to address existing inequality in the rebuilding of our global energy infrastructure. Energy and sustainability are relevant to so many areas of expertise at Boston University, from health to finance to urban environments and beyond. We would like to see the ISE be a global leader in the climate and sustainability space.”

“What really hooked me for this job, apart from the people here, are the core strengths of BU that set us apart from other leading institutions,” Sovacool says. “Tackling big sustainability challenges, including planetary health and problems that are magnified by climate change, is part of the vision.”