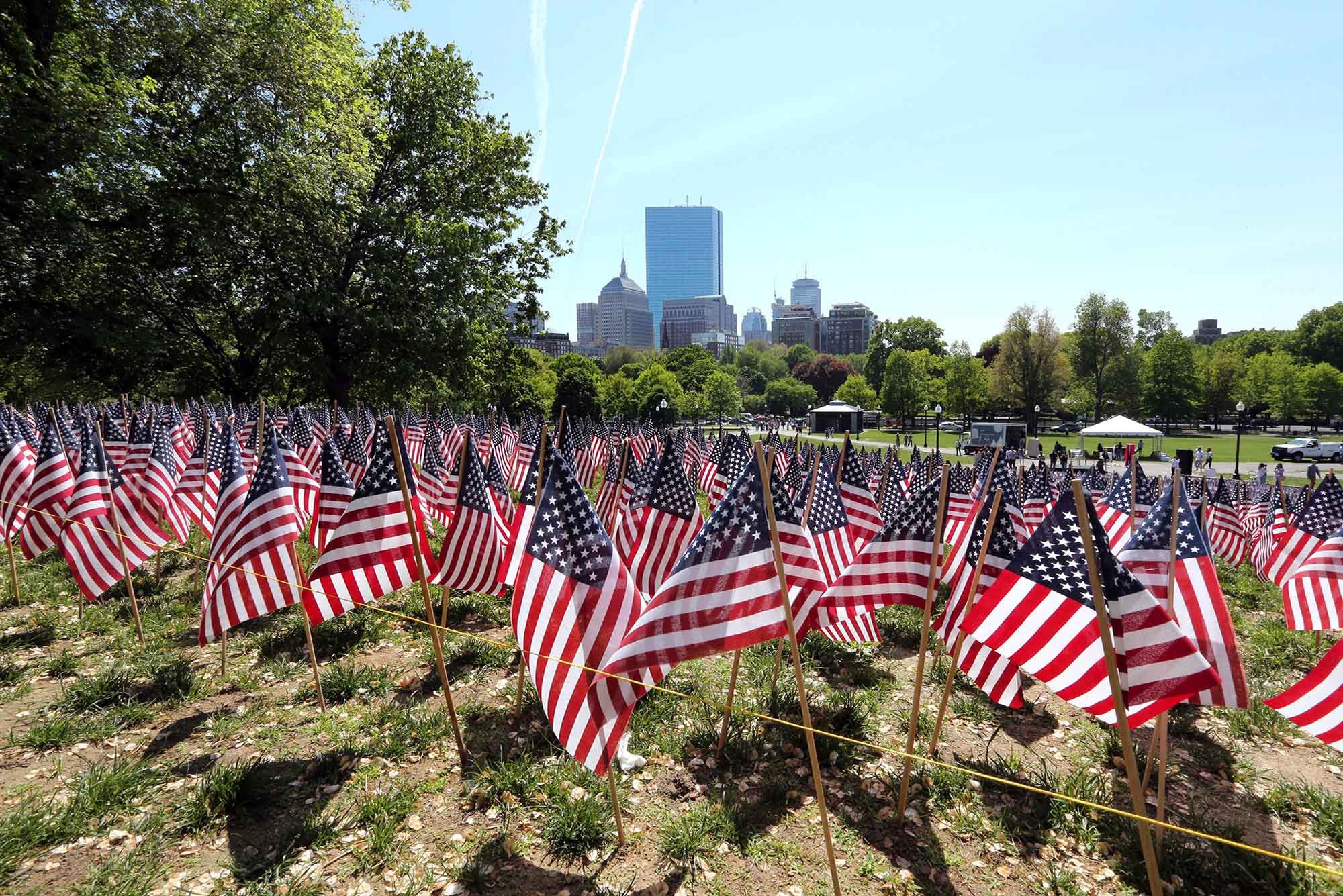 The Boston Common will display its annual Flag Garden for Memorial Day 2022, honoring the 3,700-plus Massachusetts residents who gave their lives for their country. The flags can be seen at the base of the Soldiers and Sailors Monument through Monday, May 30. Photo by Elise Amendola/AP Photo

How to Spend Memorial Day Weekend in Boston

From a flag garden to the Museum of Fine Arts to Boston Calling, there’s no shortage of activities here in the city

Memorial Day weekend is bittersweet. It’s a time to remember those in the US Armed Forces who lost their lives in the line of duty, and it also marks the unofficial start of summer, with hoped-for balmy weather and planned barbecues. In the spirit of balance, the Greater Boston area will host an array of events and activities that both honor sacrifice and celebrate life. From a three-day music festival to a commemorative flag garden to home games at Fenway and Gillette, there’s ample opportunity to relax, reflect, and rejoice.

Stop by the annual Memorial Day Flag Garden at the Boston Common this weekend to honor the 37,000-plus Massachusetts veterans who died while serving their country. The base of the Soldiers and Sailors Monument is transformed into a sea of red, white, and blue each Memorial Day, thanks to volunteers from the Massachusetts Military Heroes Fund, who plant a flag for all veterans who lost their life, dating back to the Revolutionary War.

The Memorial Day Flag Garden, atop the Boston Common’s Flagstaff Hill, is on display through Memorial Day, Monday, May 30. Take any MBTA Green Line trolley to Arlington, Boylston, or Park Streets.

The USS Constitution Museum aims to engage visitors in the story of “Old Ironsides” and teach about maritime heritage, naval service, and the American experience. It also commemorates America’s soldiers—past and present—with year-round programming. In keeping with tradition, the museum invites visitors to construct a paper poppy in remembrance of a deceased service member and add it to the site’s memorial garden. On May 30, make sure to catch the USS Constitution’s Memorial Day service just across the pier. (Note: the museum and ship operate separately and have different hours.) At noon, a 21-gun salute will take place aboard the USS Constitution—the oldest commissioned warship in the world—in addition to a presentation honoring Gold Star families.

The USS Constitution is inside Boston National Historical Park, and is open Tuesday to Sunday, 10 am to 6 pm, closed most Mondays, but is open Memorial Day. Admission to the ship is free for all visitors, first come, first served. Visitors 18 and over must provide a valid state or federal-issued ID or passport. Take an MBTA Green Line trolley to North Station and walk over the Charlestown Bridge, following signs for the Freedom Trail.

This year, Cambridge will forgo its annual parade, opting instead for a program of events, including flag decoration, a Naval water ceremony, and a Ukrainian choir. The events, organized by the city’s Department of Veterans’ Services, begins with flag decoration at the Cambridge Cemetery followed by an observance at the Civil War Monument, where Mayor Sumbul Siddiqui and city manager Louis A. DePasquale will speak. Later in the day, the public is invited to the John W. Weeks Footbridge to cast flowers into the Charles River in honor of those who lost their lives while serving in the Navy. On Monday, on the Cambridge Common, there will be keynote addresses, marching regiments, and performances by the Refugee Orchestra Project and a Ukrainian choir.

Flag decoration will be at the Cambridge Cemetery, 89 Coolidge Ave., Cambridge, from 9 to 10 am on Saturday, May 28. An observance follows at 10 am at the Civil War Monument on Bonny Path, followed by refreshments. The Naval water ceremony is at noon on the John W. Weeks Footbridge, 953 Memorial Dr., Cambridge. Keynote addresses and performances will be held on Monday, May 30, at 10:30 am, on the Cambridge Common, Warehouse Street and Massachusetts Avenue, in Harvard Square. Family entertainment follows at the Alexander W. Kemp Playground, near Waterhouse Street. Food trucks on the Cambridge Common (Garden Street side) will offer free food to veterans, on a first come, first served basis, beginning at 11 am. Take an MBTA Red Line train to Harvard Square.

Boston’s flagship music event returns triumphantly after a two-year hiatus caused by the COVID-19 pandemic. This year, the three-day festival, held at the Harvard University Athletics Complex, will see some of its biggest headliners yet with Nine Inch Nails, The Strokes, and Metallica. Don’t miss chart-toppers like Weezer, Haim, Avril Lavigne, Run the Jewels, and Cheap Trick, in addition to local favorites Oompa and Cliff Notez. Find a complete lineup here. Second only to the music is this year’s roster of food trucks, including Roxy’s Gourmet Grilled Cheese, Tasty Burger, FoMu vegan ice cream, and much more.

Memorial Day Open House at the Museum of Fine Arts

To commemorate Memorial Day, the Museum of Fine Arts offers its annual free admission on Monday with special access to the MFA’s current exhibition, Turner’s Modern World, exploring the oil and watercolor works of Industrial Revolution–era artist J.M.W. Turner. In addition, the museum will host a drop-in papermaking class where guests can learn how to make “new, handmade sheets embedded with native, pollinator-friendly, and pesticide-free wildflower and meadow seeds.”

Free Admission at the Institute of Contemporary Art

Another one of Boston’s premier museums, the Institute of Contemporary Art, is also offering free admission on Memorial Day. Guests can view the ICA’s permanent collection, as well as several temporary exhibitions, such as Napoleon Jones-Henderson’s candy-colored tributes to his Black heritage, the Mexican craftwork-inspired sculptures of Raúl de Nieves, and a collection of photographs from Ukraine in the third-floor lobby. In addition, the ICA Watershed will present its newly opened exhibition Revival: Materials and Monumental Forms, at no charge to the public.

The Institute of Contemporary Art’s Memorial Day Open House is Monday, May 30, from 10 am to 5 pm, 100 Northern Ave., Boston. Find directions here.

Root for the Home Team

Soccer fans, here’s a chance to cheer on the local team. Head down to Gillette Stadium and watch Boston’s Major League Soccer team, the New England Revolution, take on the Philadelphia Union at 7:30 pm on Saturday. Make a day of it by exploring Patriot Place (adjacent to the stadium), which, in addition to housing the New England Patriots Hall of Fame, also includes 1.3 million square feet of restaurants, stores, and other attractions.

The New England Revolution hosts the Philadelphia Union at Gillette Stadium, One Patriot Place, Foxborough, at 7:30 pm on Saturday, May 28. Purchase tickets online. Take any MBTA Green Line trolley to Copley Station, and walk five minutes on Dartmouth Street to Back Bay Station to hop on the commuter rail. Round-trip tickets to Gillette Stadium are $20 and can be purchased online or from the ticket offices at South Station, North Station, or Back Bay. Take the Franklin Line commuter rail train from Back Bay to Norfolk Station. Finally, take the Tri-Town Connector bus from Norfolk to Patriot Place.

After a rough start to the season, things have been looking up for the Red Sox—though the same can’t exactly be said for their Baltimore counterpart. Catch some gorgeous weather at America’s oldest MLB park during the last of five consecutive home games against the Os before the Cincinnati Reds come to town on Tuesday.

How to Spend Memorial Day Weekend in Boston

How to Spend Memorial Day Weekend in Boston
0
share this