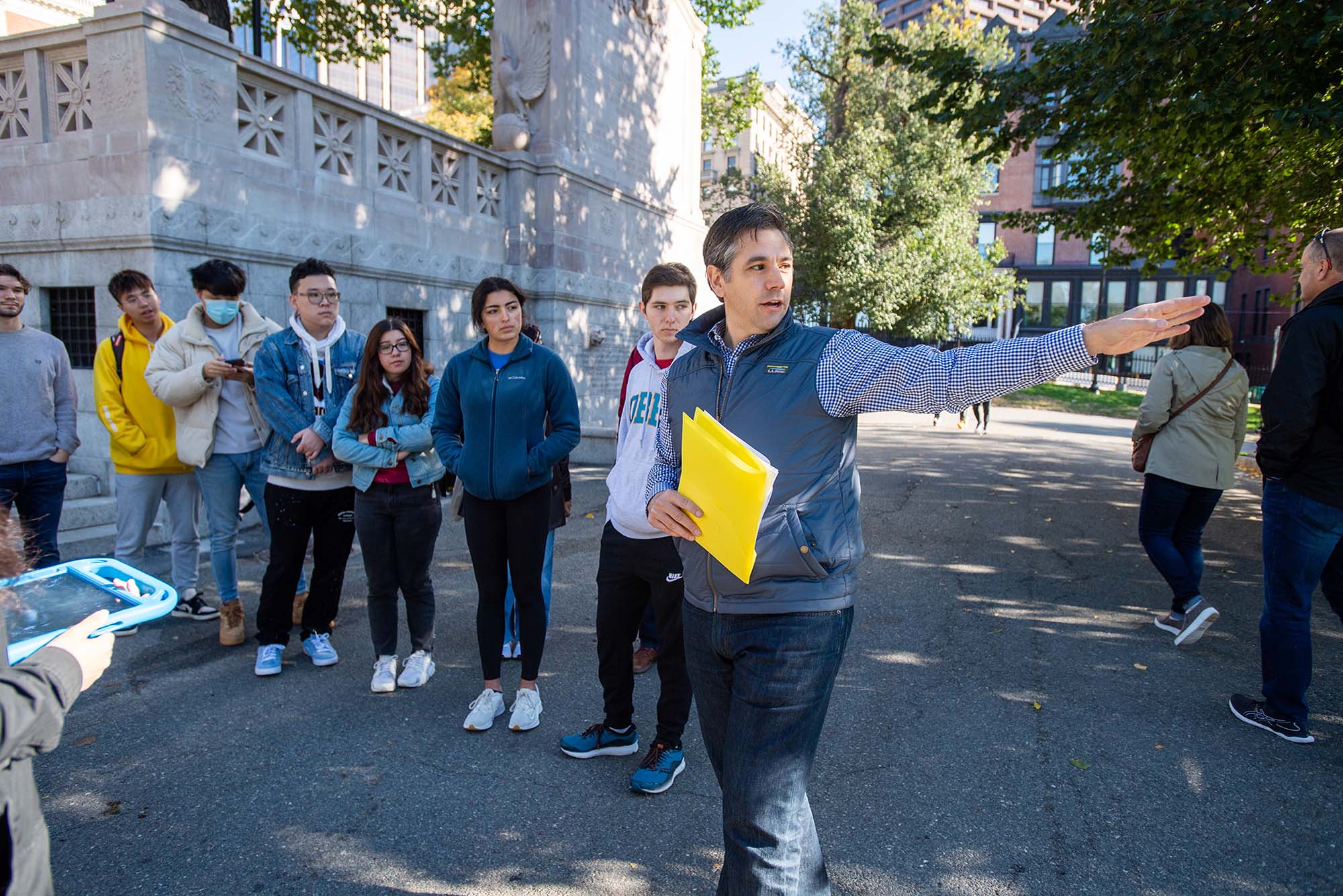 Starting near the Robert Gould Shaw and the 54th Regiment Memorial, Professor Andrew Robichaud leads his History of Boston: Community and Conflict students on a tour of downtown Boston’s environmental history on October 20.

History of Boston: Community and Conflict takes students on the wild 400-year journey of the City upon a Hill

It’s the City upon a Hill. Hub of the Universe. The Athens of America. Oscar Wilde spoke of its “permanent intellectual tradition,” while E. B. White said it evokes “an authenticity and piety which few other American cities possess.”

This, historically speaking, is Boston: blessed by tradition, a Puritan ethos, and the pursuit of progress.

It’s a narrative that Bostonians cherish, reinforced by centuries of reformers and academics and decades of Kennedys—but it’s also a narrative worthy of a fresh look, according to Andrew Robichaud, a College of Arts & Sciences assistant professor of history. Robichaud’s CAS course, History of Boston: Community and Conflict, seeks to reconcile the celebrated aspects of the city’s history—Puritans, pilgrims, and all—and the parts that are forgotten.

“In the consensus period of history you see this idea of Boston as the spirit of America, with the Puritans, the pilgrims, and Thanksgiving—but there’s a mythology to that, too,” he says. “The ‘City upon a Hill’ is a powerful mythology.”

Developed in 2012 by James H. Johnson, CAS history department chair, and Bruce Schulman, the William E. Huntington Professor of History, the 10-year-old course is designed to give students a better understanding of the city they inhabit, beginning, the description says, with “Native American cultures and the very earliest phases of European contact and [ending] with the development of the Seaport.” Robichaud began teaching the class after arriving at BU in 2015; since then, the fall course has grown popular enough to warrant the creation of a spring section.

The ‘City upon a Hill’ is a powerful mythology.

“One of the things I love about this course is that while Boston is obviously specific and unique, it’s one of the few cities that you can really effectively tell a longer version of American history,” he says.

With a 392-year-old city, there’s no shortage of historical ground to cover. But Robichaud says the course focuses on community and conflict, because those two themes recur all the way from the American Revolution to the 1970s busing crisis.

“One thing that I tried to emphasize is, how do we think about community historically and its relationship to inclusion or exclusion?” he says. “The Puritans in Boston and the surrounding areas were obsessed with their communities, their churches, but with that comes the exclusion of Native Americans, Quakers, and anything or anybody they deemed to be heretical.”

Robichaud says the vast majority of his students are not from Boston, and that’s why certain elements of the course structure are meant to give them a closer relationship to the city. Each semester, students go on two themed walking tours of the downtown area; this year’s themes are Black history and environmental history, both following a snaking route around the Boston Common. Students are also tasked with giving a presentation on a local landmark of their choice—but they must visit the site in person.

Kiran Gomatam (ENG’23) is from California and chose the Kelleher Rose Garden in the Back Bay Fens as her landmark. “I’ve been there before and I thought it was really cool, so I wanted to know more about the history of the place,” she says. “It’s super interesting that [in this course] you can learn about things in class and then actually come out into the city and see the physical space.”

Her classmate Kaylee Chin (COM’23) agrees. “I’ve been around these places a bunch of times,” she says, “but I didn’t know the exact history. This course is fun to take in senior year because I’m about to leave, so now I’m appreciating the city in a different way.”

Students didn’t just get closer to historic sites. They also looked at historic documents. The class was developed in collaboration with the Massachusetts Historical Society (MHS), and much of the assigned coursework revolves around the primary source documents in its collection.

“We want students to know about the Massachusetts Historical Society, particularly if they’re going to be history majors,” Robichaud explains. “I think a big part of the course is trying to demystify that whole process; it’s an extra couple of steps more than just going to the internet and searching on Google Books.”

Chin recalled one class trip to the MHS where students could don special gloves and “actually touch and hold documents that were physically here in the 1700s and 1800s.”

Reproductions of MHS materials also appeared frequently in class, sketching moments from the American history canon in finer detail. In one class, Robichaud passed around a handwritten account of Paul Revere’s famous ride—penned by Revere himself—for students to analyze. In it, he describes his apprehension by British soldiers, the questions they asked him, the directions they pointed their muskets in. The only problem? Revere’s handwriting, a haphazard cursive script, had to be decoded first.

“We looked at documents like this when we went to the MHS, but none of them were as bad as this,” laments Hashir Siddiq (Sargent’23, CAS’23).

The course culminates in small-group presentations on a topic in Boston history. Each group examines a primary source from the MHS collection and must produce a 10-page paper on its relevance. Past topics have been expansive: “Catastrophe, Recovery, and Memory,” “Slavery and Freedom in the Cradle of Liberty,” “Immigration and Migration in Boston.” This semester’s topic focuses solely on the Boston Massacre.

“We’re looking at multiple perspectives on the event,” Robichaud says, including primary source recollections similar to Revere’s. “Memory is always a big part of the course. How does history enter into public memory, either through scholarly history, open commemoration, or through mythologies?”

While students work on their presentations, class lectures progress from the 18th to the 19th centuries, through the Progressive Era, World Wars I and II, the Civil Rights Movement, and finally, urban renewal and the “new” Boston.

“Throughout the class, there’s an emphasis on how much everything has changed,” Gomatam says. “Because we’re covering so many years, we’ve been focusing on how everything has evolved from ‘then’ to ‘now.’ It’s a lot of information.”

Change, says Robichaud, is perhaps the most overlooked fundament of Boston history. Can the City upon a Hill, so rooted in bygone centuries, still be evolving?

“Boston history is just a constant remaking of the demographic and social environment over and over again—there’s no stasis to it,” he says. “Many people still do have a view of the city as unchanging, but even the things that we think of as unchanging have changed.””