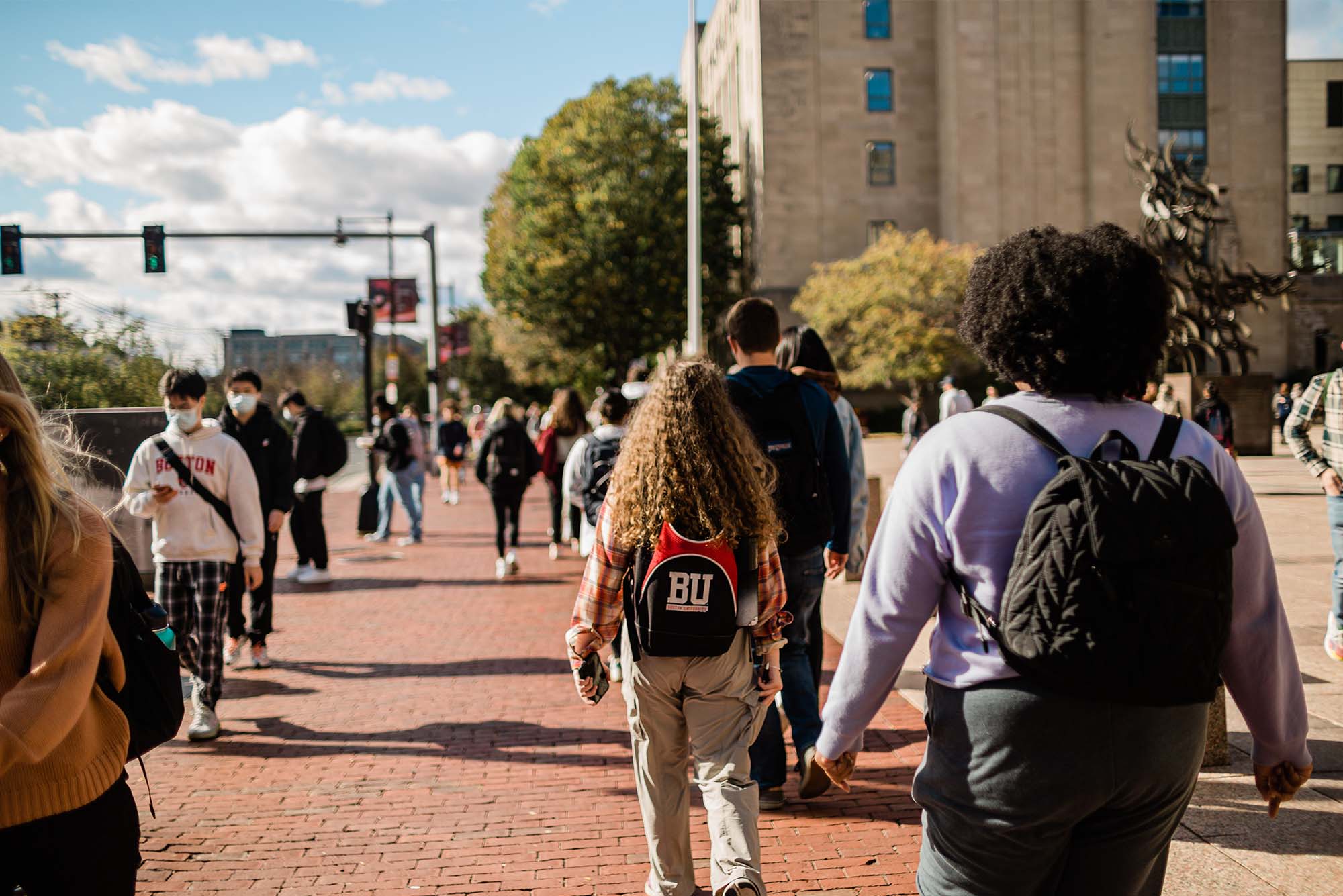 For the first time in two years, Admissions is holding in-person open houses for admitted students, which began March 28 and continue throughout April on Fridays and Saturdays. Photo by Janice Checchio

Here’s Who BU Invited to Join the Class of 2026

With 80,794 students applying for 3,100 openings, the University’s acceptance rate was 14 percent

Among those invited to join BU’s Class of 2026 are a student who developed an app to detect Parkinson’s disease in facial photographs, another who interned on the upcoming Star Wars installment Rogue Squadron, and a third who launched a peer tutoring program to combat a school’s dropout rate.

Kelly Walter (Wheelock’81), dean of admissions and associate vice president for enrollment, says this year’s admittance rate was four points lower than the Class of 2025, and it reflects the ever-increasing competition for admission to BU. “The academic strength and diversity of the applicant pool positioned us to admit the strongest class in BU’s history,” Walter says.

And that’s saying something. Over the past decade, BU’s admittance rate has dropped from 46 percent in 2012 to 14 percent in this year’s admissions season.

The students accepted to the Class of 2026 come from the top 6 percent of their high school class, with a 3.95 grade point average and an SAT of 1491 and an ACT of 34. But it’s worth noting that only 54 percent of applicants submitted their standardized test scores, since BU joined many schools in making the SAT and ACT standardized-test-optional again this year. Admissions officials believe this accounts for why colleges across the country are seeing record-breaking numbers of applications—BU received 6.7 percent more applicants this year than last year.

Aside from applicants wanting to attend BU because of its location (Boston is one of the biggest college towns in the country, after all), students’ top reason for applying to the University is “our strong reputation for academic excellence and a rigorous academic curriculum,” Walter says, citing diverse opportunities outside the classroom, like internships, BU Study Abroad, and the Undergraduate Research Opportunities Program (UROP). The next reason they cited is BU’s excellent ranking in national surveys. Walter says students also seek out BU for its “high job placement rates and strong relationships with employers, as well as our commitment to equity, diversity, and inclusion as important factors in their college choice.”

High school senior Tuva Kateraas, who was among the 50 percent of the class who was accepted via early decision, cites the reasons above for why she chose to attend BU. But an in-person visit during last fall’s (delayed) 2020 Commencement ceremony on Nickerson Field confirmed her choice. “Having that gut feeling of knowing that BU was the right place for me when I walked on campus—so cliché, I know—and imagining myself in that red cap and gown, following the paths of those students next year, was so thrilling,” she says. “Ultimately, I applied to BU early decision because I knew that even if I got into any of the other schools I applied to, I would still choose BU.”

This year’s accepted students come from all over the country and the globe: 24 percent are international students, hailing from 87 countries; domestically, students come from all 50 states plus Washington, D.C., Puerto Rico, Guam, and the US Virgin Islands. Walter says that 21 percent of the students admitted are from underrepresented groups, and approximately 13 percent are first-generation college students.

It’s the first time since 2019 that Admissions is holding in-person admitted students open houses, which started March 28 and continue on Fridays and Saturdays throughout April. There will also be more than 80 virtual programs for students, including tours of student dorm rooms, school and college presentations with live chats, mini lectures, meetings with academic advisors, and more. New this year is the series “Student Voices,” which are hangouts hosted by student clubs on campus, like the BU Zen Community, the Queer Activist Collective, the Trans Listening Circle, the Asian Student Union, and the Community Service Center. Admissions reps will also host “meet and greets” around the world in far-flung places like Bangkok, Thailand, Turkey, Dubai, London, Singapore, and Toronto.

Students have until May 1 to notify BU that they will attend.

Here’s Who BU Invited to Join the Class of 2026