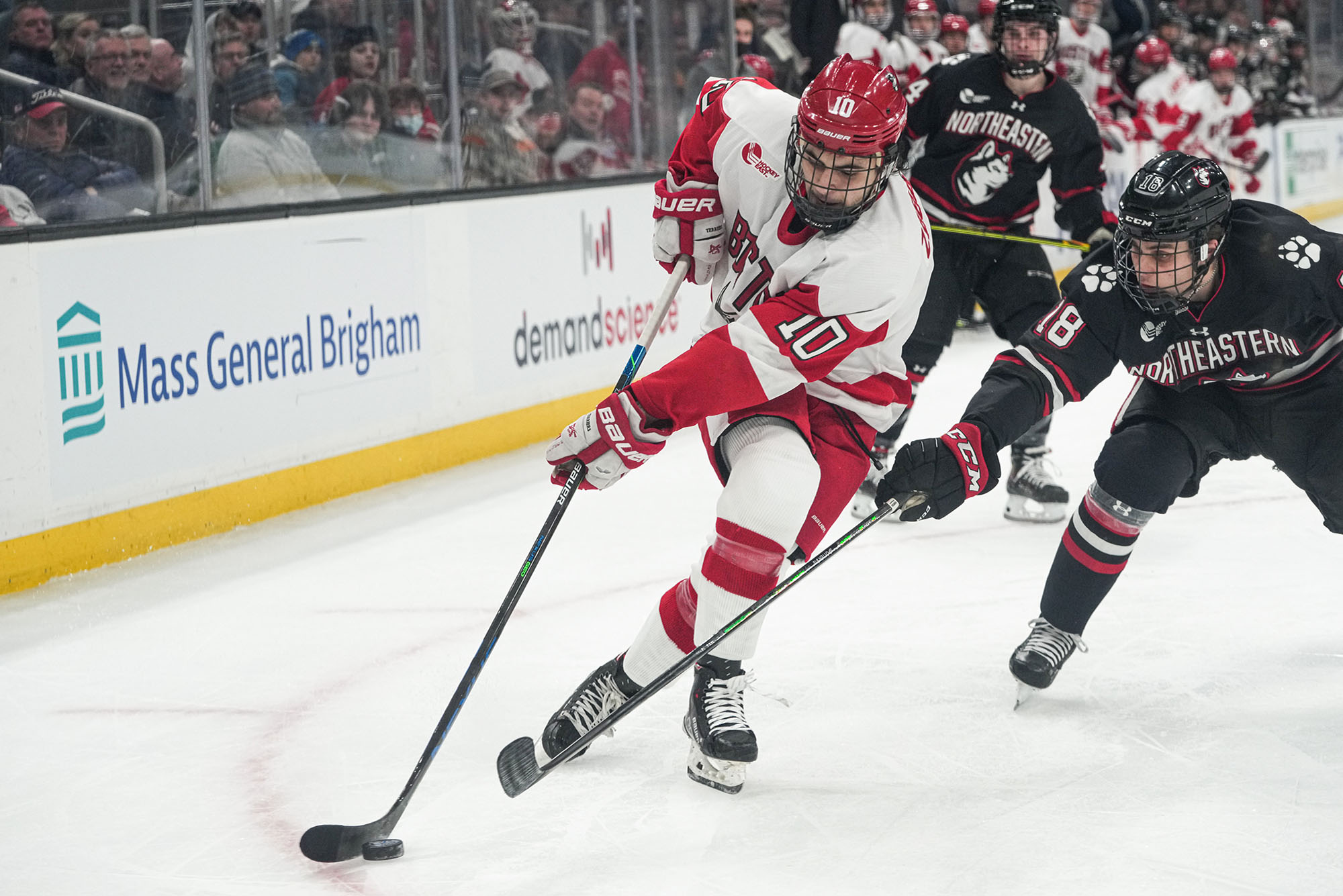 For the first time since 2015, the men’s Beanpot is back on Comm Ave.

No. 17 Boston University fought No. 13 Northeastern to a stalemate for 57 minutes on Monday night at TD Garden, but with overtime looming, Dylan Peterson (COM’24) scored the only goal in BU’s 1-0 win, earning the Terriers their 31st Beanpot title.

After the Beanpot was canceled in 2021 because of the COVID-19 pandemic, the first year with no tournament since it began in 1952, the fans were determined to bring a little extra energy to the championship game. The Garden was rocking from the first puck drop, as cheers by Huskies fans and the BU Dog Pound were traded back and forth until the final seconds, when Northeastern pulled its goalie in a frantic push to score the tying goal.

But it wasn’t to be, and BU players rushed onto the ice when the final horn sounded.

On the Terrier bench, Albie O’Connell (CAS’99) had been waiting four years to lift the trophy as the head coach of his alma mater, where he won four consecutive Beanpot titles as a player, from 1996 to 1999.

After injury caused him to miss playing time throughout BU’s current seven-game win streak, Peterson made up for it in the Beanpot final. Victorious goaltender Vinny Duplessis (Questrom’24) was an equally unlikely hero, shutting out the Huskies with 19 saves in just his sixth start of the season. He was in net in place of Drew Commesso (CAS’24), who is in Beijing, China, representing the United States as the starting goalie for the men’s Olympic hockey team.

The first period came and went without a goal despite several near-misses on both sides. Northeastern’s Tyler Spott had the best chance of the frame seven minutes in, staring down a gaping net from close range before Jay O’Brien (COM’23) intervened with a critical block on the edge of the Terrier crease.

BU also got an early defensive contribution from John Copeland (SHA’23), who was activated just moments before puck drop in place of assistant captain Alex Vlasic (COM’23), who was ruled out, a victim of food poisoning. With three Huskies closing in on the lone Terrier defenseman, Copeland deflected a pass out of play to prevent a shot on the break.

The Terriers threatened as well, compiling 11 shots on goal to 4 for the Huskies. BU came closest halfway through the frame when Ty Gallagher (CAS’25) swung a shot from between the circles that skimmed the top of the Northeastern crossbar.

The teams traded punches on odd-man opportunities and in four-on-four action following the game’s first penalties late in the opening period. But neither offense could break through, remaining deadlocked after 20 minutes.

“The game was up and down, with momentum going back and forth between the teams,” Peterson said. “I think we managed it really well.”

The defensive chess match continued into the second period, which again ended scoreless. Both goaltenders made important stops in the first minutes of the frame as Duplessis held strong against a solo net drive by Ty Jackson, and less than a minute later Northeastern goalie TJ Semptimphelter flashed the pad to deny a shot from Joseph Campolieto (CAS’22) that took a hard redirection in front.

It looked like Semptimphelter was beat when Luke Tuch (COM’24) circled the net for a wrap-around bid in the middle stages of the second period, but Alex Mella met Tuch at the post and denied the chance.

The Terriers had another great try 30 seconds before the buzzer when Jay O’Brien (COM’23) found Matt Brown (Questrom’23) with a lane to the net, but Brown couldn’t quite pull the puck inside the post and the period ended deadlocked. BU’s lead in shots on goal stayed intact, 18-9 after 40 minutes.

Overtime looked inevitable for much of the third period as both netminders stood tall into the late moments. Brown and Robert Mastrosimone (SHA’23) threatened seconds apart in the final five minutes, but it was the Terrier fourth line that produced when it mattered most.

With three minutes remaining in regulation, Jamie Armstrong (CAS’23) flew into the offensive zone, driving the puck along the left wing. At the last moment, Armstrong slid it centrally to Peterson, who provided the game-deciding shot into the Northeastern goal.

“I didn’t know [Armstrong] had that patience in him,” Peterson said of his linemate’s assist. “He made an incredible play, and I put it in the back of the net.”

BU withstood Northeastern’s pressure for the final 2:56 of the game, taking the victory, 1-0. Duplessis made 19 saves to earn the shutout on the biggest stage of his college career.

“For the players, it’s great excitement—the opportunity to play in the game, and to play the way they did,” O’Connell said. “They really performed. I thought the guys did a really good job of playing a championship-type game.”

The women’s team was the last BU hockey team to bring a Beanpot trophy back to Comm Ave in 2019. The men’s team now has 12 wins in their last 14 games, which is why Peterson was confident heading into Monday’s game. “We just have confidence in each other,” Peterson said. “We believe in each other, and we know we’re capable of doing our jobs correctly.”

BU will next compete for a trophy in the Hockey East Tournament, which begins on Wednesday, March 9, and concludes with the championship game at TD Garden on Saturday, March 19. And should BU qualify, it’s on to the national tournament, which will commence on Friday, March 25.

There are 5 comments on BU Claims Its 31st Beanpot Championship, Beating Northeastern 1-0