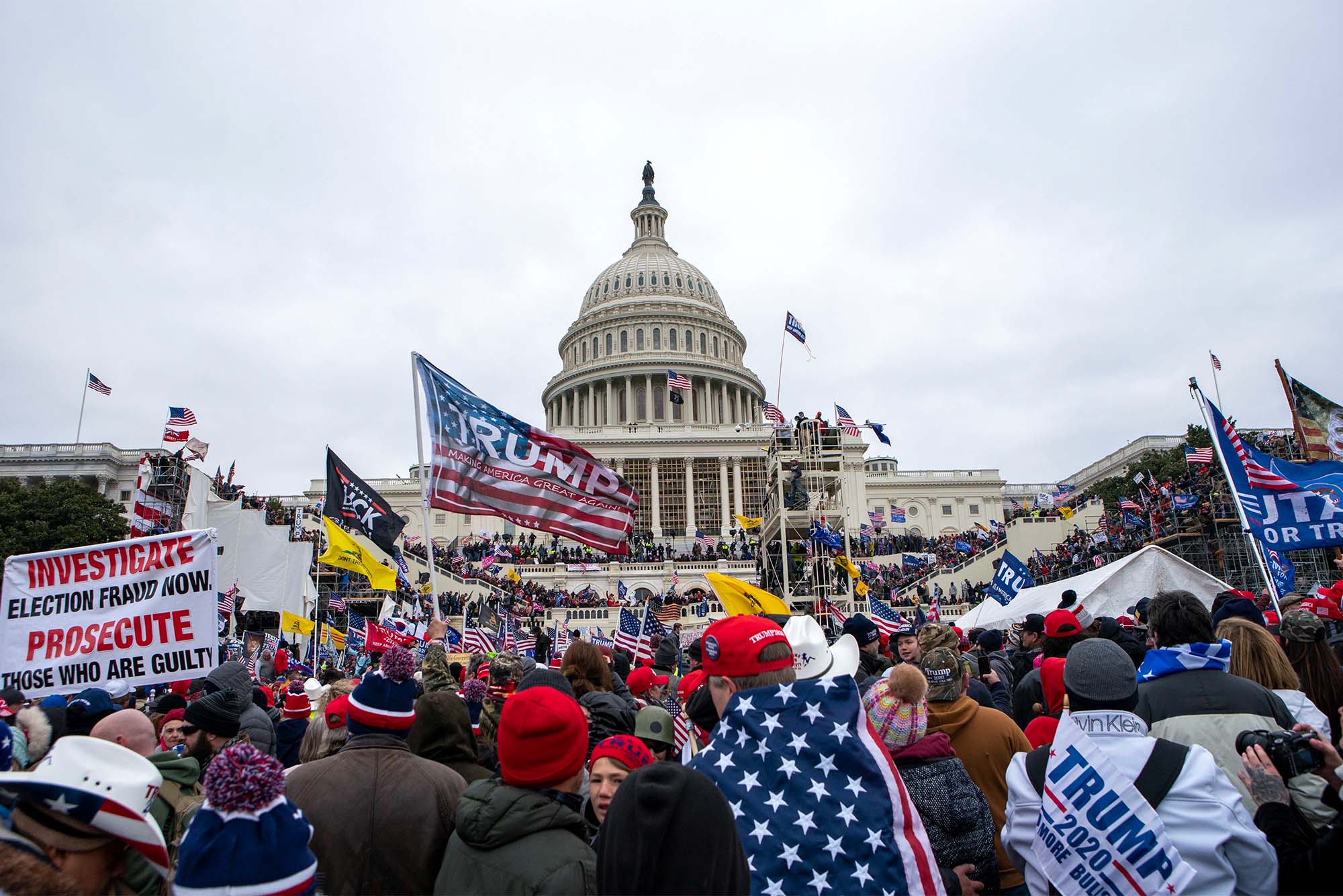 No, says BU historian Jonathan Zatlin, but they can still be dangerous

“To call a person who endorses violence against the duly elected government a ‘Republican’ is itself Orwellian. More accurate words exist for such a person. One of them is ‘fascist.’”

Washington Post columnist Dana Milbank dropped the f-word after the Republican National Committee (RNC) on February 4 declared the January 6, 2021, insurrection at the US Capitol “legitimate political discourse.” The RNC also censured US Representatives Liz Cheney (R-Wyo.) and Adam Kinzinger (R-Ill.) for serving on the House committee investigating the Capitol attack.

Others—former George W. Bush speechwriter David Frum and Democratic journalist Ed Kilgore among them—agree that the Trump-appeasing GOP is akin to the European fascists who rose to power between the two world wars. The concern predates the RNC’s endorsement of violence. Frum noted the insurrection itself, while Kilgore detected such parallels to interwar fascism as a “foundational” lie (Nazi claims about German sellouts after World War I, Trump supporters’ claims about election theft) and alliances with “reactionary religious interests and radical elements among the police and military veterans.”

This semester, Jonathan Zatlin, a College of Arts & Sciences associate professor of history, is teaching Comparative European Fascism, about Hitler’s Germany, Mussolini’s Italy, and similar regimes that trafficked in violence, racism, and repression. He says critics of Trumpers fling “fascist” facilely and without historical reference. But that doesn’t mean there’s no danger from violent Trumpers, he adds, as well as from Republicans like Mitch McConnell (R-Ky.), the Senate GOP leader, who thought they could restrain Trump. McConnell, for the record, publicly criticized the RNC earlier this week for censuring Cheney and Kinzinger and for normalizing the Capitol attack. He said it was “a violent insurrection for the purpose of trying to prevent a peaceful transfer of power after a legitimately certified election from one administration to the next.”

BU Today asked Zatlin his thoughts on analogizing MAGA to Hitler and Mussolini.

BU Today: Could the Republican Party be described as either fascist or fascist-leaning?

Jonathan Zatlin: From the historian’s perspective, fascism was a response to problems after 1918—the collapse of multiethnic empires, economic crises—that we don’t have today. If we’re experiencing crises, they’re crises that only superficially resemble what was going on in the interwar period: high inflation, the pandemic [of] the Spanish flu. What we’ve been experiencing the last couple of years are just very different situations. And we don’t have a four-year-long war that killed millions and traumatized a whole generation of young people who found it hard to be integrated back into society and work 9-to-5 jobs, then later experienced mass employment and a Depression lasting years. That, plus weak democratic traditions, led many Europeans to conclude that democracy brought crisis and poverty, and that only authoritarian regimes could ensure prosperity and stability.

Fascism was a response to long-term trends and what was going on after 1918. What you see today, what Tucker Carlson and Marjorie Taylor Greene are saying, is completely unoriginal. It is an attempt to resurrect those responses in the interwar period to democratic and liberal rule. It’s not clear to me that you can call them fascists, since fascism was a historical phenomenon. Simply because you think violence is good, and you think racism is good, doesn’t make you a fascist.

There’s a libertarian strand of American politics, going back to 1776, that is used to interpret January 6 as a moment of positive antiauthoritarianism. If you think about Rosa Parks defying bad law, there’s nothing violent about that. Almost all January 6 insurrectionists—I wouldn’t call [them] fascists, because fascists are people who were involved in the interwar period. But there’s no question that they’re violent antidemocrats who are also violently racist. And the Republican Party is in danger of becoming the party of violence, antidemocracy, and racism. If there is any kind of similarity with the interwar period, it’s that you have conservatives willing to collaborate for political reasons with people who are often violent and racist and antidemocratic.

BU Today: Some observers argue that local Republican officials and Republican judges thwarted Trump’s attempt to overturn the 2020 election, so we aren’t headed for autocracy. Any validity to that argument?

Jonathan Zatlin: If you look at the interwar period, there’s no question that the civil service—especially in Germany, where democracy was linked to economic crises and the defeat of the [First World] War—was opposed to democracy. And that’s simply not the case in the United States. I don’t think that has anything to do with Republicans, actually; I think it’s that we’ve all been taught that democracy is a really important value.

That said, the last president did try—and it seems Republican parties locally as well as on the state level are trying—to put public officials into office who don’t have democracy as a value, who believe violence is a legitimate part of public discourse, which it obviously isn’t. It’s a form of politics that is deeply disturbing, because it means the Republican Party has allied itself with antidemocratic values, violence, and racism.

BU Today: Is there any fascist analog on the American left?

BU Today: Whatever you call today’s violent, racist, antidemocratic forces in the United States, are there lessons history offers for thwarting them?

Jonathan Zatlin: You don’t make compromises with them. You have to call these things out. It’s important to call conspiracy theories out and debunk them. It’s a difficult thing to do, but all these things need to be called out. You cannot make alliances with people like this, because these ideas are so corrosive. [They] will swallow you whole. You cannot make idiotic statements like violence is part of democratic discourse.

Conservatives believed they could contain fascists in the interwar period, and seem to think the same thing today. They bear responsibility not only for generating some of the ideas, but for collaborating with, and tolerating, a lot of the violence and racism. I see conservatives walking down a really precarious path, one that will endanger us all.

There are 71 comments on Are Trump Republicans Fascists?