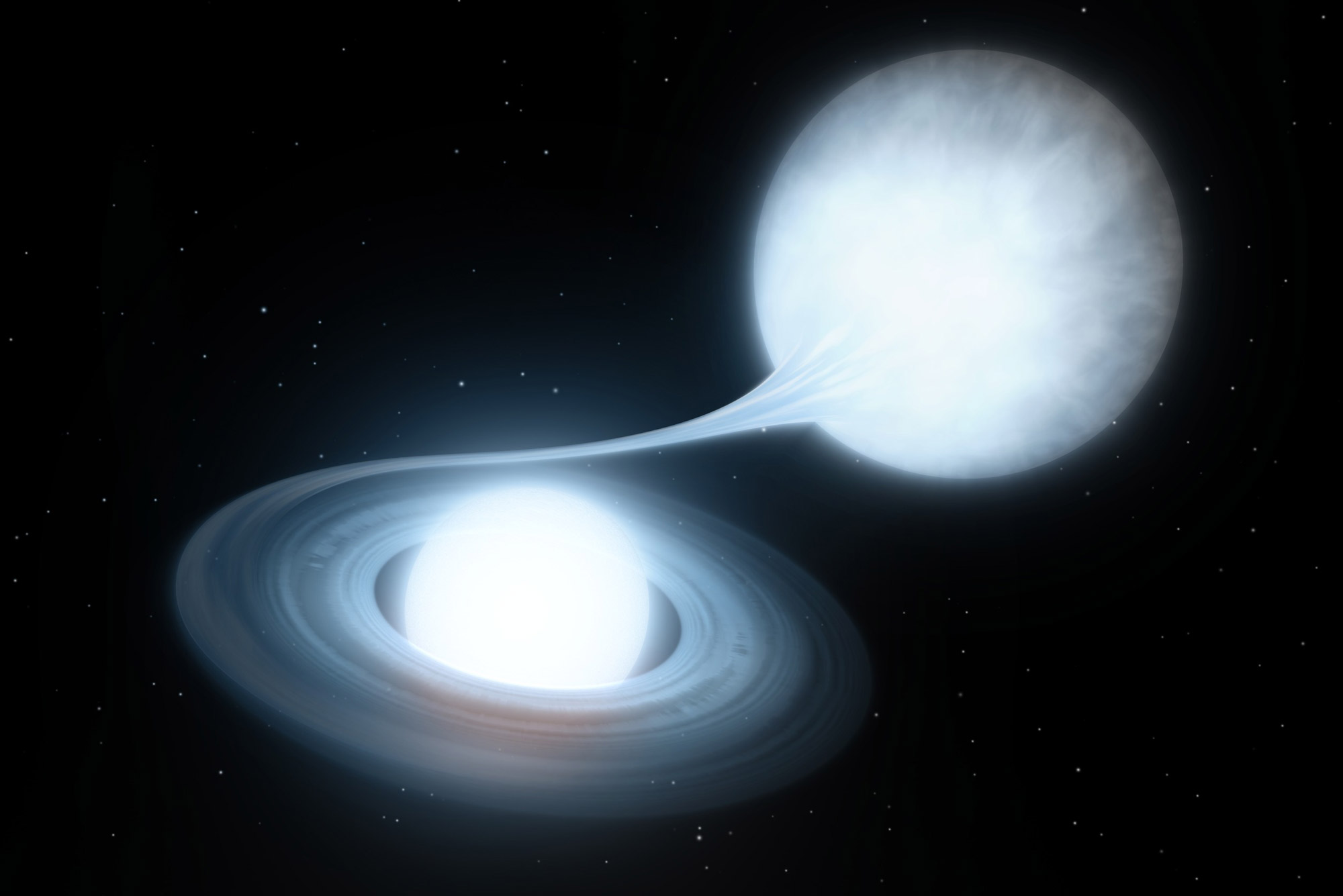 In this artist’s rendering, a close pair of white dwarf stars are set up to eventually explode in what’s called a supernova. This happens when a white dwarf feeds off of its companion star until both of the stars detonate, with sometimes only remnants remaining. Photo courtesy of Caltech/Zwicky Transient Facility

About 2,000 light-years away from Earth, there is a star catapulting toward the edge of the Milky Way. This particular star, known as LP 40−365, is one of a unique breed of fast-moving stars—remnant pieces of massive white dwarf stars—that have survived in chunks after a gigantic stellar explosion.

“This star is moving so fast that it’s almost certainly leaving the galaxy…[it’s] moving almost two million miles an hour,” says JJ Hermes, Boston University College of Arts & Sciences assistant professor of astronomy. But why is this flying object speeding out of the Milky Way? Because it’s a piece of shrapnel from a past explosion—a cosmic event known as a supernova—that’s still being propelled forward.

“To have gone through partial detonation and still survive is very cool and unique, and it’s only in the last few years that we’ve started to think this kind of star could exist,” says Odelia Putterman, a former BU student who has worked in Hermes’ lab.

In a new paper published in The Astrophysical Journal Letters, Hermes and Putterman uncover new observations about this leftover “star shrapnel” that gives insight to other stars with similar catastrophic pasts.

What we’re seeing are the by-products of violent nuclear reactions that happen when a star blows itself up.

Putterman and Hermes analyzed data from NASA’s Hubble Space Telescope and Transiting Exoplanet Survey Satellite (TESS), which surveys the sky and collects light information on stars near and far. By looking at various kinds of light data from both telescopes, the researchers and their collaborators found that LP 40−365 is not only being hurled out of the galaxy, but based on the brightness patterns in the data, is also rotating on its way out.

“The star is basically being slingshotted from the explosion, and we’re [observing] its rotation on its way out,” says Putterman, who is second author on the paper.

“We dug a little deeper to figure out why that star [was repeatedly] getting brighter and fainter, and the simplest explanation is that we’re seeing something at [its] surface rotate in and out of view every nine hours,” suggesting its rotation rate, Hermes says. All stars rotate—even our sun slowly rotates on its axis every 27 days. But for a star fragment that’s survived a supernova, nine hours is considered relatively slow.

Supernovas occur when a white dwarf gets too massive to support itself, eventually triggering a cosmic detonation of energy. Finding the rotation rate of a star like LP 40−365 after a supernova can lend clues into the original two-star system it came from. It’s common in the universe for stars to come in close pairs, including white dwarfs, which are highly dense stars that form toward the end of a star’s life. If one white dwarf gives too much mass to the other, the star being dumped on can self-destruct, resulting in a supernova. Supernovas are commonplace in the galaxy and can happen in many different ways, according to the researchers, but they are usually very hard to see. This makes it hard to know which star did the imploding and which star dumped too much mass onto its star partner.

Based on LP 40−365’s relatively slow rotation rate, Hermes and Putterman feel more confident that it is shrapnel from the star that self-destructed after being fed too much mass by its partner, when they were once orbiting each other at high speed. Because the stars were orbiting each other so quickly and closely, the explosion slingshotted both stars, and now we only see LP 40–365.

“These are very weird stars,” Hermes says. Stars like LP 40–365 are not only some of the fastest stars known to astronomers, but also the most metal-rich stars ever detected. Stars like our sun are composed of helium and hydrogen, but a star that has survived a supernova is primarily composed of metal material, because “what we’re seeing are the by-products of violent nuclear reactions that happen when a star blows itself up,” Hermes says, making star shrapnel like this especially fascinating to study.

This research was supported by a NASA TESS Cycle 2 grant; the European Research Council; a UK Science and Technology Facilities Council grant; the postdoctoral fellowship program Beatriu de Pinós, funded by the Secretary of Universities and Research (Government of Catalonia); the Horizon 2020 program of research and innovation of the European Union under a Maria Skłodowska-Curie grant; NASA’s Astrophysics Theory Program; and by a Leverhulme Research Fellowship.

There are 3 comments on Why Is This Weird, Metallic Star Hurtling Out of the Milky Way?

Why Is This Weird, Metallic Star Hurtling Out of the Milky Way?
3
share this