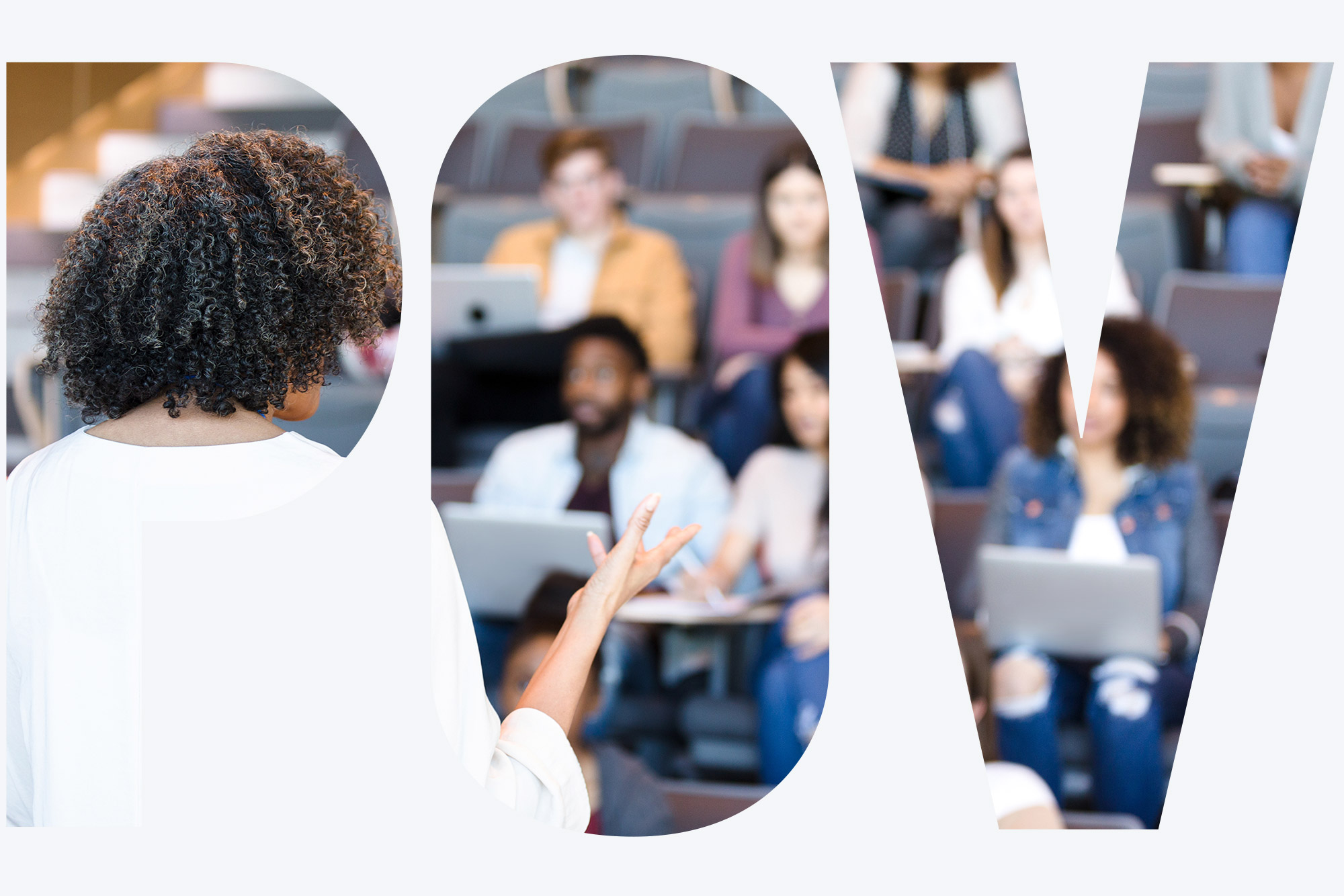 POV: Where Are the Tenured Black Female Professors?

What we need to do to support Black women in academia

Black female faculty are scarce. But what role do you play in diversifying campuses, facilitating opportunities, and amplifying Black female voices in research and classrooms?

A recent Chronicle of Higher Education article reported that as of the fall of 2019, only 2.1 percent of tenured associate and full professors at US universities and colleges were Black women. A Boston Globe story noted that Boston University has 700 tenured faculty members, 7 of whom are Black women. This isn’t quite the elite 1 percent to which people aspire. How did we get here?

Some inappropriately blame Black women, arguing that the metrics for tenure are clear, and if they fail to “measure up,” then they do not deserve tenure. This mindset supports and reinforces the actual answer—systemic racism and a false reliance in the meritocracy myth. In the Jim Crow era, “whites only” signage was used to keep Blacks out of certain spaces. Today, the illustrious “ivory tower” remains one of the whitest spaces in America—educating our children, shaping minds, and perpetuating societal problems for generations. While universities lack visible discriminatory markings, they often use the false pretense of “merit” and “qualifications” as gatekeepers to maintain the status quo.

Black women experience institutional barriers at every stage of the academic process, starting with admission into graduate programs, yielding a small pool of credentialed graduates available for tenure-track faculty positions. Then the tenure process further culls the herd. Many non-Black faculty fail to recognize the system at work and their personal complicity in proactively upholding it. Instead, they choose to believe that people’s success is primarily linked to their own achievements, instead of acknowledging that the system was specifically designed to work for them and affirm the continual advancement of white scholars at the expense of Black and brown achievement.

To gain tenure, professors are expected to establish themselves as nationally recognized scholars in their field. The core criteria for determining tenure are (1) teaching, (2) research, and (3) service. While this sounds fair on the surface, each of these benchmark categories is fraught with bias against those from systematically marginalized groups (SMGs).

Teaching excellence is often assessed using student evaluations. However, students themselves often discount the credentials, credibility, and authority of faculty from SMGs. There are numerous studies demonstrating that race, gender, nationality, course topic, and even the time when classes meet can negatively impact the scores professors receive. Given prejudices, this does not bode well for Black women, since being white and male garner the highest scores.

Publications are a key measure of scholarship and productivity, yet here again research from several major publishing houses shows significant biases against women authors and those from SMGs. Studies also show that papers with female authors are less cited than those written by men. It is also often extremely challenging for SMGs working on topics based on race to get editors from major journals to even consider publishing their work, due to prejudice. As a result, SMG faculty publish their work in specialized journals that are lesser-known to their white colleagues, which tend to be looked upon less favorably. Recently, the University of Virginia denied tenure to Black professor Paul Harris, claiming he failed to meet the expectations for publishing. The promotion committee discredited his peer-reviewed publications in the Journal of African American Males in Education by calling them “self-published.”

The number and quality of invitations to conferences and department colloquia are also critical to getting tenure. Yet, who gets invited is typically based on professional networks that Black women frequently lack full access to. Similarly, young investigator awards tend to be awarded based on the applicant’s pedigree rather than actual accomplishments. Here again, Black women are disadvantaged, as they rarely attend institutions that get them short-listed for these honors.

In many departments, securing external funding is necessary for tenure. But again, there is tremendous bias against Blacks in the peer-review process of research proposals. One study examined funding outcomes for the National Institutes of Health, the largest funding agency in the United States, and found Blacks were 25 percent less likely to be funded relative to white applicants. One perceived reason was that research on topics related to Blacks and other SMGs was not viewed favorably by reviewers.

Service is often the least valued category for tenure decisions. Most institutions say faculty should spend about 10 percent of their time on supporting the institution outside of their “day jobs.” However, universities lean heavily on faculty of color—overburdening them and demanding higher levels of service without just reward and adequate recognition. This happens since campuses lack diversity and then repeatedly turn to the handful of professors of color to carry the load, assisting on efforts like diversity committees, recruiting efforts, and mentoring. Much of this disproportionate service falls on Black women. While many Black women find work like mentoring rewarding, this work does not enhance their dossiers and takes up significant time that could and should be better invested in their scholarship. Tenure committees rarely give appropriate credit for this service and unfair overtaxing.

The additive effect of these disparities can be damaging. In addition, the standard for tenure is not as clear-cut as many would think. Since faculty are still evolving at that stage in their careers, an often-used scale is the demonstration of a positive upward trajectory—meaning evidence that the faculty member’s career is on track and looks promising for continued growth and success. This is a sliding scale and can be applied leniently to some and harshly to others. Most academic institutions have a mixture of faculty—some are superstars, and others are good role players. Black women are not afforded the liberty of mediocrity that some of their majority counterparts enjoy. They are seldom forgiven for any blemishes in their records, even when a whole system is working against them. The extremely small numbers of Black women faculty, especially at the rank of professor, means that it is unlikely that there will be any involved in the review process. Thus, Black women often do not have an advocate in the room to provide context.

This summer, the University of North Carolina at Chapel Hill denied Nikole Hannah-Jones, a Pulitzer Prize–winning author and MacArthur “genius” award recipient, a tenured faculty appointment as a Knight Chair in Race and Investigative Journalism. This, even though all previous Knight chairs—most of whom are white males—were hired with tenure. The incident gained national attention, as many in the academy wondered why an institution would have such a double standard. However, some of us already knew the answer—because she is Black and writes about systemic racism and America’s complex history starting from slavery.

For Black women in the academy, Jones was a modern-day Rosa Parks, bringing attention to the significant underrepresentation of Black women within the ranks of tenured faculty in the academy. Her situation highlighted the fact that Black women often pay the same fare, or even a higher price, for acceptance into faculty ranks, yet are seldom offered the validation of their efforts with tenure.

As Bishop Desmond Tutu said, “If you are neutral in situations of injustice, you have chosen the side of the oppressor.” So, I ask that you do not sit quietly and observe these systems of oppression at work. Instead, strive to support Black women by: 1) advocating for classroom visits to review teaching quality instead of student evaluations; 2) lobbying the major publishing groups in your field to take steps to mitigate bias in peer review; 3) inviting Black women to speak in department colloquia or conferences; 4) collaborating with them and inviting them to participate in large research grants; 5) citing their work when appropriate, and calling out others who fail to do so; 5) keeping promotion and tenure discussions on track by shutting down inequitable lines of inquiry; and 6) stop asking Black women to do unpaid labor.

Upon learning about an endangered animal species, many Americans would go to great lengths to ensure protections for their survival and recovery, and population growth. I need you all to keep that same energy when it comes to Black female faculty. It is time for all faculty to acknowledge their role in the system and work towards change.

POV: Where Are the Tenured Black Female Professors?

There are 14 comments on POV: Where Are the Tenured Black Female Professors?

POV: Where Are the Tenured Black Female Professors?
14
share this