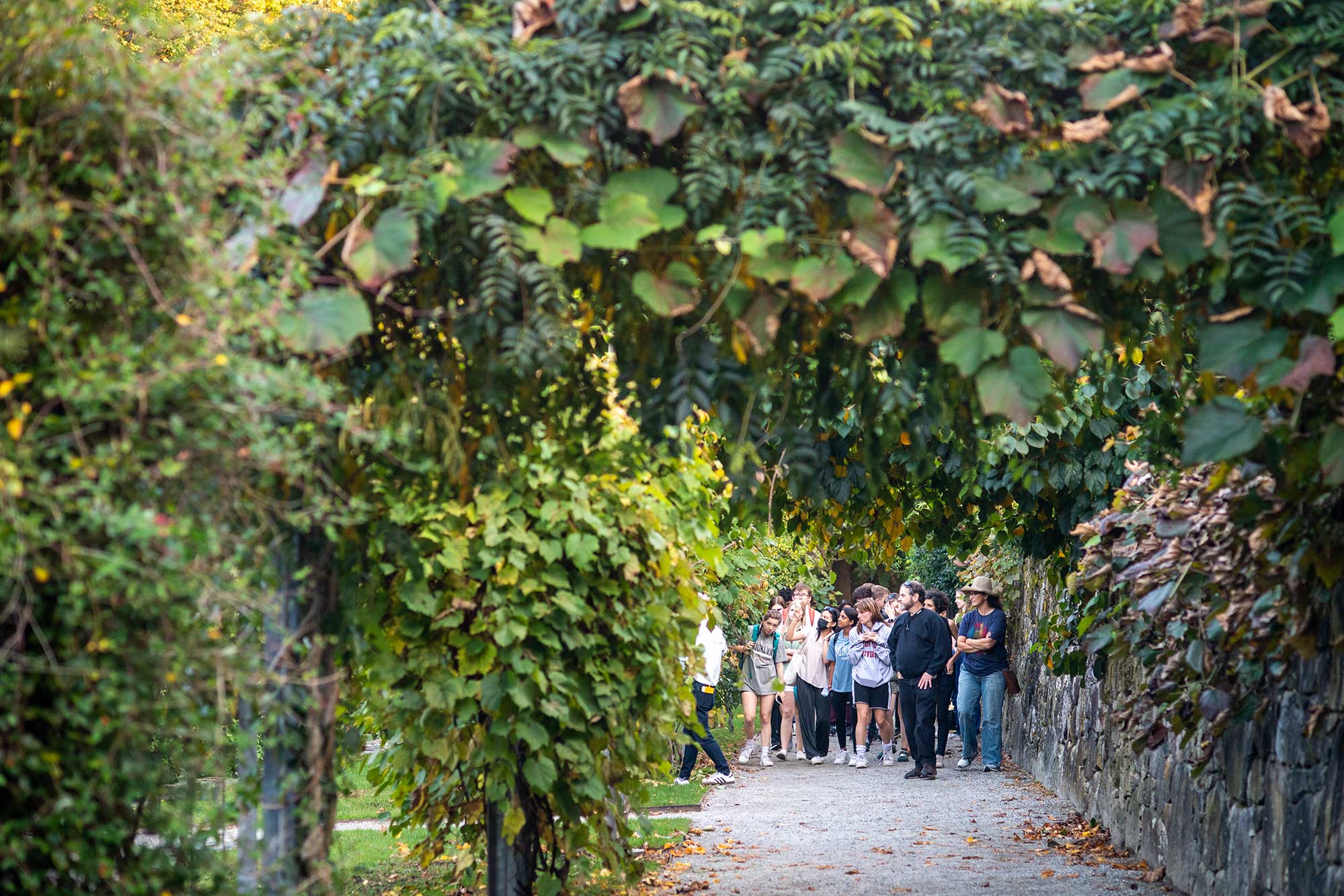 Students in a BU class on plants—their biology, anthropology, and literary roles—toured the Arnold Arboretum in Boston last month.

A biologist, an anthropologist, and an English professor team up for Kilachand Honors College course The Secret Life of Plants

You just knew sex was bound to come up in a class called The Secret Life of Plants.

It’s mid-October as 20-plus Terriers tour the Arnold Arboretum, Harvard’s 281-acre botanical preserve. Their guide addresses an old question in biology—what exactly is a species? Michael Dosmann, keeper of the Arboretum’s living collections, offers one definition, which distinguishes a species by its inability to reproduce with other, different organisms. The principle is seen in animals, but “in plants, there’s a little more fluidity,” Dosmann says, citing the oak tree towering nearby. “Oaks are highly, um—um—adventurous.”

As risqué goes, it might not have been Bridgerton. But after all, this class is for students in the academically high-powered Kilachand Honors College. As they roam the Arboretum’s verdant copses, freckled with mid-autumn yellows and crimsons, the students learn other facts that make plants seem, well, sort of human. Such as “arboreal suicide,” Kaufman’s term for how a tree’s own roots can strangle it.

The anthropomorphizing is intentional. Mixing insights from life science (Kaufman, a College of Arts & Sciences professor of biology), anthropology (Caterina Scaramelli, a CAS research assistant professor of anthropology), and literature (Adriana Craciun, a CAS professor and Emma MacLachlan Metcalf Chair in English), the class ponders flora’s possible intelligence and communication abilities, a theme flagged by the syllabus: “What do plants know?”

“We led into that segment by looking at carnivorous plants,” says Nashr El Auliya (ENG’24). “They actually have a method of getting food that seems a lot like hunting. It’s like trapping animals. That brings up the question of, all right, this looks like it has agency, but…how do we define agency?” That “was really mind-warping to me. I was like, do I really want to think of plants that way?…But that is the entire point of the class.”

“This class kind of makes me think a little bit differently about the world,” agrees Nourhan El Sherif (ENG’24). “One interesting topic that we talked about was plant ethics and how plants interact with one another in the space of nature.”

Agency? Ethics? Such talk has given biochemistry major Tyler Critz (CAS’24) a newfound appreciation for our leafy, rooted, flowering friends.

“All of my life, I’ve been a very good plant killer, specifically house plant killer,” he says. “I overwater them, or I don’t water them enough.… With this class, it kind of opens up a new door to say there are things other than just how a plant looks, how the flowers look.”

But if plants have agency, does that raise the same moral issues for vegetarianism as for meat-eating? “I have been thinking about that for my entire life!” says Craciun, a vegetarian for almost four decades. “I am sure that it will be one of the things we discuss at the end of the class about students’ changing conceptions of plant life, because I am curious. Plants and food, and food politics, will be looming large at the end of the class.”

Did we mention The Secret Life of Plants is interdisciplinary?

“There must be a joke somewhere about bringing an anthropologist, an English professor/historian of science, and a biologist in a room,” muses Scaramelli. “Maybe by the end of the semester, we can get you a punchline.” She recounts the class’ genesis during a CAS dinner in February 2020—their last such gathering before COVID-19 halted indoor assemblies—as she and Craciun were discussing their intersecting interests. Craciun suggested they co-teach a course on plants with a biologist.

“My own work is unusually interdisciplinary for a literature professor,” Craciun says. (She’s researching a book on a Norwegian seed storage facility used for global food security, and “the ways in which scientific and cultural understandings of plants have changed dramatically and surprisingly since the 17th century Scientific Revolution.”)

“I do anthropology of the environment and science, and did research on wetlands for some time,” Scaramelli says, “and now have been interested in agrobiodiversity and questions of traditional garden/vegetable varieties.”

Kaufman, meanwhile, cites his “obsessive interest in carnivorous plants” and his former hobby of raising orchids. “Although my principal work is in marine systems,” he notes more seriously, “an important sideline of my research program deals with the recovery of tropical forest communities after deforestation or natural disturbances.”

All of which is to say that plants touch multiple aspects of life. “Our class is focused on the questions of what plants do,” says Scaramelli, “how they move, grow, sprout, form symbiotic relationships, transmit information, and how they transform place. For me, a takeaway is that the world of humans is really mediated by plants. We can’t think of plants outside of the social, historical, ecological context in which they live, and outside of the relationships they form and are implicated in.”

Kilachand draws students from across BU’s schools and colleges; most of those in this class are CAS majors in biology or natural sciences. But what El Auliya calls the “weird combination” of disciplines is precisely the draw for a STEM student like him: “It just seemed like a really wild, outlandish idea, where you just join all three professors in this really interesting setup.”

New Interdisciplinary Class Asks: “What Do Plants Know?”
0
share this