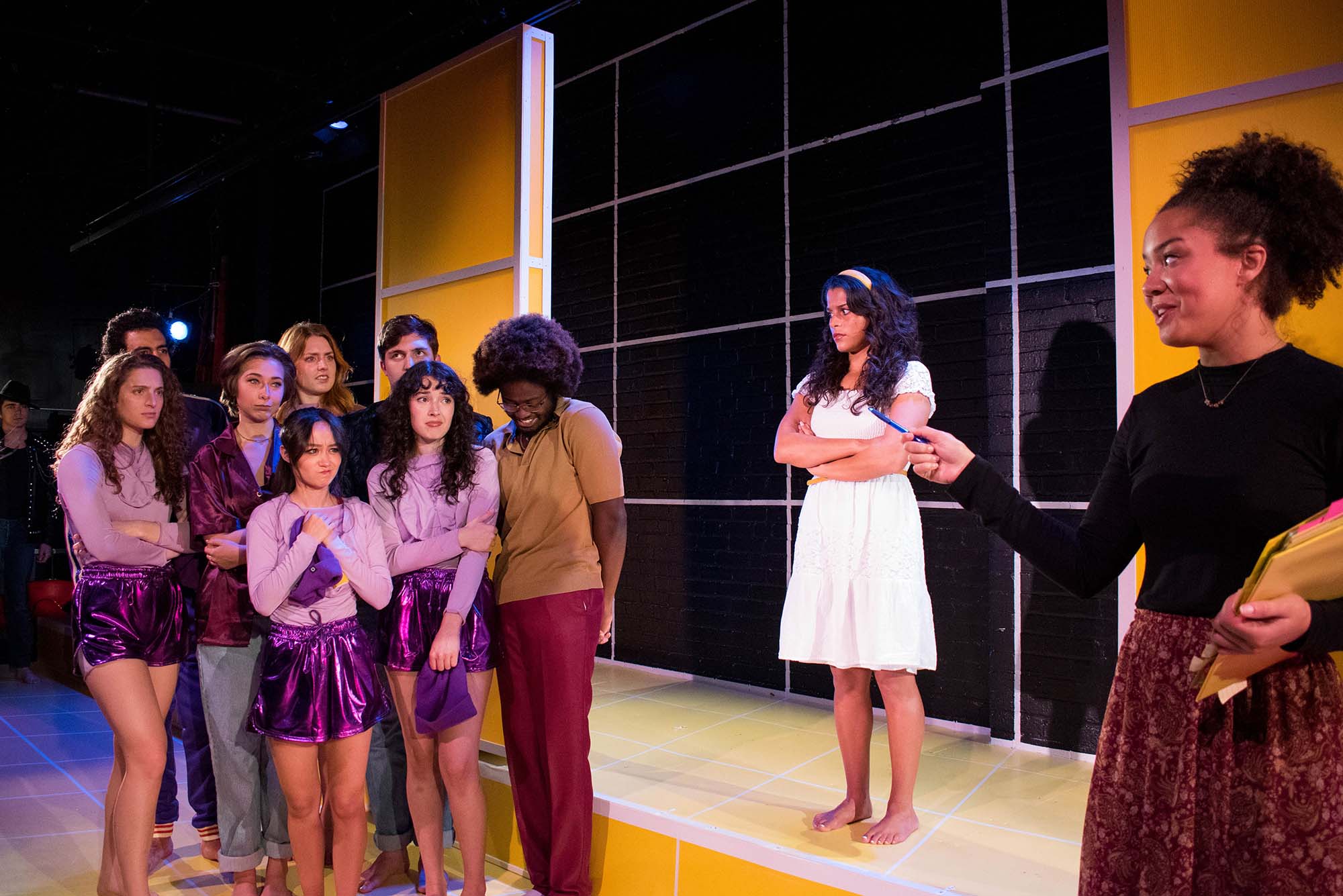 The cast of Lorena: A Tabloid Epic at Boston Playwrights’ Theatre, including Gabriela Medina-Toledo (CFA’21) as Lorena Bobbitt (second from right) and Valyn Lyric Turner (CFA’21) as The Playwright (right). Photo courtesy of BPT

Usually the students in BU’s MFA playwriting program get a production of their play in their third year. But the five playwrights in the Class of 2021 got a pandemic instead.

But now they’re returning to campus to see their shows hit the stage at the Boston Playwrights’ Theatre (BPT)—a year later than planned—beginning tonight with Lorena: A Tabloid Epic by Eliana Pipes (GRS’21). The theater is back with live, in-person productions after being shuttered since the pandemic erupted in March last year. Lorena runs from October 14 to 24.

“It feels great to be back live,” says Kate Snodgrass (GRS’90), BPT artistic director. “I get a little weepy from time to time, just because I’m so happy to see everyone.”

BPT is doing everything according to the University’s COVID protocols. Lorena will be produced in the “black box,” or front theater, with capacity held to 50 percent (50 seats) to allow for social distancing. Audience members must be masked and show proof of vaccination. The actors will be unmasked for performances, but there’s a safe distance between them and the audience, Snodgrass says. The theater even got new ventilation equipment during the pandemic.

“It’s a thrill to be back in person in rehearsal, having the bodies in the room and the energy that provides, which is so positive,” says Snodgrass, a College of Arts & Sciences professor of the practice of playwriting. “I am so looking forward to sharing these plays with an audience. Even if it’s five people, I’m happy.”

Normally BPT alternates between seasons featuring plays by MFA students  and work by alumni. This time around, it’s both, because the five MFA playwrights graduated last May and are now alums.

“I am so looking forward to sharing these plays with an audience.”

“They didn’t get a production, and that’s pedagogically important for them, to be in there with an audience and go through that whole process,” Snodgrass says. They were able to see their plays in private Zoom workshops with actors and a director, so the plays are “closer to a finished product than in any other season.”

During the pandemic, BPT kept busy producing two virtual installments of the annual Boston Theater Marathon, which together raised more than $75,000 for the Theatre Community Benevolent Fund. That’s “pretty wonderful,” says Snodgrass, who is also artistic director of the marathon, especially given the heightened need by arts organizations during the pandemic.

There were other Zoom programs, including panel discussions with the MFA playwrights, but no virtual productions of their plays, because of Actors Equity rules.

Lorena: A Tabloid Epic is a whizbang satire of the sensational 1990s true-life story known as the Bobbitt case. After years of what she said was rape and other abuse, Lorena Bobbitt cut off the penis of her sleeping husband, John Bobbitt, with a carving knife and threw it in an open field. Later, it was retrieved and surgically reattached. Unsurprisingly, the case became a huge tabloid sensation as well as a staple of late-night comedians.

Playwright Pipes was too young to remember the case, and knew nothing about it until a friend recounted the story in a phone call.

“I thought my friend was pitching an original idea, and it blew me away,” Pipes says. “I said, ‘Oh my god, that’s the most incredible story I’ve ever heard—you have got to write that,’ and she had to stop me and say, ‘No, no, this really happened.’ Then I dove into researching to learn more about Lorena myself, and I immediately understood why her story had captured the nation.”

As the BPT press release puts it: “The tacky dystopia of American pop culture tumbles onto the stage in a series of funhouse vignettes that know no bounds, while The Playwright desperately tries to protect Lorena from the play which has clearly gotten out of her control.”

The director is Erica Terpening-Romeo (CFA’21), who earned an MFA in directing and is cofounder of the Shakespeare company Anon It Moves and former literary manager of Portland Actors Ensemble, both in Portland, Ore. Lorena is a BU New Play Initiative production, produced by Boston Playwrights’ Theatre and the BU College of Fine Arts School of Theatre.

The other plays in the BPT season are: Gone Nowhere (November) by Daniel C. Blanda (GRS’21), about a young man who, in the wake of his father’s death, leaves the trappings of the big city to seek peace in the great outdoors; Incels and Other Myths  (December) by Ally Sass (GRS’21), about a professor who teaches about women in mythology, who grows concerned when her son spends his time playing an online adventure game; Rx Machina (February) by Caity-Shea Violette (GRS’21), a look at Big Pharma and the opioid epidemic; and Beasts (April) by Cayenne Douglass (GRS’21), about two sisters—an artist and a suburbanite mom.

A timely bequest from a member of Boston’s theater community will pay for the five writers to return from around the country for their productions. The playwrights will be involved in the productions, as they would have been last year before graduating, thanks to the new Jack Welch Fund for Playwrights. Welch, who died in 2017, was a tireless supporter of Boston’s theater community through his work with Baker’s Plays, StageSource, the Massachusetts Young Playwrights’ Project and the Boston Theater Marathon.

BPT has flexibility to spend the annual proceeds from the bequest for the express purpose of helping current students and alumni in BU’s MFA Playwriting Program, and of this year’s playwrights, all but Blanda now live outside the Boston area. How the money will be used in future years is under discussion.

“We hope to support our writers with the same compassion and understanding that Jack showed to all of us so that his legacy may live on undiminished,” Snodgrass says.

Lorena: A Tabloid Epic by Eliana Pipes (GRS’21) is at Boston Playwrights’ Theatre, 949 Commonwealth Ave., from October 14 through 24. Ticket prices are $35 for adults; $24 for BU faculty and staff; $25 for seniors 62+; and $10 for students with valid ID, and can be purchased here. Find up-to-the-minute information regarding performance schedules, COVID-19 protocols, and ticketing on the website under Visit Us > COVID-19 Safety.