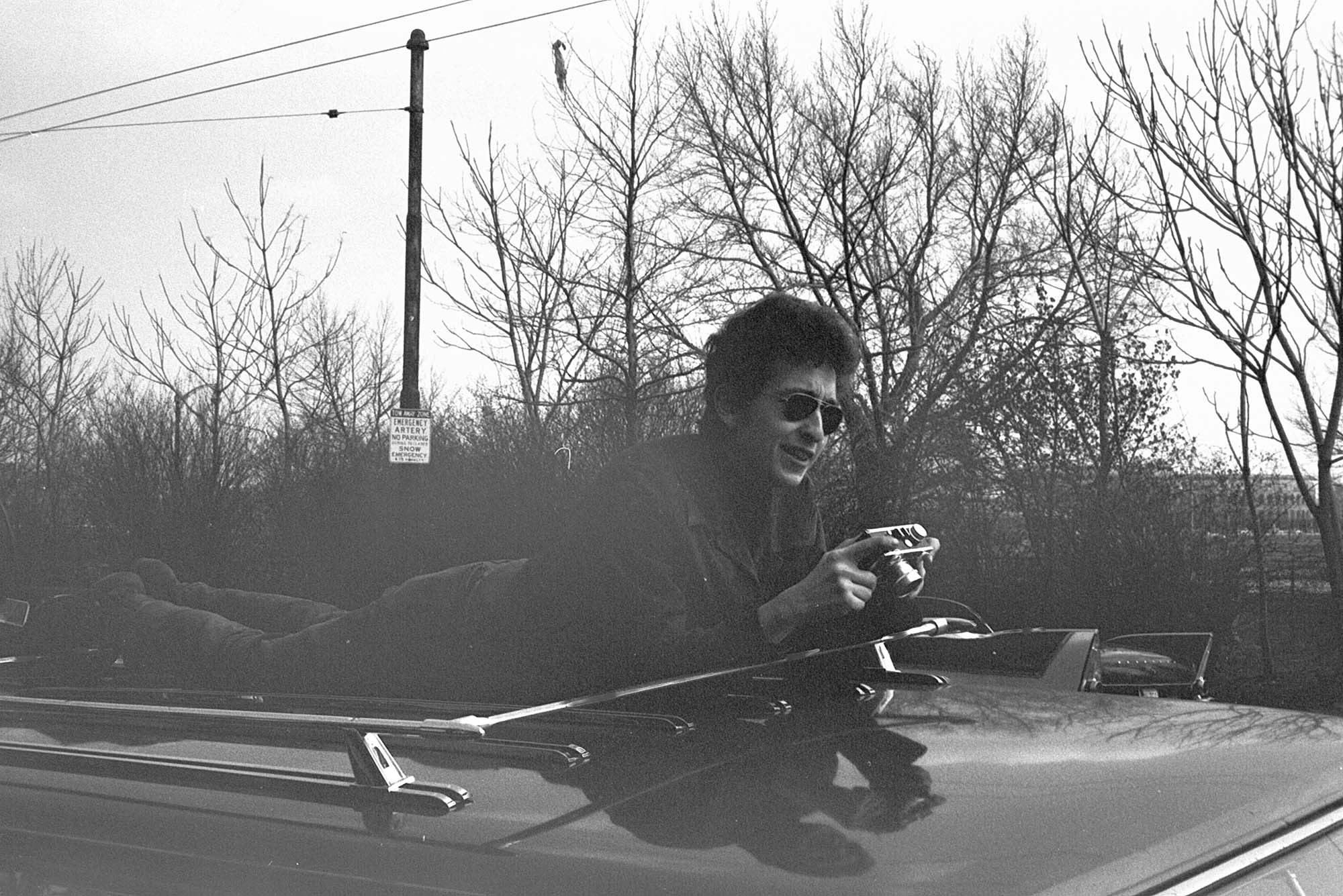 Ahead of his Boston concert, two BU experts on the singer-songwriter’s raspy voice, legendary songbook, and ability to change with the times: “He became allergic to being the voice of a generation”

Dylan clowning atop a car parked on Memorial Drive in April 1964. Cambridge was one of the places Dylan’s career took off, when he played with Joan Baez in folk clubs around Harvard Square. Photo by John Byrne Cooke Estate/Getty Images

Bob Dylan’s so-called Never Ending Tour began in 1988 and continued for more than 3,000 shows—until early 2020, when the COVID-19 pandemic ground it to a halt. Now, after his longest break from the road in more than 30 years, Dylan is back on tour for Rough and Rowdy Ways, his 39th studio album, released in summer 2020. He hits Boston on Saturday night, November 27, at the Wang Theatre (tickets still available).

The Nobel Prize–winning and Grammy Award–winning singer-songwriter, now 80, is notoriously elusive and enigmatic, so we sat down with a couple of Boston University’s most ardent Dylanologists to discuss this latest moment in his 60-year career. Kevin Barents, a College of Arts & Sciences Writing Program senior lecturer, and Jeremy Yudkin, a College of Fine Arts professor of music, musicology, and ethnomusicology, are longtime friends and have been coteaching Bob Dylan: Music and Words on and off for years.

with Kevin Barents and Jeremy Yudkin

BU Today: So you’re going to Saturday’s show together. Do you never miss him?

Yudkin: I’ve missed a lot. In the ’70s and ’80s, he did these grotesque shows in which he was obviously mocking the songs, mocking his popularity, mocking the audience for coming to a show in which he really didn’t sing, he was just snarling. That put me off.

Barents: To say he’s on and off is an understatement. It also depends on the venue. Seeing him in a big stadium, he’s just leaning into the keyboards and going through the motions. But I saw him maybe five years ago at an old theater in Worcester, and it was just an amazing show. He was playing guitar and sounded great. I’m really optimistic about the Wang Theatre as a venue.

This is the Rough and Rowdy Ways tour…

Yudkin: I’m excited about the fact that he’s doing his latest album—and that, he never used to do. There’s always this backlist of hits that he used to do. The challenge for him, and it’s an understandable challenge, is that he wants to make it different for himself. He couldn’t possibly survive if he sang the same songs the same way a thousand times. So he’s trying to keep himself musically alive. But it’s often at the cost of our own understanding and appreciation of the performance. Right now, since he’s doing Rough and Rowdy Ways, and it’s a new album, I’m hopeful that he will sing them fairly straight and not muck around with them.

Where does Rough and Rowdy Ways rank among his albums, including his great work of the 1960s?

Yudkin: Surprisingly high on the list. I have not fallen for Dylan’s recent American Songbook, Frank Sinatra stuff. I like those songs, and I like to hear them sung by other people. So I’ve been disappointed. But every so often there is an absolute gem that comes out of Dylan. Time Out of Mind (1997) I think is a masterpiece. And Rough and Rowdy Ways, in its curious, somewhat self-reflective way, is also a great album. It’s quite remarkable that somebody whose career goes back to 1962 can come up with great music like that.

Barents: I would put a few of his albums from the last 30 years up there with the best of the electric trilogy of the 1960s or even Blood on the Tracks, which is my favorite. Some of the songs—“Love Sick,” “Tweedle Dee & Tweedle Dum,” “Tempest”—are just great and things that he probably couldn’t have done earlier. The production is spot-on, the music is amazing and perfect for the songs. He’s got a crack band and knows how to use them in the studio. He’s more mature as a songwriter than he was back in the ’60s, and an album like this one is more perfect than some of his more acclaimed earlier albums.

What about that band, anchored since 1989 by bassist Tony Garnier?

Yudkin: The thing about Dylan nowadays is that he can command the greatest musicians available. They have this uncanny ability to play along so that it enhances the song, it doesn’t get in the way of the song. The backup is perfect, the fills are brilliant. So when you hear him on tour, part of the joy is hearing those fabulous backing musicians

For many people who don’t like him, it’s because of his voice, which has gotten even more, um, distinctive over the years.

Yudkin: Let me put it into context. Very frequently in the ’60s, people said, ‘I love his songs, but I can’t stand his singing.’ I have always thought that was a misunderstanding of what great singing is. Great singing is not the quality of the voice, it’s the use of the voice that you have. The placement of the pitches, the threading of the line of the melody, the draping of the rhythm across the beat. You know, Billie Holiday didn’t have a great voice, in the sense of a great-sounding voice, and Dylan doesn’t either, but he’s a wonderful, wonderful singer. And even since he started becoming really raspy, around Time Out of Mind, he’s still a great singer. Because it’s not about the sound production, it’s about the use of the instrument he has, and that’s his instrument now. That’s the way life goes, you get raspy as you get older.

Barents: The fact that he does Sinatra and the American Songbook now, at this age, with that voice, and fairly convincingly, I think is testament to his great singing, his great phrasing.

What does Dylan’s longevity mean?

Yudkin: The person in music Dylan reminds me of is Miles Davis, because Miles Davis continually re-created himself, and in so doing re-created what jazz meant. He was at the forefront of new styles every 10 years of his life. And also he remained innovative until quite late in life. Unfortunately Miles didn’t live that long.

Barents: He was supernaturally productive in his 20s. Insanely. Even he looks back and says, ‘I have no idea how I did that.’ He was not much older than these students when he made the body of his work that he’s best known for. He also had a good two decades when there was not that much good stuff coming out. He was doing the work, writing songs, but very few that are comparable to his late or his early period. But now we’re at a point where he can take five years to do an album. He has the time to lavish on it, and I think that might be part of it too. There’s something supernatural about being able to do it at all. The fact that he can do it while touring incessantly is also pretty amazing—and at that age.

In the ’60s, the times were a-changin’ and he was a fiery voice at the center of the culture. Not many kids listen to Bob Dylan anymore, or even listen to music with guitars. What is it to be Bob Dylan and 80 years old in today’s world?

Barents: In “My Back Pages,” he says, essentially, “I’m not going to do that kind of finger-pointing song again.” There were a few more, but that’s a criticism I often hear, “Why aren’t you more political?” Nobody occupies that kind of space anymore in music. People now have their one or two kinds of culture, but it’s all in isolation, and you don’t have the kind of audience anymore where everyone could talk about the new Dylan album. It’s all in silos. I don’t think anyone can be the one figure anymore like Bob Dylan was.

Yudkin: He became allergic to being the voice of a generation, because people would ask him such stupid things, about politics, about the world, and he got tired of it so quickly. He must have said to himself, “I’m just not doing this anymore.”

The Never Ending Tour was going on for a long time before the pandemic, and now he’s back on the road, at 80! There’s some sort of loneliness there…?

Yudkin: Being a superstar is by definition an exceedingly lonely life. Anybody who has become world-famous has tended to retreat, perforce you have to or you get your clothes torn off. I think it’s terribly sad, a product of our celebrity culture. He can’t go shopping, he can’t go anywhere. Occasionally there’s a sighting, but he’s had to live, by necessity, an extremely lonely life. He’s also a strange guy.

Barents: (Laughter) Yeah, by all accounts! He defines himself as a song and dance man, and that’s his life. And he’s been living that life for a long time.

Yudkin: He feels in his element when he’s onstage. If he’s sitting home watching television, he’s not content. And that has been the case all his life.

The Nobel Prize–winning singer, songwriter, and voice of several generations returns to play Boston after a long COVID hiatus from the road.

There is 1 comment on Bob Dylan Now: Hitting the Road Again, at 80

Bob Dylan Now: Hitting the Road Again, at 80
1
share this