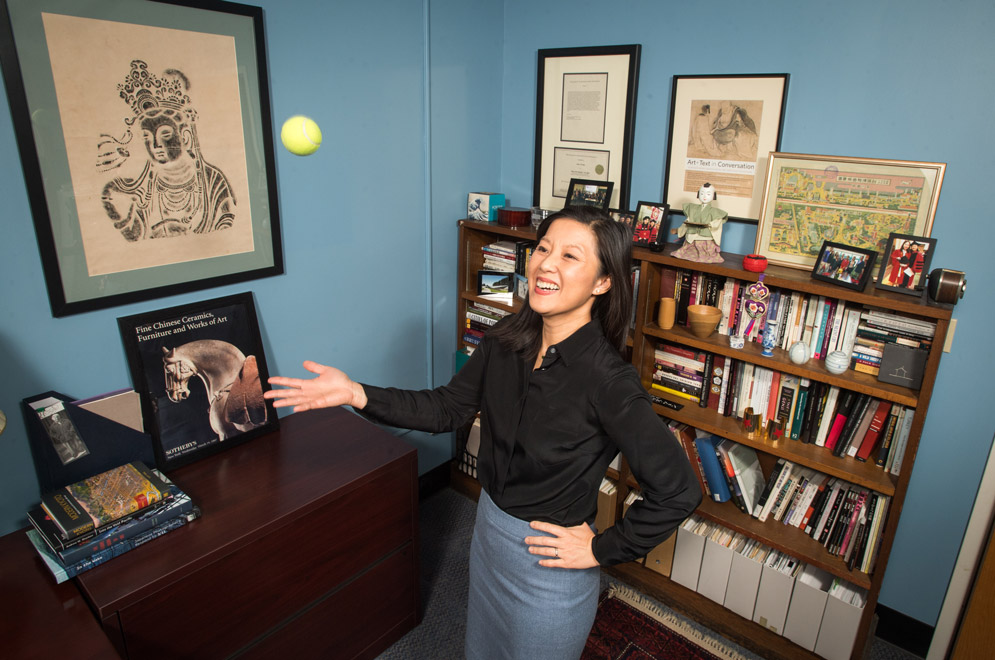 Click on the circles for more about what Alice Tseng displays in her College of Arts & Sciences office.

Some of the most prized possessions in Alice Tseng’s office are gifts she received when she became chair of the BU history of art and architecture department in 2016.

A College of Arts & Sciences associate professor of Japanese art and architecture, whose research focuses on the 19th and 20th centuries, Tseng has authored three books, is a cocurator of the online exhibition Asia at the World’s Fairs, and consulted on the Museum of Fine Arts recent exhibition Royal Celebrations in Japan, a collection of historical postcards depicting that country’s royal family.

Among the items Tseng displays in her CAS second floor office is an ink rubbing of a Guanyin (the Buddhist goddess of mercy) figure, given to her by her predecessor, Bruce Redford, a CAS professor emeritus of history of art and architecture. Tseng describes Guanyin is a “guardian figure to watch over humans,” and, she says, “it was very nice gesture for him to leave to me.” It’s from Taiwan, where Tseng was born, making it even more special. Redford also gifted her with his rug, desk, and lamp.

Tseng grew up in a family of artists, and credits her father with strongly influencing her appreciation of art, architecture, literature, music, and history. Another formative influence was her high school studio art teacher, who urged students to learn more about artists and the histories of canonical works. When she did her undergraduate work at Columbia University, she wasn’t sure what she would major in, but she remembers being thrilled to learn that there was an entire department of art history and a library dedicated to just art and architecture.

She first majored in architecture, but soon began taking classes in history of art and architecture, as well. Subsequently, she took Japanese language classes, became hooked, and joined her two loves. “By the end of college, I knew that I wanted to be a historian of Japanese art and architecture and have been on this path ever since,” she says. “I thank my liberal arts education for allowing me the flexibility to hone in on what I truly wanted to devote my career to after an all-encompassing education in the humanities, sciences, math, and foreign languages.”

Currently on leave for the semester (she’s using the time to research the visual and spatial representations of Japan’s modern emperors), Tseng will speak Wednesday about her work at the annual History of Art & Architecture Lecture Series. Her talk will focus on early 20th-century Emperor Taishō, the first Japanese emperor to have his entire life—formal portraits, places he visited, ceremonies—captured in newspapers, postcards, and magazines.