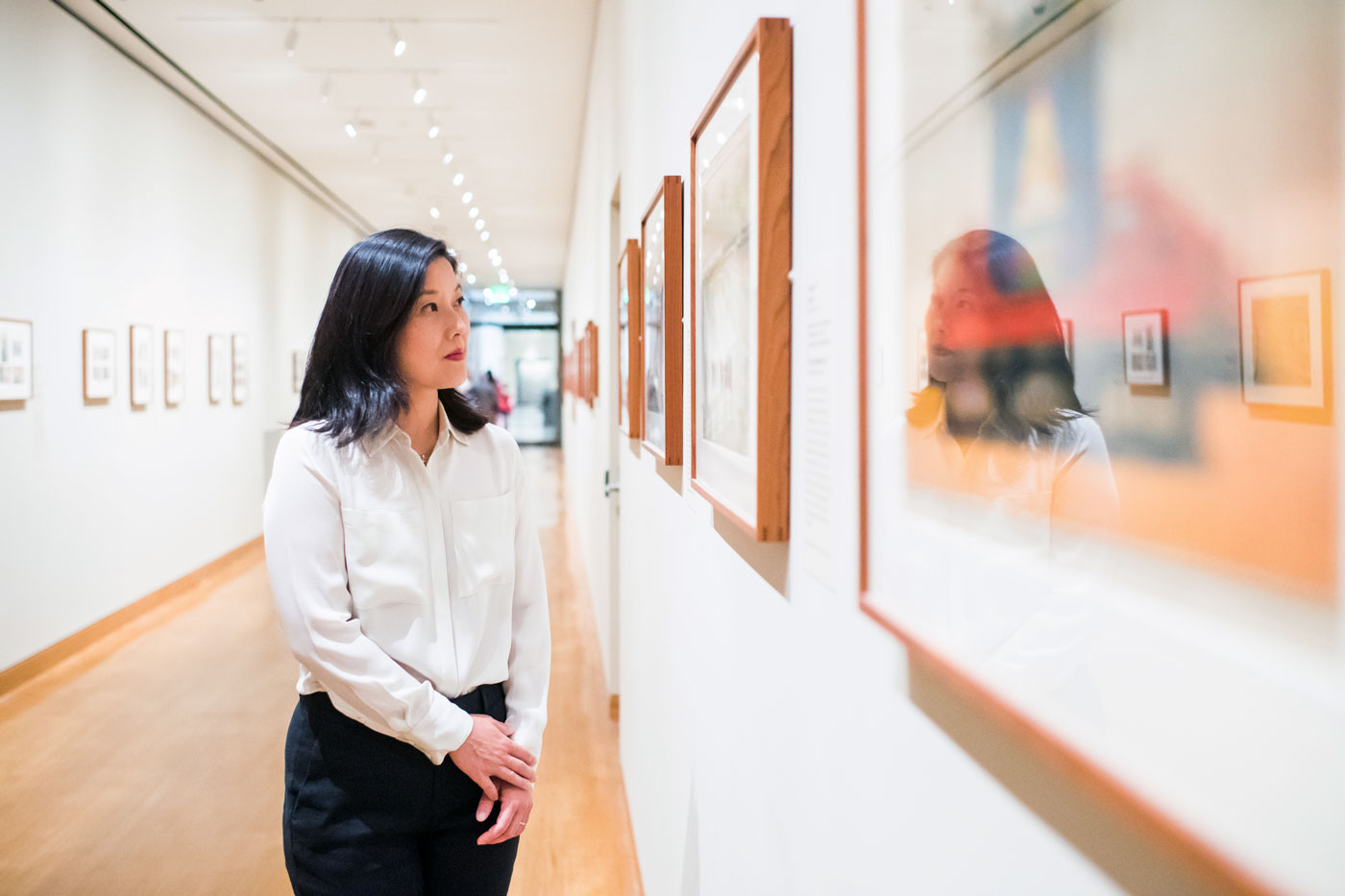 The Japanese imperial family—the oldest royal line in the world—is in the midst of a historic transition of reign. By talking with Alice Y. Tseng, chair of Boston University’s department of history of art & architecture, it becomes clear that despite the Yamato Dynasty’s continuity of power (126 monarchs and counting since 660 BCE), Japan’s royal family has bound generations together through strong traditions that continue to shape the country’s culture, infrastructure, and public policy.

Tseng, who is a College of Arts & Sciences associate professor of Japanese art and architecture, has done extensive research on Japanese art and architecture, revealing a cohesive story of the imperial family’s influence through time. Her book Modern Kyoto: Building for Ceremony and Commemoration, 1868–1940, published in October 2018, explores the architectural and urban changes that happened in Kyoto after Japan’s imperial family moved to Tokyo in 1868. She also was a consultant for the Museum of Fine Arts exhibition Royal Celebrations, a collection of prints and postcards depicting the Japanese imperial family throughout history, which is on display until the end of July. Tseng, using her insight from the Royal Celebrations exhibition and from her research that went into the writing of her book, reveals how the past still influences the Japanese imperial family as the new emperor and empress start their reign.

On April 30, 2019, former Emperor Akihito, the 125th monarch to rule in the line of Japan’s imperial family, willingly abdicated the Japanese throne. It was an extremely rare move for a member of the imperial family (the likes of which has not happened since 1817, when Emperor Kokaku became the first emperor in several hundred years’ time to rule past the age of 40, after which he decided to hand over the throne to his much younger and healthier son). Likewise, upon the recent abdication of Akihito, who is currently 85 years old, the throne was passed to his son and successor, Naruhito.

For Akihito to be able to give up the throne, which he wanted to do for age- and health-related reasons (not unlike his ancestor Kokaku), Akihito went through a lengthy process to persuade Japanese cabinet members to change an existing law that prevented him from abdicating. Since ascending the throne on May 1, 2019, Emperor Naruhito, along with his wife, Empress Masako, are now preparing for October of this year, when the formal enthronement ceremony will take place.

The Brink spoke with Tseng about the historical influence of Japan’s imperial family in hopes of gleaning a better understanding of how tradition is shaping what we will see surrounding the enthronement of Japan’s new emperor, Naruhito, and empress, Masako.

The Brink: How has art depicted the imperial family over time?

Tseng: Before the modern period, which began in the mid-19th century, portraits of elite men and women were created for private use, typically for posthumous memorial services rather than for personal appreciation or pleasure. Popular circulation of the emperor’s image was completely out of the question since the emperor was considered to be a living, divine being. A radical shift occurred after Japan began diplomatic and cultural exchanges with Europe and the United States in the 1850s, when members of the imperial family and the nobility participated in the international practice of exchanging formal portraits. This exchange practice—and the introduction of photography—regularized the creation and circulation of portraits for every emperor and empress since then.

The Brink: You were a consultant for the MFA’s Royal Celebrations exhibition, a collection of Japanese prints and postcards that depicts past ceremonies—including enthronements, weddings, births, and state visits—of the imperial family. In light of the historic transition happening in Japan right now, as Emperor Naruhito prepares for his formal enthronement ceremony later this year, are there specific pieces from Royal Celebrations that you feel are especially meaningful for us to look at today?

All of the works on display at this exhibition, prints and posters created in large quantities starting in 1868 with the reign of Emperor Meiji, were, for the first time in Japanese history, produced for popular consumption. That aspect of these works drew me to them…the fact that before Japan’s defeat in World War II in 1945 (when the emperor ceased to be considered a divine being), his image could nonetheless be freely circulated in myriad creative designs and endless copies. The open visibility of the Emperor Meiji, his consort, and his children, directly connects to the current celebrations of the new reign that started on May 1. The ascension event and enthronement ceremonies, which will take place this fall, are for all of Japan’s people and those around the world to witness and celebrate, encouraging speculation and excitement about the future to come.

What I love about looking at the works in Royal Celebrations is to see how artists freely mixed imagination and documentation to express the imperial subject. For example, a Tanaka Ryōzō print showing the emperor seated inside the Takamikura throne, is a fanciful and richly detailed rendering, although not particularly accurate or to scale. Tanaka conveys the grandeur of the throne structure and royal figure successfully through the luxurious palette of primary colors and fine patterns. Another particularly fine work in the collection is a postcard that features a collage effect of subdued black-and-white imagery juxtaposed against the texture of embossing and the sheen of metallic pigment. These artworks depict the sacred solemnity and spirited splendor of the enthronement ceremonies.

The Brink: Women traditionally have not been allowed to attend an emperor’s ascension ceremony, and Empress Masako was not exempt from that old rule during Emperor Naruhito’s ascension ceremony. Despite this, she recently played an integral role in a state visit with the Trumps. How are the roles of women in Japan’s imperial family shifting over time?

The full visibility of the emperor, and of the empress as his equal partner, to the world may be considered the norm today. However, it was only since the Empress Emerita Michiko that the imperial couple presented themselves as a singular unit. In the time of the Emperor Emeritus Akihito’s parents and grandparents, the emperor and empress routinely visited events on separate days; and even when they made joint appearances, the empress walked several steps behind her spouse to indicate deference. The new emperor shows every sign of wishing to continue to uphold his empress as a significant and equal partner. The laws that dictate imperial rituals and succession need to catch up.

The Brink: Has the imperial family’s personal preferences for art influenced how they have been depicted through time?

The imperial family, since the rise of Japan’s warrior-led military governments, has exercised little to no political power. Instead, beginning in the 12th century, the imperial court oversaw rites and rituals and practiced the elegant arts. Imperial family members and Japanese nobility patronized artists and craftsmen who perpetuated classical styles and traditional methods. In the mid-1850s, the imperial family continued to act as patrons by purchasing new works of art that today are put on display at national art and industrial exhibitions. More recently, the imperial family continues to attend cultural events, host poetry readings, and make appearances at prize presentation ceremonies. However, since participating in these activities constitutes their official duties, the emperor and empress’ personal aesthetic preferences remain largely unknown to the public.

The Brink: Since the imperial family moved to Tokyo in 1868 under Emperor Meiji’s reign, how has their residence there influenced the city’s culture and architecture?

When the emperor moved from Kyoto to Tokyo, he took over the former shogun’s castle as his new palace, a move that was both symbolic and practical (the shogun was the leader of the ousted regime). Architecture in the city changed most immediately to accommodate new functions of diplomacy and trade with Western nations; it also changed to showcase Japan’s modernization and industrialization. The most representative project of the late 19th century associated with the imperial family would be the construction of the new imperial palace, which was finished in 1888, replacing the makeshift castle-turned-palace (which had burned down). The new palace was built to feature two distinct halves. The outer official section, built in European style, was used for ceremonies and meetings. The inner private section, built in Japanese style, was used for the imperial family’s residence. That sense of duality still lives on today in Japanese architecture, and also notably in Japanese dress and cuisine as well. People choose Western or Japanese style to match the occasion and function without having to permanently commit to just one or the other.

The Brink: In your recent book, Modern Kyoto, you pose this question: Can an imperial city survive, let alone thrive, without an emperor? What’s your take on that?

Imagine if the president of the United States suddenly left Washington, D.C., to settle in another major city, taking with him his family, cabinet, and the entire federal government. What would happen to the identity and civic life of the city that they left behind? This is roughly what Kyoto experienced with the loss of an emperor in residence, starting in 1868 when the emperor (and the entire imperial family) moved to Tokyo. My book starts with the large question of whether Kyoto could not only survive the loss but continue to function as an imperial city without him. The short answer is yes. But only because of a constellation of factors that aligned perfectly.

The Brink: What were those factors that set up Kyoto so well to hold on to its imperial lineage after the emperor and his family moved to Tokyo?

There are three factors that I mainly consider.

First, the persistence of important advocates. The local political, civic, economic, and religious leaders of Kyoto rallied tirelessly to keep the city running and relevant. Emperor Meiji himself and many of the nobility who left with him for Tokyo continued to work on behalf of the old capital while out in the new one. Meiji maintained a personal tie to his birthplace and eventually insisted on being buried there.

Second, Kyoto comprised a wealth of historic sites. Having served as the imperial capital since 794 CE, Kyoto boasted a great accumulation of sites, buildings, and objects affiliated with a long, continuous imperial line. The gardens, palaces, temples, and mausolea (and the artistic treasures collected inside) were sites of imperial memory that Kyoto’s advocates leveraged to keep the affiliation with the emperor’s reign alive. Preservation, management, and creative reuse of the sites—and the opening of many of them for the first time to domestic and international tourists—were key to sustaining their collective identity as imperial properties.

Third, the power of new construction. Few people are aware of the large-scale infrastructural, urban, and architectural developments in the modern period that bolstered the character of Kyoto as a historic capital. The building of a new canal for sourcing water and electricity, a comprehensive streetcar system, a main train station to connect to Tokyo and Osaka, and clusters of modern architecture for higher education and cultural institutions accentuated the existing urban configuration. Transportation was especially key for giving the public easy access to old and new sites of cultural-historic interest.