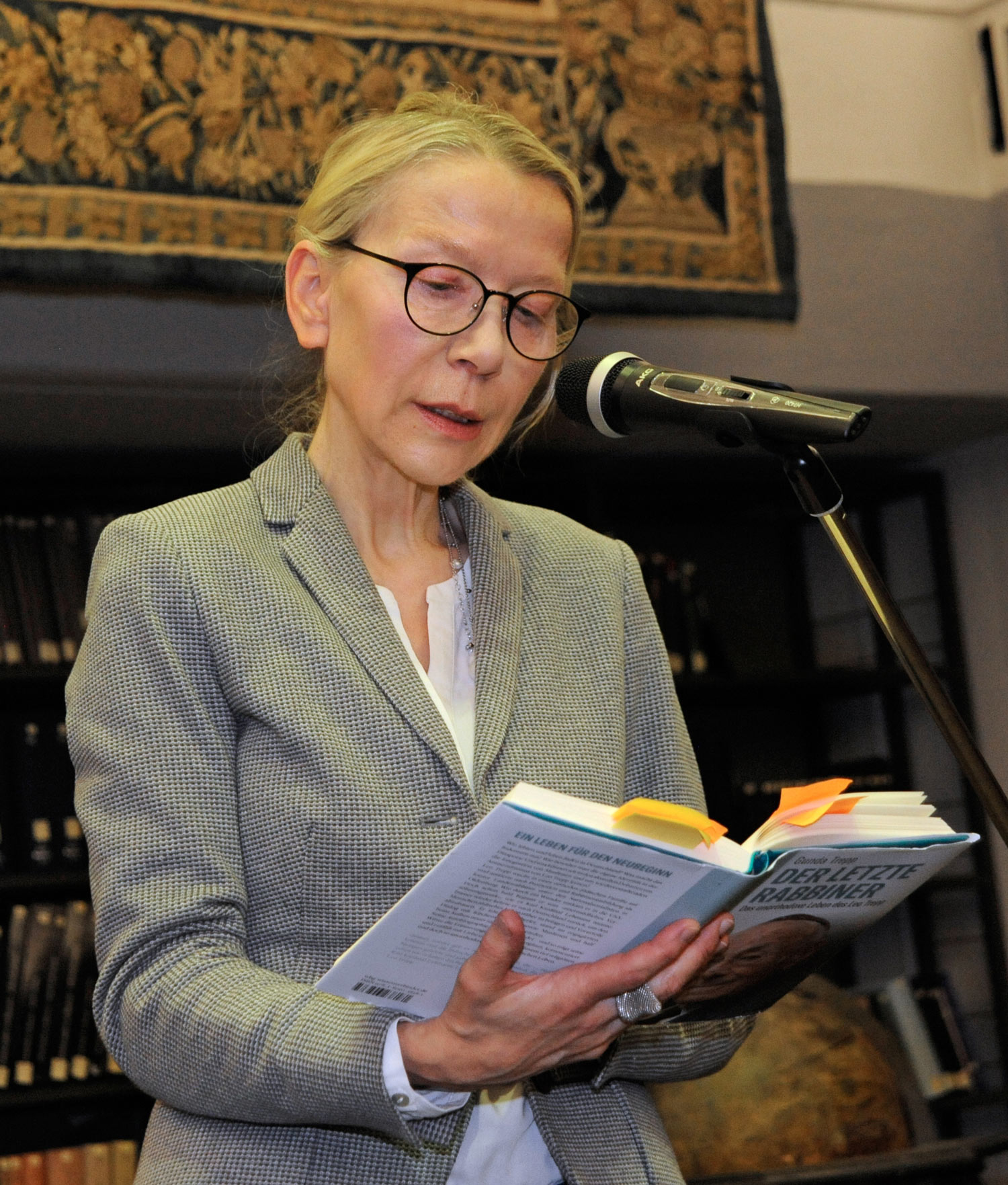 Reading this Wednesday will be journalist Gunda Trepp, who has selected a passage from her book about her late husband, German-American Rabbi Leo Trepp, the last surviving rabbi to lead a congregation in Nazi Germany during the early days of the Holocaust. Photo by Dvaas/Wikimedia Commons

BU’s Elie Wiesel Center for Jewish Studies is hosting a new virtual reading series this summer, featuring preeminent scholars, authors, and poets reading pieces that are especially meaningful to them at this moment in history. These half-hour events (1 to 1:30 pm), hosted by Michael Zank, Wiesel Center director and a College of Arts & Sciences professor of religion, will be held on Wednesday afternoons through the end of August. Zank will provide an introduction to each reader and facilitate the question and answer sessions.

Auschwitz survivor and Nobel Peace Prize laureate Wiesel (Hon’74), who died in 2016, spent his life bearing witness to the atrocities of the Holocaust and the six million Jews killed in Nazi concentration camps. He was BU’s Andrew W. Mellon Professor in the Humanities Emeritus and a CAS professor emeritus of philosophy and religion.

Reading this Wednesday will be journalist Gunda Trepp, who has selected a passage from her book about her late husband, German-American Rabbi Leo Trepp, the last surviving rabbi to lead a congregation in Nazi Germany during the early days of the Holocaust. Rabbi Trepp spent time in the Sachsenhausen concentration camp before immigrating to America and was an outspoken critic of ant-Semitism and racism. He died in 2010; four years later, his widow established the Leo Trepp Lectures at BU in his memory.

The Wiesel Center has an active group of supporters, and many of them normally attend its popular campus lectures and conferences. But since the coronavirus pandemic has made live events impossible, center staff decided to set up a new virtual reading series to bring people together while they have to stay apart.

“Now that these highly unusual circumstances are becoming a new normal, many people are feeling down and in need of inspiration,” Zank says. “We want this series to be an offering to our extended community. We invited our readers to select a text of their own or by someone else that speaks to them at this time. Chances are, it will speak to others as well.”

He describes the weekly online events as short, intimate conversations that will “help us to punctuate the week with something that should be pleasant, thought-provoking, and uplifting.”

The series kicked off on July 8 with Alicia Borinsky, a CAS professor of romance studies. On July 15, the reader was three-time US poet laureate Robert Pinsky, a William Fairfield Warren Distinguished Professor and CAS professor of English and director of the Creative Writing Program. Future readers are former NPR reporter Sonari Glinton (CAS’96), a former student of Wiesel’s, who will read from Eve Ewing’s book of poems 1919, as a commentary on the current moment in American race relations, on July 29. Wiesel’s son, Elisha, will read on August 5, followed by Pnina Lahav (GRS’83), a School of Law professor, on August 12, and Ariel Burger (UNI’08), who was a student of Wiesel’s and his teaching assistant at BU for five years and wrote a book about the experience and his teaching principles, on August 19. The series will conclude on August 26 with a reading by Nancy Harrowitz, a CAS professor of Italian and director of the center’s minor in holocaust, genocide, and human rights studies.

Zank says the reading series came together quickly and that he is excited about the lineup of readers, as it offers an opportunity to showcase the wide range of the center’s faculty, alumni, and friends. “Some of our readers have a close connection with Elie Wiesel, who passed away four years ago on July 2, so this is also a way of honoring our center’s namesake,” he says. “I hope we can continue this series in the future, as there are so many talented and thoughtful friends, colleagues, and students of the center we would love to host for this type of event.”

The Elie Wiesel Center Summer Reading Series is held  Wednesdays at 1 pm through August 26. Preregistration is required; do so here.