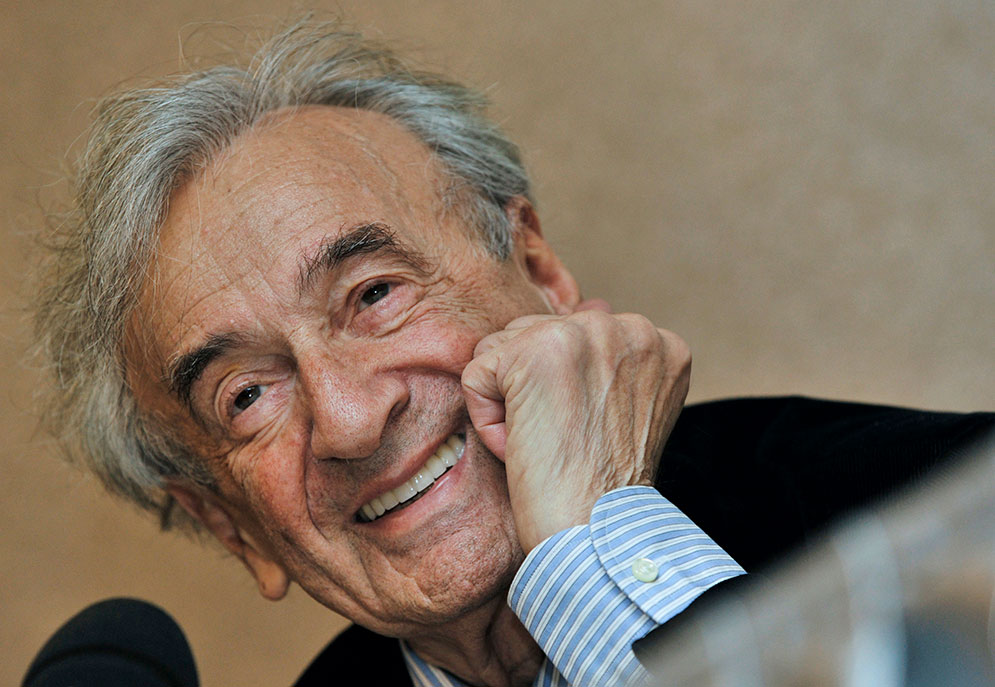 Boston University will honor the memory of Elie Wiesel, Auschwitz survivor, Nobel laureate, and influential teacher and lecturer, this Sunday with panel discussions and a celebration paying tribute to his legacy of peace and activism.

Wiesel (Hon.’74) dedicated his life to bearing witness to the atrocities of the Holocaust, fighting for the memory of the six million Jews and countless others killed in German concentration camps during World War II.

As a teacher and writer, the Andrew W. Mellon Professor Emeritus in the Humanities and College of Arts & Sciences professor emeritus of philosophy and religion made BU his intellectual home for nearly 40 years. He helped shaped the moral compass of innumerable BU students in classes and lectures that probed fundamental questions of good and evil, love and fanaticism.

In Memory of Elie Wiesel: A Day of Learning & Celebration will begin with a series of panel discussions about Wiesel’s teaching and writing at 9:30 a.m. at the Questrom School of Business. Panelists include Cornell William Brooks (STH’87, Hon.’15), former president of the National Association for the Advancement of Colored People, who studied with Wiesel at BU, Sharon Portnoff, Elie Wiesel Professor of Judaic Studies at Connecticut College, and National Public Radio business reporter Sonari Glinton, another of Wiesel’s BU students.

After lunch, the memorial will continue at the George Sherman Union Metcalf Hall, where for decades Wiesel gave his annual fall lecture series to overflow crowds, with an event titled Celebration in Word, Image & Song. University officials, colleagues, students, and friends, as well as Wiesel’s son, Elisha, will speak, and the HaZamir Chamber Choir and BU’s Inner Strength Gospel Choir will perform. The public is welcome to attend.

The celebration was planned to coincide with Alumni Weekend 2017 to give Wiesel’s former students the chance to participate. All events are free, but registration is requested.

“It fell to Elie Wiesel—because of his own tragic experience—to grasp opportunities to bear witness and remind us never to turn our backs on the past,” says Robert A. Brown, president of BU. “He was a witness to history out of a deep sense of duty. He was a great teacher because of his early immersion in, and love of, the sacred texts. We are proud to have been his teaching home and to be the curators of his legacy at the Gotlieb Center. “

His students, who came from a variety of faiths and backgrounds, also remember the courses taught in his office on Bay State Road. Wiesel, a Hasid, often read stories from the Torah in a resonant but soft-spoken voice, using themes from the material as a springboard for broad discussion.

Ingrid E. Anderson (GRS ’05,’14), associate director of the Elie Wiesel Center for Jewish Studies and an Arts & Sciences Writing Program lecturer, had never heard of Wiesel when she came to BU as a student more than a decade ago. But after taking one of his courses, she says, she became riveted not only by his message, but by the way he encouraged students to think and draw their own conclusions from class discussions.

“He had a style of teaching which was very personal, very emotionally driven,” says Anderson. “For him, education was really about ethics. It was about literature, and for him the best literature always had an ethical or moral message.”

Activist and former student Brooks, now a School of Theology and School of Law visiting professor of social ethics, law, and justice movements, took Wiesel’s Literature and Memory course in the 1980s and could feel his teacher’s quiet fervor in his lessons. Brooks says Wiesel, who was no longer a young man, cautioned his students against getting comfortable, and he seemed to live by those words.

Born in Romania in 1928, Wiesel and his family were deported during World War II to German concentration camps, where his parents and younger sister died. He and his two older sisters survived, liberated from Buchenwald by Allied troops in 1945. Wiesel, 16 years old at the time, was taken to Paris, where he later studied at the Sorbonne and worked as a journalist. At the age of 30, he published his first book, La Nuit, a memoir of his experiences in the concentration camps. The English version, Night, was published two years later. It remains required reading in many classrooms and continues to be an international best seller.

Wiesel went on to write more than 40 books, most of them memoirs and novels that explored what he called “history’s worst crime.” And although it was the Holocaust that haunted him, he became a spokesman for human rights wherever they were threatened globally. He received the Nobel Peace Prize in 1986.

Janet McCord (GRS’95), a Marian University professor of thanatology (the study of grief, dying, and loss), says she attended her first Wiesel lecture in the 1970s and it changed the course of her life. She enrolled at BU, becoming one of Wiesel’s teaching assistants while earning a PhD in philosophy. Under Wiesel’s direct supervision, and at his urging, she wrote her dissertation about the lives and works of Holocaust survivors who became writers after the war and then died by suicide.

This fall she is teaching an elective called Death and the Literary Imagination, which is “100 percent inspired by Elie Wiesel and the courses he taught at BU,” she says.

“His teaching was transformational,” says McCord, one of Sunday’s panelists. “He handed the torch to us all, never teaching us what to think. He taught us how to think, and especially how to ask questions.”

Former students say that Wiesel called learning a quest for the “timeless lessons that generations of teachers and students have left us as precious gifts.” He was also a visiting scholar at Yale University and a Distinguished Professor of Judaic Studies at the City College of New York, and he served on numerous boards of trustees and advisors. He received more than 100 honorary degrees from institutions of higher learning, as well as the Presidential Medal of Freedom, the US Congressional Gold Medal, and the National Humanities Medal.

With his wife, Marion Wiesel (Hon.’90), he established the Elie Wiesel Foundation for Humanity, with the mission of combating indifference, intolerance, and injustice through programming and dialogue. The foundation’s conferences have brought together Nobel laureates and world leaders to discuss social problems and avenues for change.

Yet despite his influential rise, Wiesel never shied away from speaking about injustice when he saw it. He offered a memorable rebuke to President Ronald Reagan for a planned visit to an SS cemetery in Bitburg, Germany, in 1985. And he confronted President Bill Clinton with the need for US intervention to prevent a genocide in Kosovo and the Balkans in the 1990s and raised difficult questions about the failure of the United States to stop a genocide in Rwanda.

Michael Zank, director of the Elie Wiesel Center for Jewish Studies and a CAS professor of religion, will moderate one of the Sunday panels. He says the daylong tribute is a chance to remember Wiesel as a teacher and “an extraordinary personality who influenced generations of BU students.”

Zank says that the day “is not going to be nostalgic. It’s not just focused on the past, but on how we imagine his legacy going forward.”

And, he adds, “It’s up to us to figure out what that means.”

The Elie Wiesel Day of Learning & Celebration is being held at BU Sunday, September 17, 2017. Find a complete schedule of events here. Registration is requested for all events, which are free and open to the public. The panel discussions start at 9:30 a.m. at the Questrom School of Business, Rafik B. Hariri Building, Room 105, 595 Commonwealth Ave. Marsh Chapel is at 735 Commonwealth Ave. The celebration begins at 2:30 p.m. at the George Sherman Union Metcalf Hall, 771 Commonwealth Ave. The Howard Gotlieb Archival Research Center is in the GSU.