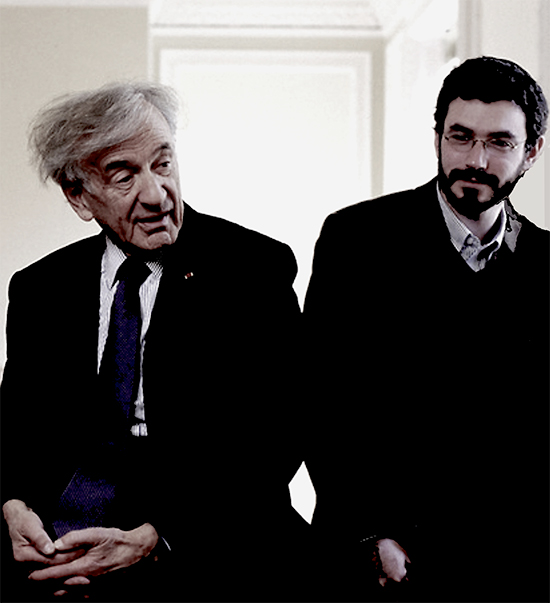 Two days after the mass murder at the Tree of Life synagogue in Pittsburgh October 27, Ariel Burger was in a reflective mood when he picked up the phone to discuss his friend and mentor, the late Nobel Laureate Elie Wiesel (Hon.’74).

“It would have been a good time to have his voice here,” Burger (UNI’08) said softly. “He would have said we have to find a way to turn our grief and our sadness into hopeful compassion, and to make the link from our own particularly Jewish sadness and grief to the sadness and grief experienced by other communities.

“The African American community also experienced a shooting last week. And there’s a link between hatreds. We have to honor our dead and honor the living and do that across communities to support each other in really difficult times.”

Wiesel, BU’s Andrew W. Mellon Professor Emeritus in the Humanities and a College of Arts & Sciences professor emeritus of philosophy and religion, taught at BU for nearly four decades, beginning in 1976. He died in 2016 at age 87. A survivor of Auschwitz and Buchenwald as a teenager, he was best known for his work as a peace activist and “a messenger to mankind,” for which he was awarded the Nobel Peace Prize in 1986, and as the author of Night, an acclaimed autobiographical novel about the Holocaust.

Although he and Wiesel were acquainted for years, Witness sprung from the five years Burger served as Wiesel’s teaching assistant, from fall 2003 to spring 2008. The book looks deeply into questions of how to live and how to react to evil in the world, a compelling read that feels particularly important amid the terror and tragedy of the synagogue massacre and the escalating political rhetoric.

“If we’re dealing with issues of fake news or an immigration crisis or an anti-Semitic attack in Pittsburgh, where should we look to find the wisdom we need?” Burger asks. “Where do we find the clarity, the courage that we need, the practical advice as well as the inspiration that can help us act in ways that will make life better today?”

The book focuses on one of the central principles of Wiesel’s life and teaching: that great books, great philosophers, great literature—the big, enduring questions—can help us with the urgencies of day-to-day living. Burger says that was “a central design principle” of Wiesel’s educational approach.

He says that Albert Camus once wrote about a philosopher who spent two years researching the Dreyfus affair, a French political scandal of the late 19th century, so he could be sure he had found the truth of the matter. “But nowadays,” Camus wrote, “people make up their minds based on a single article.”

“Well, now we make up our minds based on a single tweet,” Burger says with a laugh. “We need to slow down and deepen our thought processes. And I think that’s one of the things Professor Wiesel taught us, to go deeper into the literature, into questions that have lasted for hundreds of years. That’s an important resource for us in times of trouble.”

The book tackles questions of memory and forgetting, faith and doubt, hope and despair, invoking the Talmud often, but also Kierkegaard and Kafka and countless others. It always comes back to Wiesel and his idea of the importance of bearing witness. “Listening to a witness makes you a witness” is the Wiesel quote that opens the first chapter.

Also central is the importance of learning. “He saw the simple act of transmission from teacher to student as a source of hope as the world continued to struggle with itself,” Burger writes. And in fact, the teenage Wiesel’s first move to resume his life after he was liberated from the concentration camp was to pick up his Torah studies on the page where he had left off before he was deported from Romania.

In the classroom, Wiesel could be light and joyous, and he was always focused on his students, an eclectic group in age and background, over the years including descendants of both Holocaust survivors and SS officers. “When a young student from Germany talked about wrestling with the legacy of her nation’s past, and a 75-year-old American student talked about feelings of guilt about American inaction during World War II, it made for the kind of dialogue that you couldn’t find anywhere else,” Burger says.

Witness also lays out the closeness of the friendship between the two men. Burger’s stepfather knew Wiesel in New York, and they first met when Burger was 15. They talked many times over the years, including in Israel while Burger was studying there, before he became Wiesel’s teaching assistant at BU.

Even now, Burger always refers to him as “Professor Wiesel” or occasionally “Elie Wiesel,” never just the first name. “It started as a formality, and it was the way I was raised—to always speak with deepest respect to teachers, and especially to one’s primary teacher. Over time it became an expression of intimacy and didn’t feel formal anymore. I never called or would call him ‘Elie.’”

Burger was ordained an Orthodox rabbi, and outside of the book, his work now focuses on workshops, where he uses storytelling and other exercises to promote social change, in the Jewish community and outside it.

He wrote most of Witness in the year after Wiesel’s death—on July 2, 2016, in New York City—the year that is also the most focused period of mourning in the Jewish tradition. “Writing the book was a lot,” Burger says with a sigh. “It was a complex experience. I experienced a lot of grieving through the writing process, but I would say that for every ounce of grief there was an ounce and a half of gratitude.”

Reviewing classroom notes and journals from those five years, he saw just how generous Wiesel had been with him and his fellow students, and he felt a mixture of sadness and joy.

“There were moments when I wrote a section—especially the last chapter, which recounts our final meeting, three weeks before his death—and I felt emotionally drained, as if I had been crying for hours,” Burger says. “Other times, I felt completely energized, with my curiosity fired up about a question I hadn’t thought about for years. I certainly felt profoundly that I was learning.

“I still feel I am learning things from him all the time.”

Ariel Burger will read from and discuss his new book, Witness: Lessons from Elie Wiesel’s Classroom, at Brookline Booksmith, 279 Harvard St., Brookline, on Tuesday, November 13, at 7 pm. The event is free and open to the public.

Part three of the 2018 Elie Wiesel lecture series, “Lessons from the Past: From Kristallnacht to the Modern Refugee Crisis,” with Mark Hetfield, president and CEO of HIAS, is on Monday, November 12, at 7 pm at the School of Law Auditorium, 765 Comm Ave.

The event is free and open to the public.

Witness to Lessons of Elie Wiesel

There are 2 comments on Witness to Lessons of Elie Wiesel