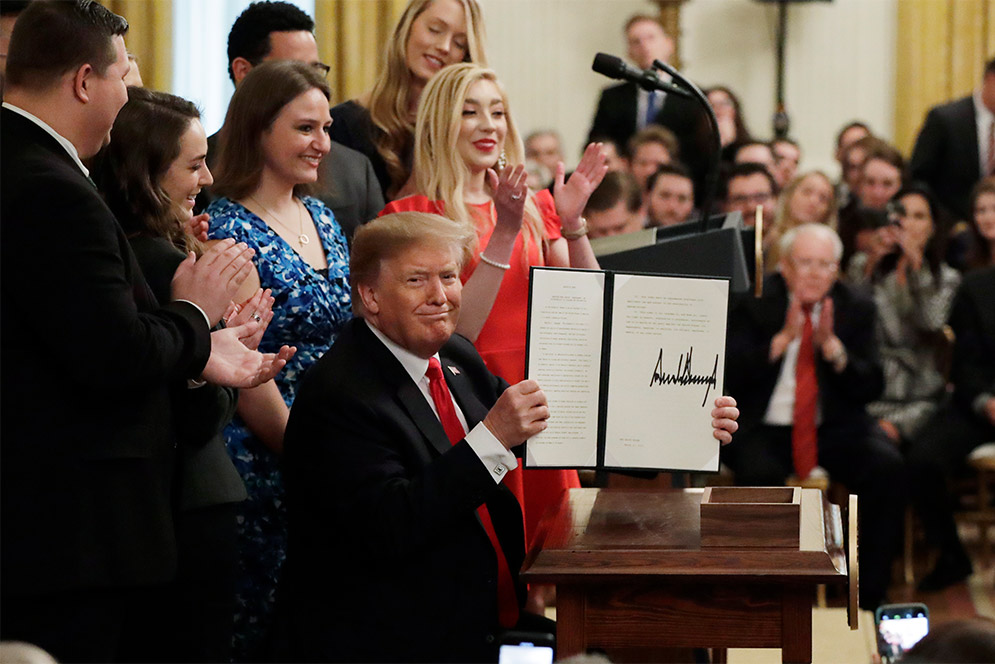 President Donald Trump after signing an executive order on “improving free inquiry, transparency, and accountability on campus” in the East Room of the White House on March 21, 2019. AP Photo/Evan Vucci

President Trump issued an executive order on Thursday saying universities that fail to certify their support for free speech on campus—something they already are supposed to do—would risk losing federal research dollars. The announcement immediately raised questions about how those restrictions would be implemented.

Trump’s order did not specify aid cuts for any particular speech policies or outline how the plan will be enforced, other than to say details will emerge in the next few months. Rather, it declared it federal policy to “encourage institutions to foster environments that promote open, intellectually engaging, and diverse debate, including through compliance with the First Amendment for public institutions and compliance with stated institutional policies regarding freedom of speech for private institutions.”

Public universities would have to formally agree to adhere to the First Amendment, which they are already required to do, while private universities, like BU, have greater flexibility in crafting their own free speech policies and would be required to commit to their own institutional language on the subject.

The issue of free speech on campus was already top of mind for Robert A. Brown, president of BU, before Trump disclosed his order. Brown had created two committees to review the University’s speech protections, with an eye toward recommending possible improvements, after speech-related problems surfaced in academia generally.

One committee, cochaired by Jean Morrison, University provost, and Erika Geetter, vice president, general counsel, and secretary of the BU Board of Trustees, will draft a description and affirmation of BU’s commitment to freedom of expression. The second committee, cochaired by associate general counsel Rebecca Ginzburg (LAW’04) and Kenneth Elmore (Wheelock’87), associate provost and dean of students, will explore revisions to existing policies.

“Colleges and universities across the country have been engaged in conversations about free speech for decades,” Morrison says. “Although specific policies may vary by institution, there is broad consensus within higher education that freedom of speech is core to the educational mission and must be protected.

“I believe you can see this commitment to free speech in the actions of universities across the country,” she says, “including BU.”

It’s an issue of critical importance to universities because the government provides research funding as well as aid to financially needy students. BU received about $317 million last year in research funding alone.

Trump signed the order in the White House East Room, flanked by Christian and anti-abortion college students, who recounted stories of being cursed, restricted to free-speech zones, or intimidated by college administrators. Trump said the students had encountered “ideological intolerance on campus” after trying to distribute items from religious valentines to crosses representing aborted fetuses.

“Taxpayer dollars should not subsidize anti–First Amendment institutions,” the president said, saying the government distributes $35 billion in research aid nationally. “All of that money is now at stake.”

Trump’s order went beyond the matter of free speech. It also said the Department of Education will update its College Scorecard website to provide students and their families with data showing the different “returns on their investment” from different higher education institutions, such as loan debt and default rates and median earnings of graduates.

Reaction from several BU students to the idea of government intervention in campus speech policy was mixed. Freshman Regina Acosta (CAS) calls the order “a step in the right direction,” given her recent experience publicizing an antiabortion speech at Boston College among her BU peers.

After posting the news on the Class of 2022’s Facebook page, she says, “within minutes, I received comments, including one aggressively ‘unwelcoming’ me from posting about pro-life points of view.

“If students don’t feel safe about being vocal about their beliefs, the government should take some action to protect free speech rights that other students enjoy without as much consequence or backlash,” Acosta says.

But senior Anna Stroinski (CAS), president of BU College Democrats, considers Trump’s order “grandstanding.” Free speech already is protected by law, she says, and “you also have to look at who Trump thinks he’s helping with the order. Is it a student arrested at a public university for handing out copies of the constitution in Spanish,” as happened at California’s Pierce College last year? “Or is it conservative pro-lifers at a student activities fair? The Trump [Justice Department] has been historically selective with the free speech cases it intervenes in.”

Sophomore Sean McDonald (ENG), communications director for BU College Republicans, says his group is “very pleased with this executive order and feels it is necessary, given the current state of conservative dialogue on campuses across the nation.…We are shocked that this has become a partisan issue.”

Mary Sue Coleman, president of the Association of American Universities, which BU belongs to, calls the order “a solution in search of a problem. The free and open exchange of ideas and information is already a fundamental cornerstone of the educational mission of America’s leading research universities.”

A number of incidents in recent years has put the issue of free speech on campuses under a spotlight. A Middlebury College professor was roughed up and hospitalized in 2017 after she and scholar Charles Murray were shouted off a stage during a talk by the conservative theorist of racial differences in IQ. Christian Hoff Sommers, a critic of feminism, was repeatedly interrupted by protesters last year during a speech at Lewis & Clark Law School in Oregon.

Undergirding these disruptions, according to a 2017 survey, is the belief among one fifth of undergraduates that it’s OK to use violence to silence a speaker who is “known for making offensive and hurtful statements.”