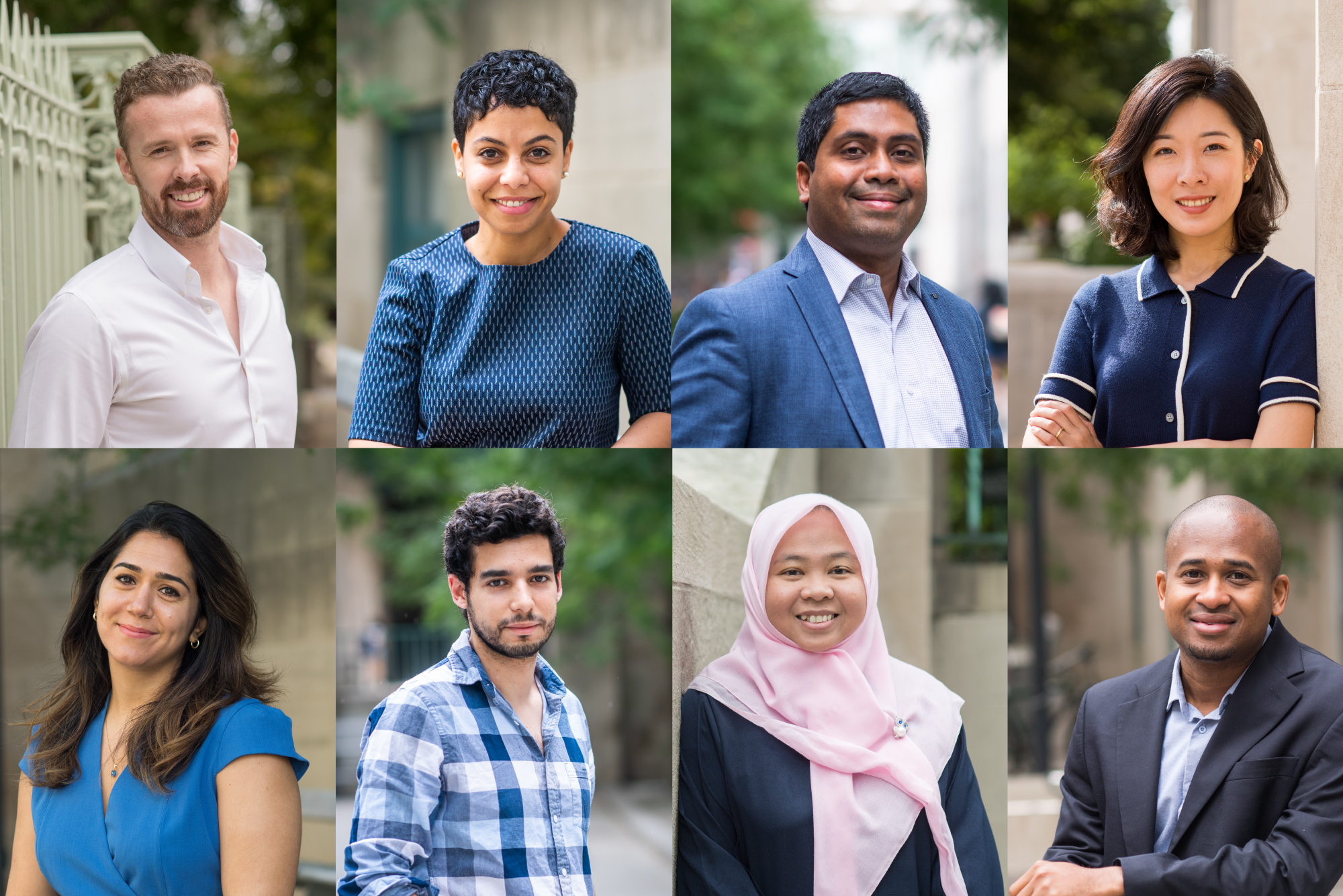 This year’s eight winners span a range of disciplines

Studying refugees in the Trump era’s political climate is, as Heba Gowayed diplomatically puts it, “suboptimal.” So the first-ever longitudinal survey she plans to do, which would take years in the best of times—measuring how easily refugees master English, find a decent job, and gain a fundamental sense of security and belonging—remains an aspiration for now.

Meanwhile, the College of Arts & Sciences assistant professor of sociology has conducted plenty of other research that has won her one of this year’s eight Career Development Professorships, awarded to promising junior faculty.

Gowayed has a contract for a book that will take an up-close look at Syrian refugees resettled or granted asylum in the United States, Canada, and Germany, comparing their access to resources under these different systems. “I argue that human capital can be created, transformed, or destroyed by national incorporation policies,” Gowayed says. “My overarching goal as a researcher is to document the lives of people whose experiences are underrepresented in academic work, [using] a method by which the researcher immerses herself in others’ social worlds.”

Career Professorships, variously named for the donors and alumni who fund them, are awarded annually from among those nominated by their deans and colleagues as promising scholars in their fields. Most of the professorships are tied to specific BU schools; all are for three years and provide stipends for the recipients’ salaries and scholarship.

Gowayed has been named a Moorman-Simon Interdisciplinary Career Development Professor, “a tremendous opportunity that I am truly grateful for,” she says. “It provides me with the resources and encouragement to begin work on my next project. The funds offered…enable a multinational project and will enable me to involve students at Boston University to support me in what will be an important learning experience for us all.”

“I was expecting to find that employers varied in how negatively they interpreted a job applicant’s criminal record, and that this variation was related to their neighborhood crime level,” she says. To her surprise, she discovered that while working near recent violent crime cut the likelihood of blacks getting a callback, that happened regardless of whether they had a criminal record or not. She didn’t find the same bias in white and Hispanic callback rates.

Addressing that bias, she says, “is a difficult problem to solve, and it remains an open question for researchers” who are looking at such things as hirers being open to their bias, and intentionally blinding themselves to race on applications. Whatever the answer, her new professorship will help her with workplace-interactions data she’s been collecting, ensuring “much faster progress on building and analyzing these new data sets because I’ll be able to hire a few team members.”

On the natural sciences front, Florian Douam, a School of Medicine assistant professor of microbiology, will use his Peter Paul Career Development Professorship to advance an innovation that will strike nonexpert ears as science fiction: humanized mice.

Those are mice “engrafted with human tissues,” enabling research into human diseases that would normally be hard-pressed for subjects, says Douam, an investigator at the National Emerging Infectious Diseases Laboratories (NEIDL) studying virus threats such as yellow fever, Zika, and dengue. Using these mice, his lab will “explore at an unprecedented resolution, over time and in multiple tissues, how the human immune system mobilizes during an infection,” he says. (He made major progress on yellow fever research as a postdoc at Princeton using this tool.)

The Peter Paul Professorship, Douam says, “is going to provide me with instrumental resources that will allow me to move my research program forward better and faster.”

These are the other Career Development appointees:

Chandramouli Chandrasekaran, a MED assistant professor of anatomy and neurobiology and a CAS assistant professor of psychological and brain sciences, is now a Moorman-Simon  Interdisciplinary Career Development Professor. Chandrasekaran studies monkeys to find the neural basis of decision-making and cognition, a complement to others’ research into human cognition. His work combines diverse tools, from electrodes and imaging to statistical techniques.

Anne Feng, a CAS assistant professor of Chinese art, has been chosen an East Asia Studies Career Development Professor. A scholar of Buddhist art and architecture, among other topics, Feng is an expert on the Dunhuang caves in western China, repositories of ancient art first dug out in the fourth century. Her University of Chicago dissertation dealt with water imagery in the wall paintings there. She is currently preparing a monograph that explores the impact of an aquatic imaginary on the pictorial programming and immersive architectural schemes of Buddhist cave sites on the Silk Road.

Dennis Jones, a MED assistant professor of pathology and laboratory medicine, has been named a Ralph Edwards Career Development Professor. Recruited to BU to develop a program studying lymphatic development in cancer and infections, Jones was a lead investigator on research while a Yale PhD candidate and a postdoc at Massachusetts General Hospital. He also has focused on mentoring undergraduates, especially in teaching.

Robert Metcalfe, a Questrom assistant professor of markets, public policy, and law, is the latest Reidy Family Career Development Professor. A behavioral economist, Metcalfe uses extensive data sets to help large companies address managerial problems, from health to the environment to digital matters. One recent article he authored studied hundreds of airline captains across 40,000 flights and found that if they knew their fuel efficiency was being monitored, they improved in that area, which lowered carbon dioxide emissions.

Derry Wijaya, a CAS assistant professor of computer science, is this year’s University Provost’s Professor. An expert on machine learning, Wijaya researches automatic translation between languages that don’t have vast, transcribed passages (Uzbek to Samoan, in an example cited in her nomination for the professorship). She also evangelizes for computer science to middle school girls and low-income students with the aim of diversifying those working in the field.

“Key to any research institution’s vitality and long-term health is an energized and talented class of rising faculty,” says Jean Morrison, University provost. “BU is proud to employ some of the very best emerging educators and researchers in the world across dozens of disciplines and to invest in their growth and success with career development professorships. This year’s cohort is no exception. From medicine and public health to science, technology, business, and the humanities, all are making tremendous early impact in their fields, and we are excited to see what the future holds for them.”