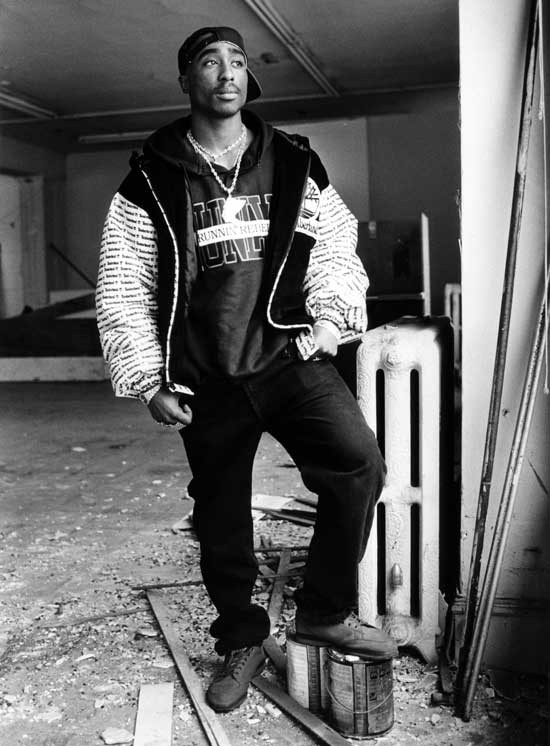 Tupac Shakur, the Harlem-born son of Black Panthers, had seen “inner-city realities that are top-down political issues that oppress his people.…And he critiques that, song after song after song,” says STH’s Barbod Salimi. Photo by MediaNews Group/Bay Area News via Getty Images

The street vulgarities of Tupac Shakur’s “Starin’ Through My Rear View” don’t evoke descriptors like “spiritual” or “theological.”

But Barbod Salimi, a School of Theology assistant professor of philosophical psychology, has asked his students to pinpoint those qualities in the late rapper’s song, and their answers show that the words of the prophets aren’t written only on the subway walls; they’re in song lyrics as well. His class, The Prophetic Witness of Tupac Shakur, relies on a syllabus that’s heard as well as read, the former pouring out of two speakers wired to Salimi’s laptop; the course posits Tupac—everyone in class calls him that—as more than one of hip-hop’s all-time maestros.

Senior Denise-Nicole Stone (CAS) heard the early verses as “a critique on callousness…why nobody cares about the murder of a child.” But the tone of the final verses, when Shakur says, “the world is game to be played/it’s all about the papers, money rule the world,” is “extremely callous.… I think he’s kind of telling on himself, [that] he’s not all the way there” to compassion.

Master’s student Sharrice Autry (STH) also found the U-turn jarring. While “there was something very spiritual about the song,” with the rearview-mirror metaphor implying “this sense that you’re not long for the world, you’ve accomplished these things,” the ending “switches in another direction, and is talking about, do what you want to do.”

Salimi suggests perhaps the circle can be squared by recognizing that humans are neither all compassion nor all callousness, but a psychic casserole of both. “To perceive others through those polarities, I think, is a betrayal of human psychology,” he says. “We’re not that simple.”

Shakur was murdered at age 25 in an unsolved 1996 shooting, but Salimi believes his music is just as relevant today as it was a quarter century ago. A Shakur fan since childhood, he’s teaching the class for the third year. It drew more than a dozen students of multiple races, with more women than men. Salimi says the rapper foresaw social problems, such as how the war on drugs would lead to mass incarceration of blacks and continued discrimination, years before other commentators.

“Nobody heard [his warning] ’cause he’s a rapper,” Salimi says. “That’s what I’m aiming for in this course, to actually legitimize this as an art form, as a poetic…and ultimately as an intellectual and ethical critique of unjust systems.” By exposing students to this music, he hopes to spark civil, non-knee-jerk conversations about race and patriarchy “that don’t get had enough in our society and within universities.”

He says he knew the course title “would have controversial implications to it, based on the eye of the beholder.” If it sounds like he’s comparing the singer to the biblical prophets, well, he suggests, consider what Jesus and his Hebrew Bible predecessors did: “Nine times out of ten, it’s a political, visionary corrective to a particular society.… People say prophecy means you predict the future, and that’s partly true. But it’s not a crystal ball–Nostradamus type. It’s actually diagnostic.”

Prophets call out a social ill and summon people to heed the better angels of their nature, via concrete steps rather than airy abstraction. Salimi offers as an example Matthew’s gospel story of the rich man who asks Jesus how he can inherit the kingdom of God.

Jesus cites the Mosaic law: love God and your neighbor. Been there, done that, the man confidently replies. Then Jesus adds a specific act: “Go and sell all your possessions and give the money to the poor, and you will have treasure in heaven.” The man leaves downcast at having to fork over his wealth.

Similarly, Salimi says, Shakur, the Harlem-born son of Black Panthers, had seen “inner-city realities that are top-down political issues that oppress his people.… And he critiques that, song after song after song.” But as “Starin’ Through My Rear View” shows, he also “critiques black youth” for self-destructive behavior “and calls them to a better way forward.” (Besides Shakur’s songs, the syllabus includes traditional unsung readings, including analyses of the rapper’s enduring appeal by the likes of celebrated Georgetown University sociologist Michael Eric Dyson.)

There’s a fraught piece of Shakur’s brief life that can’t be ducked in the #MeToo era. He was convicted and served time for sexual abuse, while always maintaining his innocence. Given the historic criticism of rap for misogyny, Salimi says, the course examines several songs involving gender and anti-women themes. Again, the message can seem contradictory.

“Wonda Why They Call U Bitch” condemns the titular woman’s promiscuity. Yet in “I Get Around,” Shakur boasts about being a sexual player himself. Hypocrisy? The class ponders that, and whether “Wonda” is an exercise in victim-blaming—whether the woman is forced into her lifestyle by the circumstances of her male-dominated world.

That debate—which hasn’t broken down along gender lines since he’s offered the course, Salimi says—has seen some students side with the rapper, who famously wrote in his hit “In My Heart”: “Through every dark night, there’s a bright day after that. So no matter how hard it get, stick your chest out, keep your head up, and handle it.”

A Class That Explores the Gospel According to Tupac Shakur

A Class That Explores the Gospel According to Tupac Shakur
One Class, One Day
2
share this