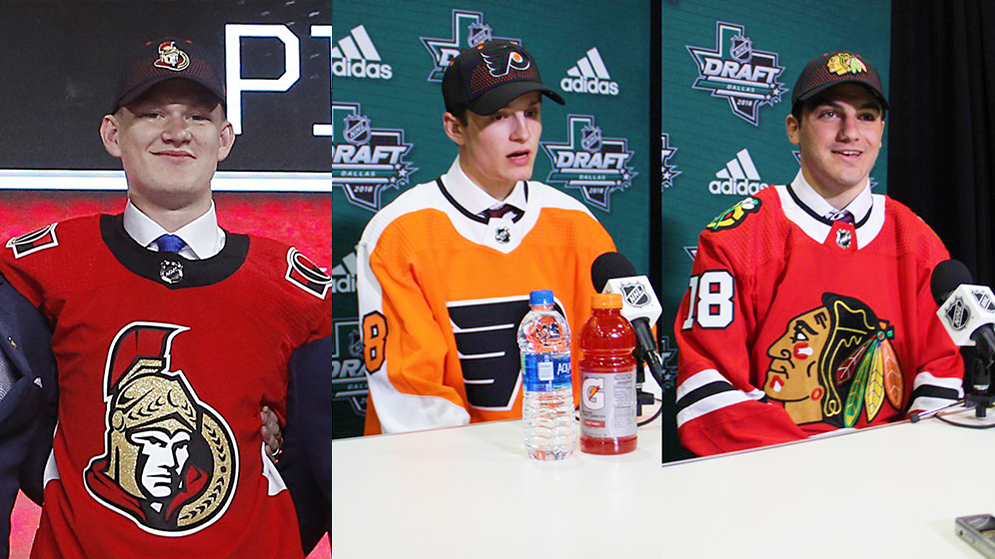 Expect to see even more Terrier names on the back of NHL jerseys in the near future. This weekend, three members of the BU men’s hockey team were picked as possible future professional hockey players in the NHL draft. BU was the only NCAA school to have two players snatched up in the first round of the draft.

Forward Brady Tkachuk (CGS’19) was the first American taken Friday night, going fourth overall to the Ottawa Senators. The Philadelphia Flyers took incoming freshman forward Joel Farabee (CGS’20) with their first round 14th-place pick, and fellow freshman and center Jake Wise (CGS’20) was picked up by the Chicago Blackhawks in the third round, 69th overall.

Last year, BU reached the NCAA quarterfinals. The Terriers will enter the upcoming season as the defending Hockey East champion and with a new coach at the helm. Albie O’Connell (CAS’99), who had been the Terrier associate head coach since 2014, was named to replace David Quinn (CAS’89) last month when he announced he was leaving BU to take over as head coach of the New York Rangers.

“We always strive to recruit the best of the best, and the NHL draft—especially in recent years—has been a great weekend to celebrate the elite student-athletes that we’ve been able to attract,” O’Connell says. “These young men choose BU because they want to get a top-notch education and compete at the highest level of college hockey while developing into NHL-ready players.”

During his freshman year, Tkachuk led the team in assists (23) and shots (131) and finished fourth in points. He won a bronze medal with Team USA at the 2018 World Juniors and played on the Hockey East All-Rookie Team.

Tkachuk is the son of NHL legend Keith Tkachuk (CAS’96), who skated for the Winnipeg Jets, the St. Louis Blues, and other teams. They are the first father-son team to both play in the NCAA and to be NHL first-round picks. The only Terriers ever selected higher in the NHL draft were Rick DiPietro (CAS’01), who went first overall in 2000, and Hobey Baker Award–winner Jack Eichel, who played for BU during the 2014–2015 season and was the second overall pick in 2015. Scott Lachance (CAS’94) was also picked fourth overall in 1991.

During a press conference after last weekend’s draft, Tkachuk was asked what it was about BU that had prepared him the most for playing professionally. “The team we had—we had a great team,” he said. “It was always competitive practices working against each other. We had a great group of guys. [You were] playing against big, strong defense. You have to use your brain more in battles instead of trying to outmuscle them because they are pretty strong guys.”

Farabee, a forward from Cicero, N.Y., previously skated with the USA Hockey’s National Team Development Program. He was captain of the US Under-18 Team last year and finished second in goals (33), assists (43), and points (76) in 62 games. He was on the gold medal-winning Team USA at the 2017 Under-18 World Championship, where he scored two goals in the gold-medal game.

When interviewed after the draft, he was asked why he wanted to come to BU. “I like the coaches and how they develop,” said Farabee, whose father grew up in Philadelphia and has always been a big fan of the BU team. “For me, as a lighter guy [162 pounds], it’s just the perfect place to play.”

Also coming from the National Team Development Program is Wise, who dished out 9 goals and 19 assists in 18 games. The team captured a silver medal at this year’s U-18 World Championship. Wise grew up in nearby North Andover and previously played at Central Catholic High School.

“I’m excited to get [the season at BU] going,” Wise told reporters last weekend, sporting a Blackhawks jersey. “The NHL draft has been a dream of mine since I was a kid. It’s crazy, crazy I just got picked.”