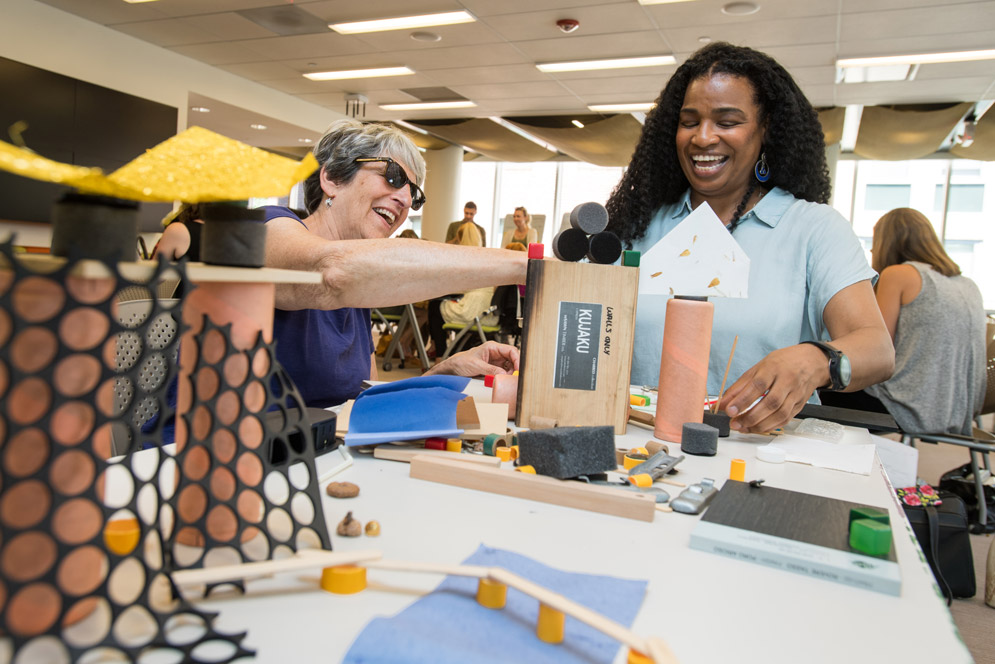 On a recent summer morning, a roomful of preschool teachers from across Massachusetts are at tables, playing with makeshift items like popsicle sticks, colorful sponges, shiny metal gaskets, and recycled materials and using them to create cities, bridges, and whimsical sculptures.

The brief exercise is part of a workshop at Boston University Wheelock College of Education & Human Development to help early childhood educators learn new ways to encourage play and the principles of Reggio Emilia, an educational philosophy originated in the northern Italian city, where children play in sun-filled public preschool ateliers.

“Learning is social and inspired by doing,” says workshop leader David Ramsey, a Boston Public Schools Early Childhood program director. “It’s fun, there’s a lot of laughs when children play, but cognitive development is at the core of everything here.”

The workshop is one of more than a dozen forums tied to the traveling exhibition The Wonder of Learning: The Hundred Languages of Children, which is on display at BU’s Fenway Campus from June through November 15.

Hosted by BU, the exhibition is organized by the Boston Area Reggio Inspired Network (BARIN), a group of early childhood educators who want to spread the word about the renowned Italian preschool educational project and its much-imitated approach to learning and to support the professional growth and development of educators interested in it.

Organizers hope the road show will draw as many as 20,000 educators from across the region to view the self-guided exhibition, as well as participate in workshops and forums focused on the state of early childhood education in the United States. 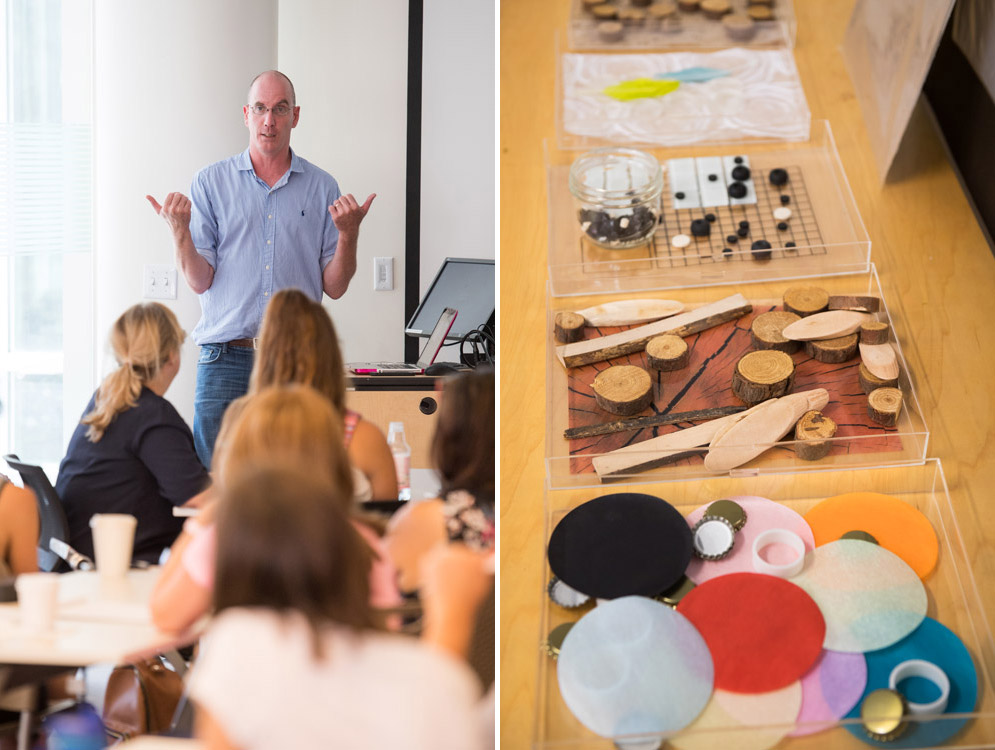 “To have this traveling exhibition that very few cities in America have is very important to bringing attention to the needs of young children,” Chard says. “We also want to draw in policymakers and the general public to get beyond lip service about the importance of early childhood education and talk about the more serious needs of the field.”

Those needs are significant. The wages of early childhood educators are often so low that they qualify for public assistance to help support their own families, according to a 2016 U.S. Department of Education report, which found that teachers in the field—nearly entirely women—typically earn less than tree trimmers and hairdressers. And although some of the most critical years for brain development are from birth to age five, the field has difficulty attracting and retaining experienced, well-educated staff.

“As our understanding of children advances and practices evolve in the field,” Chard says, “teachers may have no access to professional development, and the children they serve are unable to benefit.”

The Wonder of Learning seeks to fill that void by showing in a detailed but accessible way what can be accomplished using the Reggio approach.

Teachers at the recent morning workshop say they came to learn new ways to draw young people into creative activities and when to step in to help when children are trying to solve a problem on their own.

Ramsey says such skills are key. His PhD research found that children who engage in “critical symbolic play” with found materials are more cognitively advanced than those who spend time playing solely on an outdoor climbing structure, for instance.

Children use “100 languages” to express their ideas

The Reggio Emilia framework was introduced in Italy shortly after the fall of Fascism and the end of World War II, when a group of local women in the villages around the northern Italian city of Reggio Emilia created their own preschool. Italian psychologist Loris Malaguzzi was impressed by the system, and he helped develop and expand the network of schools, initially called the People’s Schools. He refined its student-centered educational pedagogy, based on principles of respect, responsibility, and community, through exploration. The pedagogy uses a self-guided curriculum.

Malaguzzi set forth this educational philosophy in his book The Hundred Languages of Children. The title reflects the belief that children are endowed with 100 languages, like painting and drama, that can be used to express their ideas. The Reggio approach teaches early educators how to use those languages to help children realize their full potential.

Today there are more than 30 municipal educational centers in Reggio Emilia, serving children three months to five years old year-round from 7 am to 7 pm. The program is funded through tax dollars. And the town of 130,000 routinely draws teachers—and not just early childhood teachers, but elementary, middle, and high school teachers—from around the world, who come to learn about the educational philosophy. 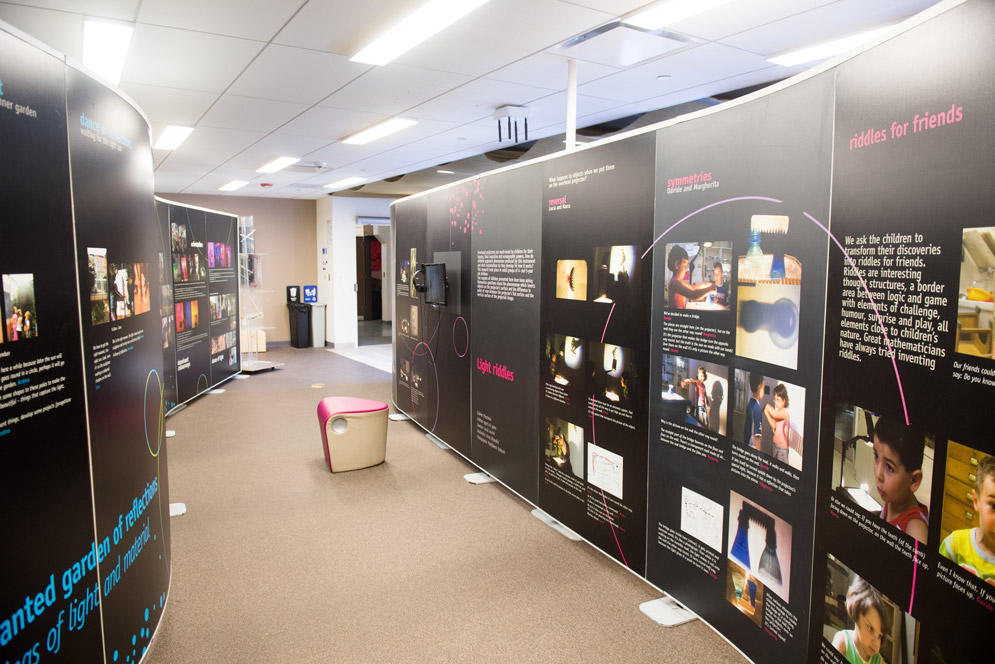 The Wonder of Learning is a self-guided exhibition illustrating the approach used by a renowned municipal early education network in Reggio Emilia, Italy.

“There’s so much pressure today, with scripted curriculums and standards and guidelines for teachers, whether they’re in public or private education,” Suárez says. “Teachers want to break away from that and see how they can let children’s interests be first.”

The self-guided Wonder of Learning exhibition shows educators a world of sun-drenched preschools, where teachers are skilled in the nuances of letting children safely follow their innate sense of curiosity. One display shows how young students visiting a museum are drawn to the sounds shoes make in a stairwell. Teachers and artists, or “atelieristas,” coteaching the class use that interest as a springboard to study rhythms, draw different styles of shoes, from slippers to clogs, and talk about the sounds they make.

Another group of Reggio children study the movement of light and shadows in a room, talking about them as a metaphor for life, from birth through growth, full development, decline, and passing away.

The exhibition also includes images of the Gianni Rodari Center, a sun-splashed room for 24- to 30-month-olds with a wall of windows. The architecture is intentionally designed to allow changing light in. “These constant variations create scenarios that make children marvel,” the exhibition notes, “inviting them to new exploration and opportunities for knowing.”

Such thinking has inspired at least 30 different Reggio networks around the world, the one in Boston among them, and was the foundation for the Blue School, a preschool in New York cofounded by members of the Blue Man Group for their own children.

“The work is not just about the end product,” says BARIN board member and exhibition organizer Kelly Pellagrini, who founded and directs a Reggio-inspired preschool in Charlestown. “It’s about trial and error, and it’s quite compelling. The child is capable and a protagonist in their own learning, which is very different from thinking of children as an empty vessel and teachers pour all that content knowledge into their minds.” 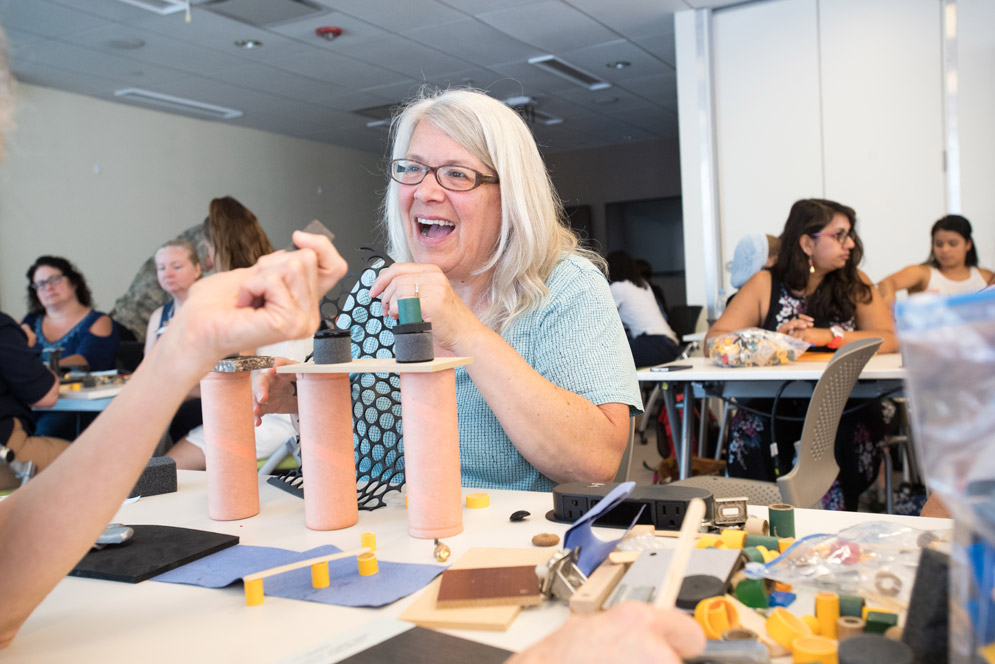 Amy Kahn, cofounder and a teacher at First Bridge Preschool in Needham, at a Wonder of Learning workshop.

The Boston-area Reggio network lobbied for years to bring the exhibition back to the city (it had been here once before, in 1981). Funding came from a variety of sources, including the Barr Foundation, the Boston Foundation, and the preschool Pellagrini runs, Charlestown Nursery School, making it possible for attendees to participate in workshops and discussions at little or no cost. One BU faculty member even donated $20,000 to support the exhibition.

“It’s fundamentally the right of every person working with young children to know the schools of Reggio Emilia,” Pellagrini says.

Suárez believes the exhibition will inspire preschool teachers and educators of all ages, especially at a time when young children are spending so much time in front of cell phone and TV screens instead of exploring the physical world. “I think for teachers, Reggio Emilia feels a little like an antidote,” she says.

It did for Cambridge preschool teacher Kim Haywood, who says that parents sometimes have a dim view of play, preferring instead to know what their child accomplished at preschool. “They say, ‘Play? What are you talking about?’” Haywood says.

“I tell them it’s about using your imagination. And there are benefits.”

The Wonder of Learning: The Hundred Languages of Children is on display through November 15 at the BU Wheelock College of Education & Human Development, 180 Riverway, Boston. Admission is free. Find exhibition hours and other information here and a full list of educational workshops and links here.

BU Hosts The Wonder of Learning: The Hundred Languages of Children

There is 1 comment on BU Hosts The Wonder of Learning: The Hundred Languages of Children

BU Hosts The Wonder of Learning: The Hundred Languages of Children
1
share this