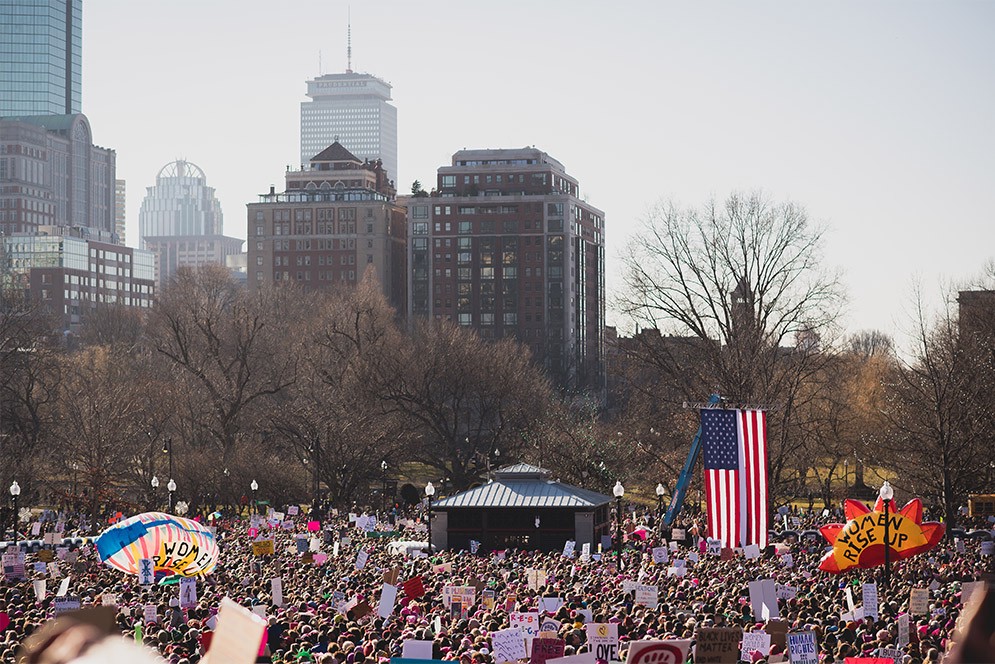 The Boston portion of the Women’s March drew a crowd estimated at 175,000 people. Photo by Jackie Ricciardi

Sunday, January 21, 2018, marked the first anniversary of the Women’s March on Washington, one of the most significant and impactful protest movements of the past decade. As women and allies around the globe rallied together again on behalf of social, racial, and gender equality, we must ask, what is the significance of the March and the movements such as #metoo and #timesup, that were born out of it?

Boston University professors Tammy Vigil, assistant professor of communication, Ashley Farmer, historian of African-American women’s history, and Diane B. Balser, co-director of BU’s Undergraduate Women’s, Gender, and Sexuality program, draw upon their diverse sets of disciplines, backgrounds, and experiences to shed light on the evolution of modern-day feminism, and the ongoing conversations about race, class, and sexuality that the Women’s March helped bring to the forefront, and where we are today, one year later.

In 1776, Abigail Adams famously implored her husband and other male leaders of the time to “Remember the Ladies” when drafting the documents that would guide the development of the United States of America. She warned that women would “foment a rebellion” if they were not appropriately considered. The presidential election 240 years after Adams’ plea provided inspiration for contemporary women to fulfill Adams’ promise of an uprising. While there have been other examples of female-led demonstrations throughout history, the multiple massive gatherings comprising the 2017 Women’s March served as a reminder that women, in spite of their historic treatment as ancillary and even contingent citizens, have the potential to wield great potential power.

In the days and weeks following the Women’s March questions arose regarding whether, and how, women would put this power to use in meaningful ways. The year that followed provided some answers. Record numbers of women indicated an interest in seeking elected office by participating in programs such as Iowa State University’s Ready to Run nonpartisan campaign training sessions for women. When the New York Times broke a story about the sexual abuse and harassment women faced from an influential male Hollywood executive, thousands of women showed support for the victims and raised awareness regarding the widespread nature of workplace harassment by reviving the #MeToo movement and sharing their own stories. Near the end of the year, black women demonstrated their particular political strength by helping Democratic candidate Doug Jones beat Republican Roy Moore in an Alabama special senate race.

Although women have been striving for political and social equality for centuries, in the year that followed the Women’s March, women seemed to become acutely aware of their own agency as political and social actors; they also seemed less inhibited about using their influence. They pushed back against being defined relationally (e.g., battling against the usual characterization of female victims as “someone’s daughter/wife/sister/mother”), tried to claim the dignity of personhood historically denied them, and used their own resourcefulness to sustain attention to issues that had previously been ignored or dismissed. While it is impossible to claim a concrete causal relationship between the March, and the seeming empowerment of women in various social and political roles, the event itself certainly drew attention to the discontent women felt and set a positive tone for interpreting women’s issues and actions throughout the year that followed. The question that remains, however, is whether this benchmark moment in women’s ongoing pursuit of true social and political equality indicates a true shift in perspectives. Let’s hope so.

The first anniversary of the Women’s March on Washington offers a moment to reflect on popular and political conversations about women’s rights and gender roles in American culture. In response to a contentious election season filled with sexism and allegations of sexual misconduct, the leaders of the March rallied women together to “send a message to all levels of government that [women] stand together in solidarity.” The goal was also to ignite a grassroots movement on behalf of women. As the event gained steam, however, it also drew criticism for its lack of inclusiveness of women of different backgrounds and groups. To be sure, the leaders worked to create leadership that “reflect[ed] a balanced representation” of women. However, questions remained about the event’s inclusiveness as white women comprised the largest number of March participants in cities around the world.

Women’s March leaders may not have been able to achieve diverse participation; however, they did incite important conversations about diversity in activism and leadership. Many scholars and activists (including myself) published articles contextualizing the lack of inclusion of black women and other women of color in mass, women-centered demonstrations and offering insight into what kinds of issues women of color would like to see addressed. Moreover, a wave of grassroots organizations focused on the specific needs of various women of color developed after the March. This attention to women of color’s specific oppression and concerns also extended to the #metoo campaign. Although the original focus of the movement was on upper-class white women, attention more quickly shifted to Tarana Burke, the actual creator of the movement. We also saw Burke, and other women of color activists such as Ai-Joo Poo, director of the National Domestic Workers Alliance, recognized in one of the most public spaces possible: the Golden Globes. The Women’s March and the debates about inclusiveness that surrounded it helped propel public and popular recognition of women’s experiences and the importance of a multifaceted, race- and class-conscious understanding of the issues different women face. As the anniversary of the March approaches, let’s hope we can keep these conversations going.

The women’s march—held right after the inauguration of President Donald Trump—was likely the largest set of demonstrations in the history of the world. Why were they so large? Certainly, the anger and disbelief that a man whose politics and policies were so fundamentally against people of color, poor people, immigrants, women, and all oppressed groups could become President of the United States played a major role. In addition, that the actual popularly voted candidate was a woman and could have been the first woman President of the United States pressed even more buttons. Another immediate factor was the overt misogyny and racism that defined the actions, language, and politics of Donald Trump. During the election the sexually violent behavior that Trump defended and had acted out throughout his life so visibly offended so many women and male allies—that the key most universal theme of the march (the pink “pussy” hats) portrayed the unifying fight against sexual violence.

The Women’s March was a culmination of years of fighting for ourselves and fighting on all sets of issues which combined sexism, racism, class, poverty, LGBTQ discrimination, and others. It did mark, not necessarily a new era, but a huge leap forward. It was one of the more important milestones that set the stage for the #metoo movement—remembering that sexual violence and sexual exploitation of women, and other groups, has become one of the key issues in the world today.

The movement’s real vision still needs development. Where are we headed? Are we simply pushing back against the policies of Donald Trump or are we fighting for a world in which women have real influence over the decisions that affect us all?

This article on the women’s march was originally posted on Medium.com.

The Women’s March and Its Impact, One Year Later

There are 3 comments on The Women’s March and Its Impact, One Year Later

The Women’s March and Its Impact, One Year Later
3
share this