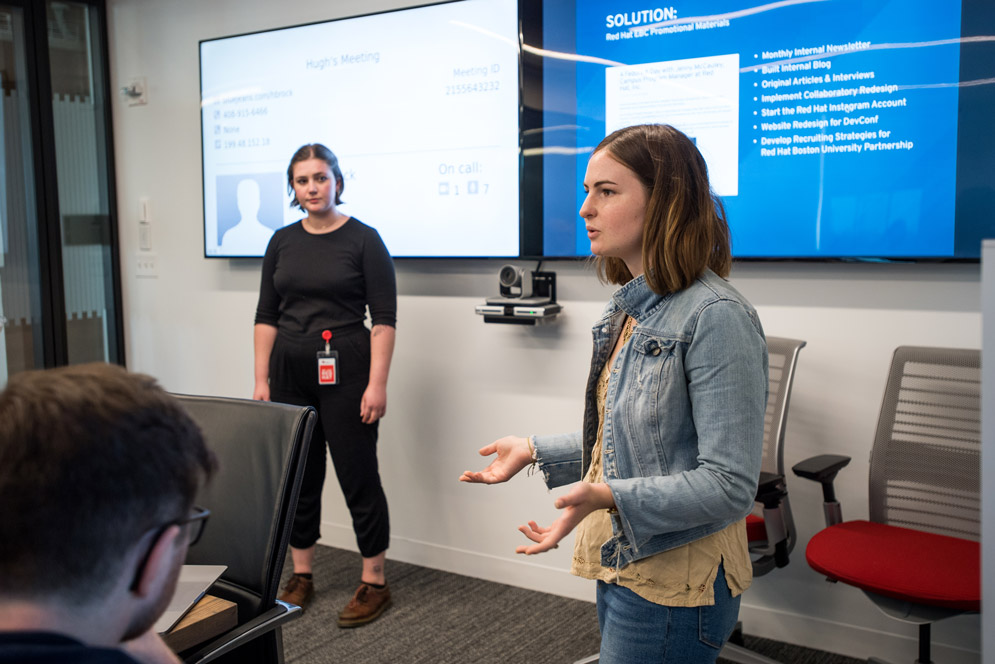 Grace Colbert (CFA’19) (left) and Fiona Whittington (COM’19) talk about projects in progress to fellow interns and Red Hat staff at a lunchtime series at the company’s offices in the Seaport District.

As a computer science major, Chloe Kaubisch was already looking for a tech internship last November when an opportunity surfaced at the Boston office of Red Hat. She knew the fast-growing company was the leading provider of open-source enterprise software, but what sealed it for her was the chance to work on ChRIS Research Integration Service, created with Boston Children’s Hospital.

Kaubisch (CAS’20) is part of a team of engineers and interns using open-source software and cloud computing technologies to make high-powered computing more widely available for medical analytics, while allowing healthcare organizations to maintain control of their data.

By using cloud capabilities to analyze large volumes of data, such as a collection of brain scans, they can speed up and improve information delivery to doctors making critical decisions about patient care in cases such as pediatric brain cancer. That’s the sort of work that matters to Kaubisch, whose mother is a neurologist and father an oncologist.

She has been performing scalability, reliability, and performance tests on components of the ChRIS software architecture. “I feel like I’m really lucky to be working on something that will have such a real-world impact,” she says.

By this summer, after several months working at Red Hat, Kaubisch was one of 30 BU students among 39 interns in the products and technologies department in the company’s offices in the Seaport District. (Two others interned with the sales and consulting department.)

“There’s a big emphasis on learning,” Kaubisch says. “We’re not here just to work. Everyone’s very willing to mentor and answer all your questions, not just about what something does, but why.”

In January 2017, BU and Red Hat, which is headquartered in Raleigh, N.C., announced a $5 million, five-year partnership now known as the Collaboratory, to advance research into emerging and translational technologies, such as cloud computing and big data platforms. The Red Hat internship is not funded by the Collaboratory, but the large group of BU students is “a nice side effect” of the cooperation and communication between the two, says Hugh Brock, director of engineering for BU research initiatives at Red Hat. ChRIS is just one of half a dozen Collaboratory projects that many interns work on.

“A lot of places you’re an intern and you come in and do grunt work,” says Paul Cormier, Red Hat executive vice president and president, products and technologies. “We have interns coming in and doing leading-edge, bleeding-edge stuff. And that’s how you attract them, too—that’s how you get the best.”

Having a large cohort of BU students in the same company has created an empowering camaraderie, says Azer Bestavros, founding director of BU’s Rafik B. Hariri Institute for Computing and Computational Science & Engineering. The group also acted as a magnet, attracting others from the Hariri Institute, notably BU SAIL (Software & Application Innovation Lab) software engineers and interns, to spend time at Red Hat offices.

“That is precisely the idea of the Collaboratory,” says Bestavros, a William Fairfield Warren Distinguished Professor and a College of Arts & Sciences professor of computer science.

“We started off targeting 20 interns in the office for the summer, and the intention was to get most of them from BU,” Brock says. “As we moved through the process, though, we kept finding more students we wanted to bring in—some already working on Collaboratory or Mass Open Cloud projects, some who heard about it from their friends. It really grew organically.”

The program also kick-starts careers. Red Hat has already hired nine of the interns who were graduating, and expects to hire half a dozen or so more when they become available, Brock says, adding with a smile, “That’s why we’re all here in Boston.”

Big on sharing with the open-source community

Founded in 1993, Red Hat is now a $3 billion-a-year company, with more than 11,000 employees. Focused on the Linux operating system, it builds open-source software, meaning that the code is publicly accessible, so that people can modify and adapt it and share their work with the open-source community. Red Hat sells subscriptions, including updates, support, training, and integration services, for its open-source products.

Urvashi Mohnani (ENG’17) was a Red Hat intern last year; she’s now on the payroll as a software engineer working on ChRIS. She says Red Hat is big on employees using blog posts and other methods to share their work with the open-source community. “These internships and experiential opportunities not only help our students gain practical, hands-on technical experience, but also help them develop important soft skills—communication, teamwork,” says Abraham Matta, a CAS professor and chair of computer science.

Fiona Whittington (COM’19) built a relationship with Red Hat through the Girls Who Code organization; she founded the BU chapter in 2016 and was president from 2016 to 2018. Red Hat was “super-adamant about helping in the community,” she says. “I got to know who they were and what they were about, and became friends with the recruiter. And then I kind of fell in love with the concept of open source, and I came by their office and knew they would be a good fit for me.”

She started an internship in January that ended in August, working primarily for Red Hat’s Executive Briefing Center. Among her duties was helping the company with relationship-building at BU, including writing student-focused blog posts. She found herself willingly coming in early and staying late, even dropping by on weekends.

“One of the great things about Red Hat is that titles don’t really matter,” Whittington says. “You could be an intern or the CEO, and it’s all about your idea and how you choose to contribute. It’s easy to hop onto a project, or at least learn what it’s about.”

Recently a Red Hat engineer spent a couple of hours teaching her how to use OpenShift, the company’s open-source container application program, for a project that had nothing to do with his own work. This “really astounded me,” she says. “He was just sitting there patiently, dedicated to seeing me successfully deploy my application. I’ve had many experiences like that.”

Red Hat intern Ahmed Sanaullah (ENG’20) is a PhD candidate whose dissertation subject and his work for the company are on a major cloud computing advance known as a field-programmable gate array (FPGA), which reconfigures hardware in the cloud based on the user’s needs. Coming to Red Hat “was massive,” Sanaullah says. “This internship is really important. In three months working here, we’ve taken something that was just an idea, and now we’re close to a prototype, not just for our own use, but to deploy it on infrastructure like the Mass Open Cloud.”

“The relationship with Red Hat is great in that they are invested in working across the traditional academic-industrial lines,” says W. Clem Karl, a College of Engineering professor and chair of electrical and computer engineering. “They get students directly hooked into real problems, and conversely, the contributions of students get rolled back into production products. Both sides benefit. It’s a great program and we are lucky to have it connected to BU.”

Open-Source Summer in the Seaport

There is 1 comment on Open-Source Summer in the Seaport