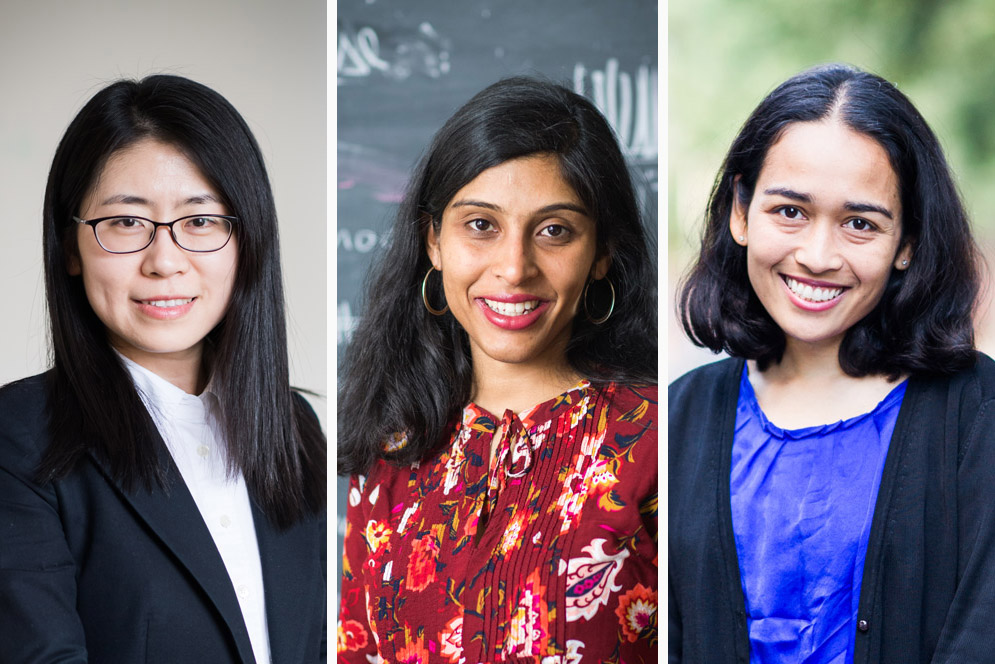 Wen Li studies potential killers. That might seem awfully dramatic work for a Boston University College of Arts & Sciences assistant professor of astronomy, but her research focuses on Earth’s radiation belts and their “killer electrons,” which she says can wreak havoc with satellites’ electronics and “be hazardous to astronauts in space.”

Li seeks to understand what causes the acceleration, and loss, of killer electrons in the belts, which range between 1,000 and 60,000 kilometers above the planet’s surface. Better understanding these dynamics, she says, might mitigate the risks to satellites and space vehicles. Li was one of the winners of a 2017 James B. Macelwane Medal from the American Geophysical Union, given for “significant contributions to the geophysical sciences by an outstanding early-career scientist.”

The Alfred P. Sloan Foundation is impressed. It has named Li and two other BU scientists 2018 Sloan Research Fellows. The two-year, $65,000 fellowships are given annually to 126 scholars who are in the early stages of their careers and “represent the most promising scientific researchers working today,” according to the foundation website.

Jennifer Balakrishnan, a CAS assistant professor of mathematics and statistics, received the fellowship for her research into something as old as the ancient Greeks: number theory, the study of the properties of positive integers (1, 2, 3, and so on). Anushya Chandran, a CAS assistant professor of physics, specializes in quantum mechanical systems and won the fellowship for her study of the low-temperature properties of materials and gases.

Li says the Sloan money will be crucial in expanding her research from her home planet to farther out in space.

“I proposed to perform a comparative investigation of killer electron dynamics in the Earth’s and Jupiter’s magnetosphere,” she says. The magnetosphere is the area around each planet dominated by its respective magnetic field.

Balakrishnan will use her fellowship funds to pay for travel—for her and for the graduate students who assist her—to professional conferences around the world to “share our work with a broader audience.” That work, the study of curves defined by algebraic equations, includes “developing techniques to find special points on these curves that can shed insight into fundamental problems of number theory,” she says.

Chandran doesn’t have a laboratory for her materials research—“I do pen-paper calculations and work on a computer,” she says—and the fellowship funding will be helpful in that regard. She may use some of it to purchase additional computing time at the Massachusetts Green High Performance Computing Center in Holyoke, she says. The supercomputing data center is a joint venture of BU, Harvard, MIT, Northeastern, and the University of Massachusetts.

Ann Cudd, dean of the College of Arts & Sciences, says that “for BU and CAS to have three fellows in one year is just amazing.

“Jennifer Balakrishnan is an exceptional number theorist,” Cudd says. “Wen Li just won the American Geophysical Union James B. Macelwane Medal. Anushya Chandran is an outstanding physicist. Together these three high-profile women scientists bring honor to BU and take our students to the very cutting edge of contemporary research in their fields.”

Created in 1934 and named for the former president and CEO of General Motors, the Alfred P. Sloan Foundation supports research in science, technology, and economics.