CGS dean is an expert on Charles Dickens 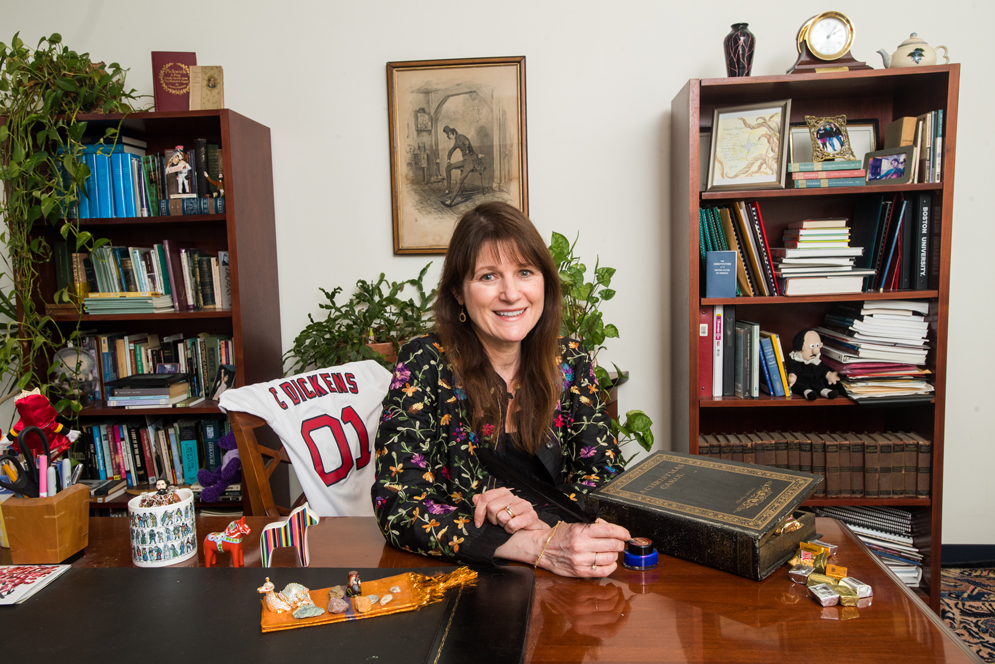 Click on the circles above to see more of what Natalie McKnight displays in her Commonwealth Avenue office.

Victorian scholar Natalie McKnight’s office is littered with books by and about Charles Dickens and with Dickens-related tchotchkes, like her customized Red Sox jersey with “C Dickens” on the back and a collection of Dickens action figures. The College of General Studies dean even wears a Dickens charm bracelet.

The 19th-century British novelist and social critic is known for his gritty accounts of life in the country’s workhouses and orphanages. Among his most celebrated are David Copperfield, The Life and Adventures of Nicholas Nickleby, Oliver Twist, and perhaps most famous, A Christmas Carol, especially popular during the holiday season, 175 years after it was written. McKnight, who has published several books on Dickens and is coeditor of Dickens Studies Annual, offers a surprising assessment of Scrooge, the novel’s misanthropic protagonist.

“Scrooge makes me laugh out loud,” she says. “It’s well-known how mean-spirited he is, but if you look where he is first introduced, he’s actually very witty, very funny, obviously in a real, caustic way. It’s the first sign that he could be redeemed, because anyone who has a sense of humor still has a spark of hope left in them. I love that Dickens would take this person who is just flat-out awful, but give him that redeeming quality of a sense of humor and then watch that grow.”

A member of the CGS faculty since 1990, McKnight hosted the 22nd annual Dickens Symposium at BU this past summer, cosponsored by the international Dickens Society and the CGS Center for Interdisciplinary Teaching & Learning.

While she remembers seeing the television classic Mister McGoo’s Christmas Carol when she was four (“it still holds up as a really great version,” she says), it wasn’t until she was taking a graduate school seminar on Dickens that she really delved into the writer. “We did these close readings of texts, and we would laugh out loud and we would cry,” she says. “I would think, wow, now there’s an author. I get to spend my life with somebody who still to this day makes me laugh and cry, sometimes within two pages.”