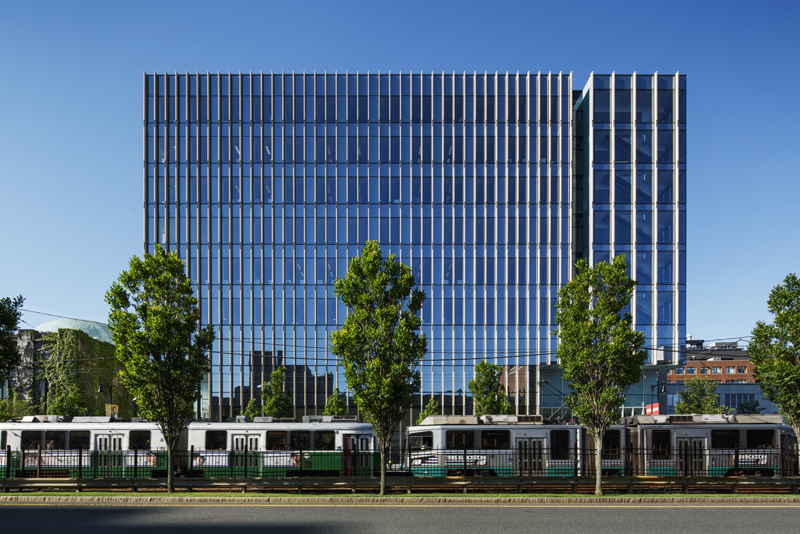 But even on days when “the formaldehyde hits the fan,” as neuroscientist Steve Ramirez likes to say, the Rajen Kilachand Center for Integrated Life Sciences & Engineering—with its state-of-the-art labs, floor-to-ceiling windows, and spectacular views of Boston University’s campus, Boston, and the Charles River—gets him jazzed about research.

“There are some buildings that make you feel awful,” says Ramirez (CAS’10), a BU College of Arts & Sciences assistant professor of psychological and brain sciences, who studies ways to modulate memory to combat post-traumatic stress disorder and other brain disorders. “They’re old and gray. But here, everything is new and white. It wakes you up.”

Another thing about the $150 million, nine-story, 170,000-square-foot research facility that excites Ramirez and other researchers: their proximity to colleagues in this new space. Ramirez is surrounded by scientific kindred spirits from many fields—optogenetics, neurophotonics, systems neuroscience, cognitive neuroscience, neuroengineering—all sharing a mission to unlock the secrets of the brain. “You’ve heard of Joe Biden’s Cancer Moonshot,” says Ramirez. “This is the neural shot.”

The Kilachand Center brings together Charles River Campus and Medical Campus life scientists and engineers who are tackling some of the biggest problems in science and medicine: antibiotic resistance, detection of infectious pathogens, treatments for Parkinson’s and Alzheimer’s diseases, the causes of autism, and more. It’s home to the Center for Systems Neuroscience (CSN), the Biological Design Center (BDC), the Center for Research in Sensory Communication & Emerging Neural Technology (CRESCENT), and the Cognitive Neuroimaging Center, with its $2.5 million Siemens 3 Tesla MRI machine.

Photo Gallery: The research colloquium room seats 98, and can be opened to the lobby to provide room for larger gatherings. Meeting rooms have glass walls looking out on Commonwealth Avenue.

Boston architectural firm Payette designed the building so researchers, postdocs, and graduate students can’t help but run into one another. The first floor commons has an expandable 98-seat research colloquium room—it can be opened up into the lobby for more seating—set up to accommodate CSN director Michael Hasselmo’s popular neuroscience lunch seminars, which draw upwards of 80 people from both campuses and are open to all. Four other meeting rooms have glass walls looking out on Commonwealth Avenue (and blackout shades, if needed).

A so-called communicating staircase connects individual floors and labs, leading people to interactive spaces where they can work at their laptops and brainstorm over coffee or lunch.

There are no corner offices. The corner real estate, with its glass windows, is shared social space, with a view that belongs to everyone.

“It’s hard to get scientists to be collaborative about space, especially at a university,” says Tyler Perrachione, a Sargent College of Health & Rehabilitation Sciences assistant professor of speech, language, and hearing sciences and director of the Communication Neuroscience Research Laboratory. Perrachione was part of the team of researchers that worked closely with the architects on the center’s first-floor brain imaging center. “But the way this building is set up makes insular labs a historical artifact,” he says. “The space is fluid. No one lab alone has all the expertise to move big science forward. That’s the future of biomedical research and the future of systems neuroscience research. This building puts BU at the forefront of these domains.”

In her former digs at 677 Beacon Street, Barbara Shinn-Cunningham, a BU College of Engineering (ENG) professor of biomedical engineering and CRESCENT director, had laboratory space scattered from the basement to the third floor. Her graduate students and postdocs had desks, and office space, on all four floors. “I would literally not see people in my lab unless they came to my room,” she says.

Now, everyone is together in her new ninth floor Kilachand Center lab. “It has changed the group dynamic,” she says. “Because of the flow of the building, we bump into each other all the time. People are starting to really know what their labmates are doing, in detail. The unity is weaving a social fabric that supports interactions. Not only are we closer physically, we have these beautiful spaces that lead us out of our little cubbyholes and get us talking.”

Biomedical engineering PhD candidate Jasmine Kwasa (ENG’19), who works in Shinn-Cunningham’s lab, credits the lab’s design, and the new free-flowing exchange of ideas, with enabling her to do better and even faster science. “Maybe in the past I’d go into the lab, start up an experiment, and if I’d run into a problem, I’d have to troubleshoot all on my own,” she says. She was reluctant to track down postdocs in their separate room, she says, worried she would be disturbing them with her questions. But now, “you just walk into the main space and say, ‘Has anyone run into this problem’ or ‘Does this technique make sense?’” Someone is always available to help, she says.

Photo Gallery: Principal architect Charles Klee provided Shinn-Cunningham with features she needed, including soundproof booths for hearing experiments, a write-up area outside the booths, and a sink and shower for test subjects to use after experiments. Photo by Bob O’Connor

If you’re going to design a science building that works, says the building’s principal architect Charles Klee (son of two biochemists), you’ve got to talk to the scientists.

One of Shinn-Cunningham’s requirements was three double-walled soundproof booths for the painstaking testing of human subjects’ hearing and the brain. Other features that came out of her lab’s discussions with the architects: a room adjacent to the soundproof booths where researchers can run an experiment undisturbed (a light signals when the room is in use). A write-up area outside the booths. A sink and shower, so people participating in experiments can, for instance, wash the gel used in tests out of their hair.

The architects have ensured that Douglas Densmore, an ENG associate professor of electrical and computer engineering, will have sufficient flexible space and power for the robotics central to his DAMP (Design, Automation, Manufacturing, Prototyping) lab, which he is still setting up. The lab will use software to develop novel biological systems and eventually create new medicines, energy sources, biosensors, and other materials. The only other academic lab similar to DAMP in the United States is the Illinois Biological Foundry for Advanced Biomanufacturing at the University of Illinois at Urbana-Champaign, says Densmore.

Densmore and DAMP are part of the BDC, occupying lab space on the fourth and fifth floors. Ahmad “Mo” Khalil, an ENG assistant professor of biomedical engineering and BDC associate director, says graduate students and postdocs have been raving about the elegant flow between their glass-walled offices, with doors that close, and the lab benches. This allows them to pop back and forth between lab and office, where they can write up experiments and other data and toss down a cup of French roast (BU Environmental Health & Safety regulations prohibit coffee and other beverages, as well as food, in the lab).

The task lighting the architects built into the bookshelves above the lab benches is a popular feature of Khalil’s lab. “I love the lighting,” says Meghan Bragdon (GRS’22), a graduate student in the molecular biology, cell biology, and biochemistry program, who works in the lab. “It’s focused right where we’re working. We’re molecular biologists and chemists. We move tiny amounts of liquid around. Everything is small. You want focused light, without it blasting from overhead.”

The 3 Tesla MRI scanner—seeing inside the brain

Some people like to take visitors to Fenway Park to see the Red Sox. Perrachione likes to show off BU’s new MRI machine. He points out that the scanner, with a magnetic field six million times more powerful than the Earth’s, offers a window into the immense complexity of the brain. The centerpiece of the first-floor brain imaging suite, the scanner is a game changer for BU researchers, who no longer have to trek to Harvard, MIT, or Massachusetts General Hospital’s Martinos Center for Biomedical Imaging in Charlestown, Mass., to do brain imaging. Researchers from other institutions around the city are also expected to use BU’s machine.

Chantal Stern, a CAS professor of psychological and brain sciences and director of the brain imaging center, is the principal investigator on a $1.6 million National Science Foundation grant that helped pay for the MRI scanner.

“Every consideration was made to get the best signal while avoiding all the noise, and Commonwealth Avenue is a very noisy place—the trolley, the traffic, the city, the students’ cell phones,” says Perrachione. (To minimize electrical and magnetic interference from MBTA Green Line trolleys, the scanner is not only shielded, it was placed in the room so that it’s parallel to the train tracks.)

Perrachione, Stern, and David Somers (GRS’93), a CAS professor of psychological and brain sciences and director of the Attention & Perception Neuroimaging Laboratory, worked closely with the architects on just about every aspect of the brain imaging center, including the furniture, the technology, the seven shielded testing rooms (in addition to the one with the MRI scanner), and the vibration-proof floors.

They wanted the center to be welcoming to people participating in experiments, like children and those with developmental disorders, “who might find the imaging environment uncomfortable, but whose brains are extremely important to understand,” Perrachione says. A mock scanner will give them a friendly introduction to the actual MRI machine (which is less noisy than many scanners, thanks to acoustic paneling inside the room and noise-absorbing foam pads in the headrest). With kids in mind, a waiting room will be outfitted with stuffed animals, toys, and colored panels on the walls.

At most hospitals and research centers, scanners are hidden away in windowless rooms. At BU, a large interior window allows everyone in the control room to peer into the room with the MRI scanner. As well as making the room more inviting for volunteers who will participate in brain-scanning experiments, the window will allow groups of students to learn firsthand about neuroimaging.

“Great discoveries are going to be made here,” says Perrachione. “They will come from the science that happens in that room.”

There are 3 comments on Designing Science