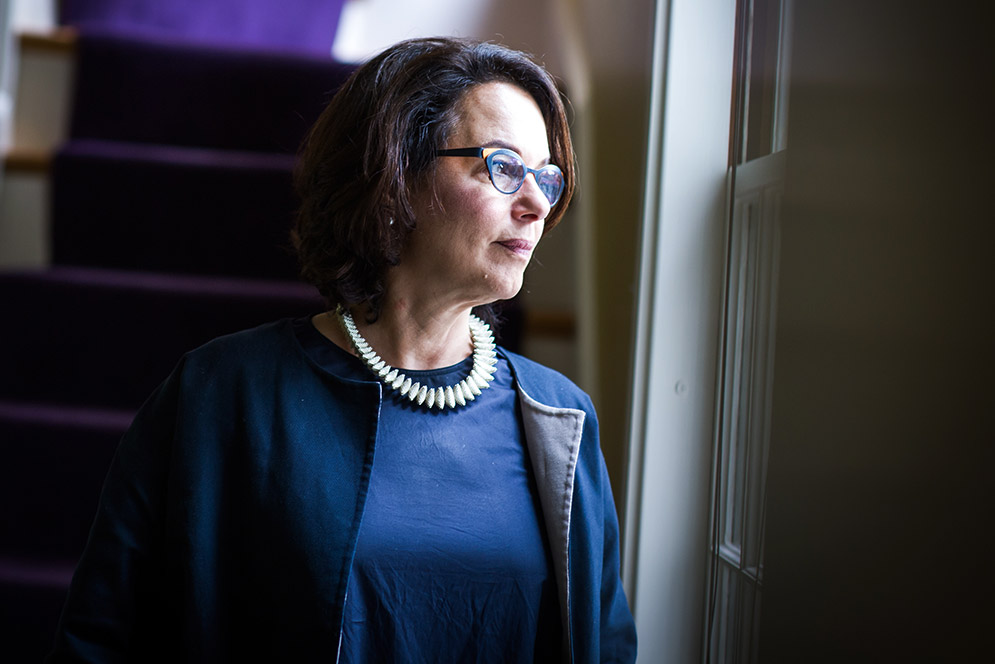 In a room inside a maximum security prison in The Hague, Jessica Stern, a small woman in a conservative black pantsuit, was seated across a wooden table from Radovan Karadžić, the Bosnian Serb warlord convicted of war crimes and crimes against humanity. He was found guilty of genocide for the massacre of 8,000 Muslim men and boys at Srebrenica in July 1995. At 70, Karadžić was still an imposing man, 6-foot-4, barrel-chested, with his trademark mane of white hair intact.

Stern is a research professor at BU’s Frederick S. Pardee School of Global Studies and one of the world’s leading scholars of terrorism and other forms of violent extremism. The United Nations International Criminal Tribunal for the former Yugoslavia, in The Hague—the court that had sentenced Karadžić to 40 years in prison—granted her permission to interview the former Serb leader for a book she is writing examining the history behind his role in the Balkan war.

Karadžić is a psychiatrist, a poet, and a devout Orthodox Christian. He is also a liar and a charismatic master manipulator. During his 13 years as a fugitive war criminal in Belgrade, he had transformed himself into a New Age guru. Now, in the interview room where he had been holding forth on the glorious Serb past, Karadžić abruptly announced that he wanted to show her how he’d worked as an energy healer.

“I think what he really wanted to do was to show he could dominate me,” says Stern, recalling that meeting in early 2015, a four-hour marathon so intense that even as interviewer and interlocutor parried over countless cups of coffee and tea, neither got up to use the bathroom.

Stern was pursuing her own agenda: to understand the hidden motivations behind the story Karadžić insisted upon, the story in which he is the martyred hero, forced to defend his vulnerable Serb countrymen against the powerful Bosnian Muslims conspiring to establish an Islamist state within the heart of Europe. She wanted to understand how he had been able to simultaneously justify and deny his role in overseeing a campaign of crimes against humanity—serial rape, torture, death camps, ethnic cleansing, murder—in his drive to force Bosnian Muslims and Croats out of villages considered critical to Serb interests.

Looking at him, Stern told Karadžić she was game for energy healing.

He got up from the table and stood behind her. He instructed her to hold her hands in her lap, palms up. “‘Focus on the center of your palms,’” she recalls him saying. “‘Think about God, and if you don’t believe in God, focus on someone you really love.’”

Karadžić raised his massive hands in the air, just inches above Stern’s head, and moved them, palms down, slowly apart and together, back and forth.