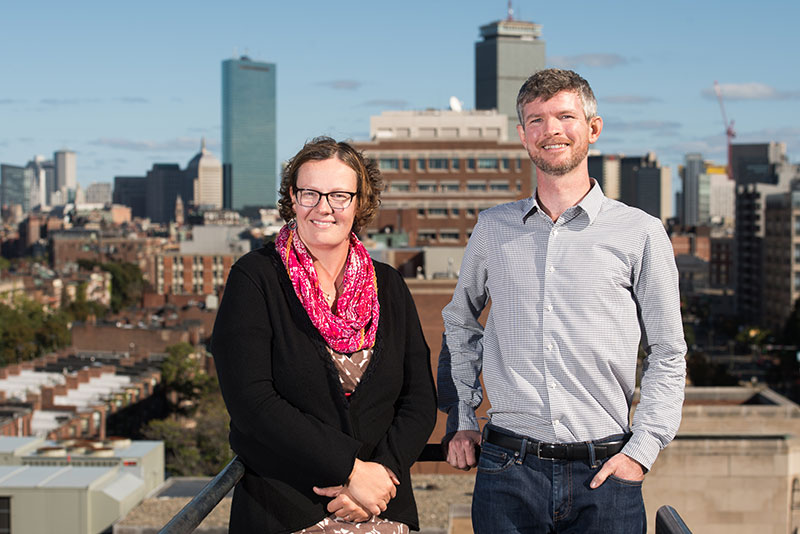 And around the country, mayors shrugged. After all, the federal government has been faltering in climate change regulation for years; and all the while, cities have been stepping up. Through the Global Covenant of Mayors for Climate & Energy, over 600 cities worldwide have signed pledges to reduce greenhouse-gas emissions.

“Cities have the political will to change emissions, and they have policy levers to pull,” says Lucy Hutyra, a Boston University College of Arts & Sciences (CAS) associate professor of Earth and environment. And because cities are responsible for 70 percent of greenhouse-gas emissions, according to the United Nations, their actions matter. But to take effective action, cities need data—ways to accurately measure emissions, pinpoint sources, and monitor change over time. And so Hutyra and her colleague Conor Gately have developed a tool called ACES, for Anthropogenic Carbon Emissions System, that offers the finest-grained maps of CO2 emissions in the Northeastern US to date, with a resolution of 1km2, totaled hourly. The tool, funded by NASA’s Carbon Monitoring System and detailed in the October 12, 2017, issue of the Journal of Geophysical Research—Atmospheres, could provide valuable data to cities nationwide.

“We spend an enormous amount of time thinking about emissions inventories,” says Leah Bamberger, director of sustainability for Providence, RI. Bamberger says that she and her colleagues in the Urban Sustainability Directors Network, a coalition of 135 local governments in the United States and Canada, often have ambitious environmental goals but small budgets and limited personnel. So, tools like ACES are key. “If this product could scale, if it could provide constant monitoring over time, that would be critical.”

Greenhouse gases—including methane, nitrous oxide, and carbon dioxide—are compounds in the atmosphere that absorb and emit radiation in the thermal infrared range, heating the Earth’s surface. This greenhouse effect is necessary for life on Earth, but if greenhouse-gas concentrations in the atmosphere continue to increase at their current rate, Earth’s surface could hit historically high temperatures as early as 2047, say scientists, with enormous effects on weather, wildlife, and the way we live.

Carbon dioxide poses the biggest challenge, because we humans—with our cars and trucks and factories—pump more CO2 into the atmosphere than any other greenhouse gas; in the United States, CO2 made up 82 percent of greenhouse-gas emissions in 2015, according to the EPA. Since 1750, around the start of the Industrial Revolution, the concentration of CO2 in the atmosphere has ballooned from 280 to 406 parts per million, a 40 percent increase. “If we don’t deal with carbon dioxide,” says Gately (GRS’16), a postdoctoral associate working jointly at Boston University and Harvard, “we’re not really going to be able to solve the problem.”

In the past, most maps of CO2 emissions have been what Gately calls “gridded inventories”—national emissions data sorted onto a latitude and longitude grid, usually scaled by population. The result is a map like the one below, created with data from the Emissions Database for Global Atmospheric Research, or EDGAR. 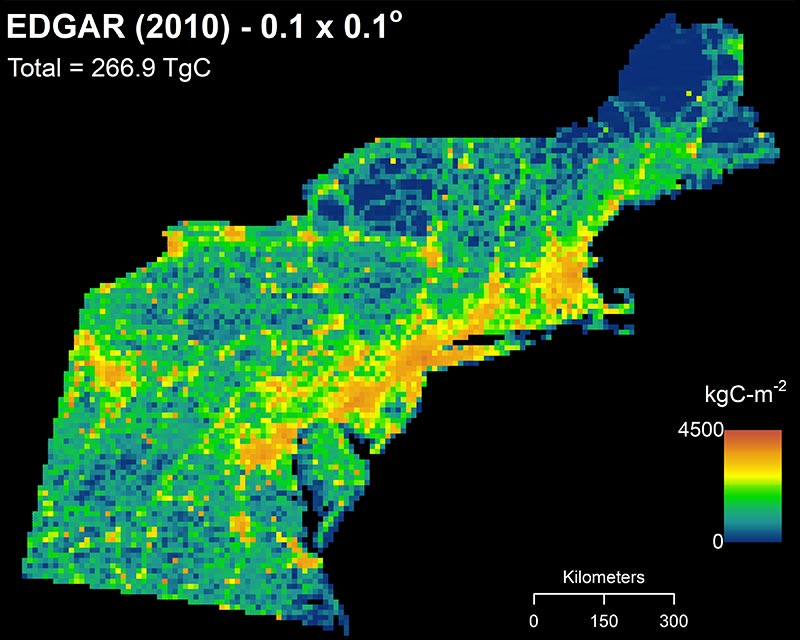 It’s clear from the map that metropolitan areas like Boston and New York are emitting more CO2 than rural areas, but there’s no detail on specific roads, neighborhoods, or point sources. To be fair, says Gately, “These global emissions products were not designed to do urban emission accounting; they’re designed to run larger global models.”

He and Hutyra wanted to do better with ACES. “The goal was to take the finest grained, most local data possible and build a ‘bottom-up’ inventory,” says Gately. The research team started by divvying up the sources of emissions on a giant whiteboard. “We did every sector of emissions of CO2,” he says. “Roads, residential buildings, commercial buildings, industrial facilities, power plants, airports, marine ports, shipping, and railway.” The group searched for data from 2011, scouring every source they could find: city and country records, household fuel estimates, EPA databases, hundreds of traffic sensors located around New England. All of these data, when combined with the amount of fossil fuels consumed in the region (gasoline, diesel, home heating oil, coal and natural gas for power generation), allowed the team to calculate CO2 emissions for all of the major sources. The team then calculated emissions for every hour of the year. For example, says Gately, emissions from roads follow daily patterns of commuting, while residential buildings follow hourly patterns that are higher in the evenings, when the air is cooler, than during the day.

The result is an hourly estimate of CO2 emissions for every one kilometer square between Virginia and Maine, and east of Pennsylvania. Mapped out, it looks like this: 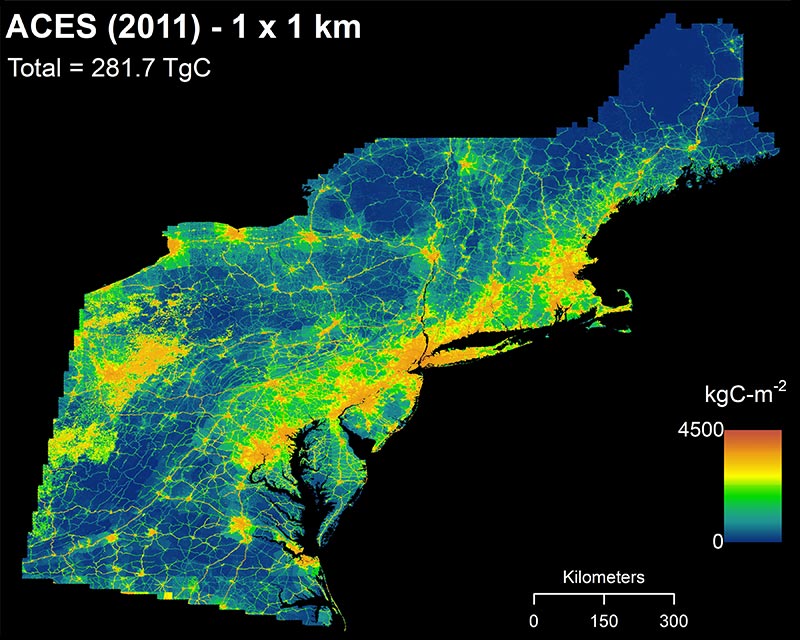 Now with all the algorithms built into ACES, city planners can plug in numbers specific to their own regions. “To update this going forward, it will be a lot less work,” says Gately. “Hopefully we’ve done most of the heavy lifting.”

And here’s a side-by-side comparison of the lower- and higher-resolution models:

The team found some surprises when they compared their CO2 estimates to three widely used global inventories, including EDGAR. Most notably, when they looked at cities, they saw differences as high as 250 percent, with the global inventories both over- and underestimating emissions relative to their ACES estimates. Much of this discrepancy, says Gately, was likely due to the widespread practice of assigning CO2 emissions estimates based on population, which overestimates the contributions of some cities. “There are a lot of people in New York City, but per capita, they probably emit less CO2 than people elsewhere. And those global models don’t really account for that,” says Gately. “So we saw in New York, for example, that they had largely underestimated the emissions in the surrounding suburban rings and overestimated in the core.” The differences come not only from driving patterns, says Gately, but also housing stock and efficiency of buildings.

In early 2016, Bamberger heard about ACES through BU’s Initiative on Cities, and she approached Hutyra and Gately for advice on fine-tuning a CO2 inventory for Providence. The city has a goal to become “carbon-neutral” by 2050, says Bamberger. “But first we need to get a handle on the numbers,” she says. “You can’t manage what you can’t measure.”

The city used a monitoring and reporting tool called ClearPath™, from the ICLEI-Local Governments for Sustainability, and gathered city-wide data on gas and electricity consumption. But transportation was proving trickier—they had an estimate of vehicle miles traveled (VMT) from the state of Rhode Island but no way to tease the data apart. Gately was able to provide block-by-block estimates of emissions, which could help the city target certain CO2 hotspots.

“It was very helpful,” says Bamberger. “They were the only model to offer the city scale and granularity. Being able to dissect the data even further will open up more opportunities for mitigation.”

Gately, working with a three-year, $1.5 million grant from the National Oceanic and Atmospheric Administration, is now expanding ACES to cover the entire continental United States and meeting with government, scientific, and policy stakeholders to help create a core set of methods and data products.

“ACES was, in many ways, a prototype where we were trying to prove that we could do this. And now we’re feeling confident we can do it at a national scale,” says Gately. He notes that DARTE, the road-emissions product he released in 2015, has been downloaded over 1,000 times throughout the US, in metropolitan areas from Sacramento to Kansas City.

“That’s the most validating thing as a scientist, that people actually care about what you’re doing and want to use your stuff,” says Gately. “So we’re hoping that with ACES we continue that, and that people take advantage of what we’ve made.”