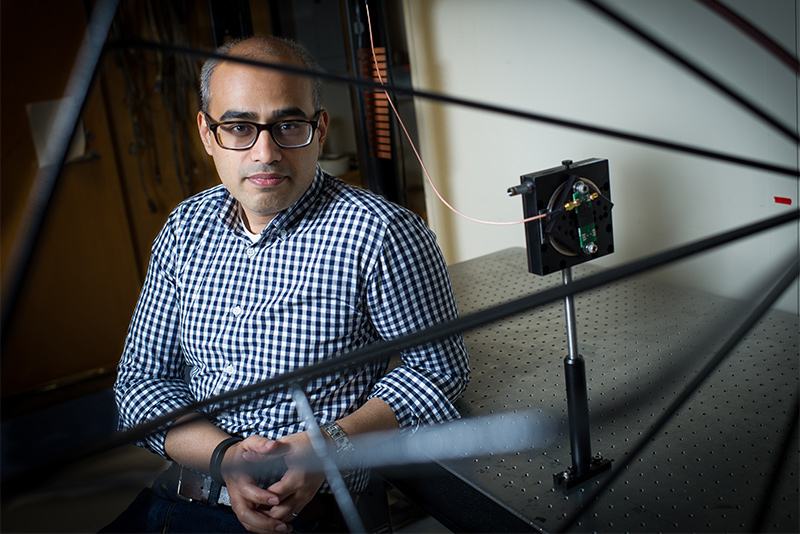 PhD candidate Farrukh Mateen (ENG’18) built a tiny resonator and turned it on and off with one nanowatt of power from three feet away—the length of a lab bench. The research was published in Nature: Microsystems & Nanoengineering. Photo by Jackie Ricciardi

All around us, hiding just outside our range of vision, are miniscule machines. Tiny accelerometers in our cars sense a collision and tell the airbags to inflate. A Nintendo Wii controller’s tiny gyroscopes translate your tennis swing into movement on the screen. An iPhone’s accelerometer, gyroscope, and proximity sensor sense its location in space.

All these little machines, known collectively as microelectromechanical systems, or MEMS, have something in common: they are attached to, or very close to, a power source. For broader applications, like wireless brain implants, scientists and engineers need power from a distance. But while it’s easy to send information through the air—think radio waves—sending power, especially to a miniscule machine, can be a bit trickier.

But now a team of researchers, led by Boston University College of Engineering (ENG) PhD candidate Farrukh Mateen (ENG’18) and Raj Mohanty, a professor of physics at BU’s College of Arts & Sciences (CAS), are closing in on a solution. They have built a tiny micromechanical device and turned it on and off with one nanowatt of power—that’s a billionth of a watt—from three feet away. The device, described in the August 15, 2016, issue of Nature: Microsystems and Nanoengineering, is a miniature sandwich of gold and aluminum nitride that vibrates, or resonates, at microwave frequencies. The tiny resonator is only 100 micrometers across—a little wider than the width of a human hair.

“Wireless power is not new,” says Mateen, lead author on the paper. “Nikola Tesla demonstrated it at the 1893 World’s Fair; but we believe this is the first time it’s been used with a micromechanical resonator.”

In a second round of experiments, the device achieved an impressive 15 percent efficiency using a higher radio frequency. Those results were published online in the August 16, 2016, issue of Applied Physics Letters.

The most promising application for this type of device lies in the emerging field of optogenetics: shining light on genetically modified brain cells to make them behave in a certain way. The field offers great potential for neuroscience research, as well as possible treatments for neurological disorders like Parkinson’s disease. But to plant a device in the body, especially the brain, is challenging. It needs to be tiny and efficient, low-power and low-radiation. Power must travel to the device quickly, through bone and brain tissue. “You don’t want to have to change batteries every day,” says Mohanty, corresponding author on both papers, “and you don’t want to fry your brain.”

There are two ways to send power without wires. The first, magnetic fields, has a short range unless large coils of wire are used, limiting their usefulness for tiny devices. The second, electric fields, has a longer range but bounces off pretty much everything. “But there are ways to work around this,” says Mateen, lead author on both papers. “We thought that optimizing the receiver may be the answer.”

The team started thinking about resonators—materials that naturally vibrate at certain frequencies—like a diving board that whaps the air a certain way, or a wine glass that shimmies in response to a certain sound frequency.

“Resonators are the building blocks of all micromachines,” says Mohanty. “If we could make that work, we could build anything on top of it.”

This particular resonator consists of a layer of aluminum nitride on a silicon base. Aluminum nitride is a “piezoelectric” material—when it senses an electric field, it flexes or resonates. The problem was building a tiny antenna so that the material could sense the electricity in the air.

“We had to change our thinking,” says Mohanty. “We said, why not use the resonator itself as an antenna? That’s where the breakthrough came.” The team turned the resonator into what’s called a “patch antenna” by adding thin layers of gold to the top and bottom. The simple solution did the trick.

“I was really surprised when it worked,” says Mateen, who remembers calling to his colleague, co-author Carsten Mädler (GRS’16), when he first detected a signal. “I said, ‘Dude! You need to see this! I think we can wirelessly actuate this thing!’”

Though the technology is in its infancy, Mateen sees many potential applications, from remote sensors to improve cell phone chargers to brain implants. “The idea of a biomedical application is just awesome,” he says. “It would be great if it ended up in some kind of product that helped humanity in some way. This is one tiny step towards that.”

There are 4 comments on Building a Wireless Micromachine