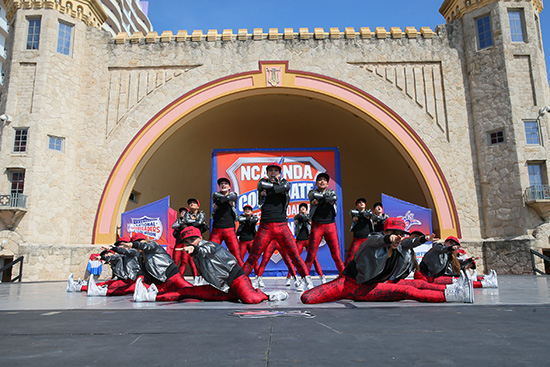 This weekend, the BU Dance Team traveled to Daytona Beach, Fla., for the National Dance Alliance Collegiate Dance Championship. Flights, competition fees, and choreography were largely covered, thanks to more than $18,000 the team raised on BU’s new crowdfunding platform.

“The hardest thing for us is that on top of school, we practice all the time and we perform at the men’s and women’s basketball games, so it’s hard to find time to fund-raise,” says coach and former member Kaitlyn Busconi (Questrom’09), whose team won the Division I team performance. “The best thing about crowdfunding is that it’s easy to fit in with other commitments, because a lot of it is sending emails and pushing out our fundraising page on social media.”

The University has instituted a new policy and website to help academic departments, student groups, and other members of the BU community raise money for research, service trips, projects, events, and other BU-specific ventures. The platform is not meant for students who seek to raise tuition dollars or money for nonacademic travel; student clubs, organizations, and the Athletics teams and groups are not required to use the platform.

Tomorrow, Wednesday, April 13, faculty and students are invited to a workshop that will provide an overview of the new policy and information about how to launch a campaign.

Nicole Hawkes, associate provost for strategic initiatives, says that the growing popularity of programs like third-party crowdfunding websites such as Indiegogo, Kickstarter, and GoFundMe suggested that there was an opportunity for the University to set up its own crowdfunding platform to help individual students, student groups, and faculty raise funds for their projects and ideas.

Unlike those fundraising giants—which raised an estimated $34 billion last year alone, according to Crowdsourcing.org—BU’s new platform delivers the money to the fundraisers whether or not they reach their goal. And unlike those other platforms, BU’s doesn’t charge fees for projects looking to raise less than $50,000 (indirect costs will be charged on research above that amount, and donors’ gifts are tax-deductible). Other benefits, Hawkes says, include the ability to tap into BU’s 300,000-plus alumni network for donations, as well as to use the University for technical, administration, communication, and marketing support.

“Crowdfunding takes a tremendous amount of effort; it’s not just putting your project out on the platform and leaving it alone for six weeks,” says Hawkes, whose team has been working on the new policy for about a year and a half. “A successful campaign really relies on having a good network in place. We want to help the BU community navigate these ins and outs and raise as much money as possible for their projects.”

A few groups volunteered as guinea pigs for the new crowdfunding site. As well as the $18,000 raised for this year’s National Dance Alliance Collegiate Dance Championship, the Dance Team raised more than $19,700 for the same competition last year. The FIRST Robotics team raised $5,433 for the FIRST Robotics competition, while Cara Stepp, a Sargent College assistant professor of speech, language, and hearing sciences, raised $9,010 to fund an open-source video game designed to help children born with a cleft lip or cleft palate learn to speak more clearly.

Researchers especially stand to benefit from crowdfunding, says Gloria Waters, vice president and associate provost for research, who notes that crowdfunding is already being used by faculty and students at many universities to raise money for things like gap funding.

“Crowdfunding could be used to obtain pilot funding for a project that might then allow the faculty member or student to apply for larger sums from more traditional sources,” Waters says. “Alternatively, for students, they may be able to raise all the funds needed to carry out a project for a course or a thesis in this way.”

In a nutshell, here’s how the BU platform works: once a group’s or individual’s application has been chosen to be featured on the BU website, the group or individual is paired with a mentor from Development & Alumni Relations (DAR) to develop project descriptions, email blasts, and marketing materials. Campaigns will typically run 10 to 12 weeks—the first 4 weeks for preparing the campaign and thinking about strategy and the rest for reaching out to contacts and pushing the campaign to potential donors.

DAR new media producer Caitlin Cushman, who worked on the crowdfunding launch team, points to the Dance Team as a good example of a successful crowdfunder. This year, the members snail-mailed letters to family and friends asking for donations for their nationals trip and at the same time were pushing out the campaign to the broader public on social media channels.

Cushman says another benefit of crowdfunding is that it gives students, faculty, and alumni a way to connect. “It’s an opportunity for donors to find something that speaks to them when they’re making a gift,” she says. “Instead of donating to a general fund, they can choose one project and see where their money is going.”

The Crowdfunding at BU workshop will be held tomorrow, Wednesday, April 13, at 4 p.m. at the Questrom School of Business, Room 426-428, Rafik B. Hariri Building, 595 Commonwealth Ave. The event is open to faculty, staff, and students; register here.

There are 4 comments on University Unveils New Crowdfunding Platform