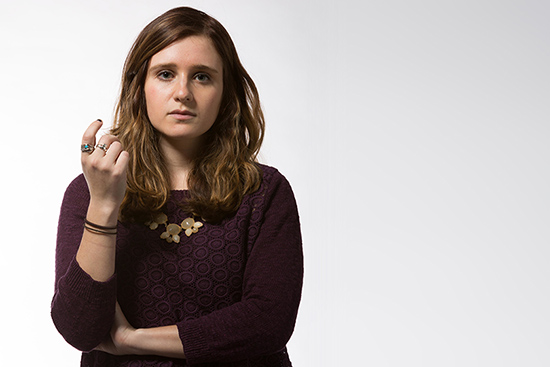 The rabbinic decisions Erin Miller (CAS’17, SPH’18) studies include whether a father could ransom his son from the Auschwitz gas chambers with another’s life. Photo by Michael D. Spencer

Held at Auschwitz during World War II, a man presented fellow prisoner Rabbi Tzvi Hirsch Meisels with an impossible ethical choice. His son was marked for execution, he told the rabbi, but he could ransom his boy by swapping another person in his place. Would Jewish law permit that awful decision?

“The rabbi said, ‘Don’t ask me the question,’” says Michael Grodin, a core faculty member at BU’s Elie Wiesel Center for Jewish Studies and director of the center’s Project on Medicine and the Holocaust. “From that, the man gleaned the fact that he probably shouldn’t do that, because otherwise the rabbi would have said OK.…His son died in the gas chambers.”

A father watching helplessly as his son is dragged off to die: that was just one nightmare dilemma involving responsa, or legal opinions, rendered by wartime rabbis—most in Jewish ghettos, some in the death camps. A School of Public Health professor of health law, policy, and management, Grodin, aided by Erin Miller (CAS’17, SPH’18) through the Undergraduate Research Opportunities Program (UROP), has immersed himself in this “Spiritual Resistance” (Miller’s UROP project title) to the Final Solution. UROP provides funding for faculty-mentored research by undergraduates.

“The work we do reminds the world of the atrocities that happened during the Holocaust, while displaying the unwavering strength of the Jewish people and resistors in general,” says Miller, president of BU Hillel, the center for campus Jewish life. “Resistance comes in many forms, not just physical resistance like the Warsaw Uprising.”

Religious studies hardly prepared these rabbis for decision-making under a regime seeking the extermination of all Jews. Grodin says that to draft traditional responsa, “first of all, you have to have access to other rabbis, so you can communicate and discuss. And second, you have to have access to primary sources,” such as the Talmud, the accumulated Jewish laws and traditions dating to antiquity. With one exception, the rabbis Grodin and Miller study were denied those resources and had to wing it, relying on their own knowledge and ethical sense.

The exception was Rabbi Ephraim Oshry, who lived in Lithuania’s Kovno ghetto. “The ultimate irony,” Grodin says, “is that the Nazis had a warehouse of Jewish artifacts in Kovno, including volumes of Jewish literature and law, that they kept because they were going to have a museum for the ‘extinct race’” they were hell-bent on annihilating. Oshry had access to the warehouse, allowing him to inform his responsa with documentation.

Of the rabbis in the study, all but Oshry perished during the war (he lived until 2003), but they left records of their decisions. Oshry wrote his on cement sacks that he buried during the war and later exhumed, augmented, and published.

Even after the hostilities ended, survivors were haunted by ethical ghosts. A guilt-laden man approached Rabbi Shimon Efrati of Warsaw about something that happened when he and fellow Jews had hidden from the Nazis in an underground bunker. Trying to quiet a crying baby to avoid capture, the man accidentally smothered the infant. Efrati relieved him of formal repentance, “even though the legal analysis might lead you to a different conclusion,” Grodin says.

“They were psychologists as much as they were rabbis. They go through the analysis and then oftentimes counterintuitively come up with a different answer, to protect the psychology of the person.”

Oppression also forced the rabbis to grapple with more prosaic conundrums: Is it OK to steal wood to construct a sukkah, the hut built to observe the harvest festival of Sukkoth? (“The Nazis originally stole the wood from the Jews, so they said it was OK to steal the wood back,” Grodin says.) Is it permissible to eat and say a bracha, or blessing, over nonkosher food? (“The answer was the food was considered kosher, because there was no other food, and you would die otherwise.”) What about eating on Yom Kippur, the high holy day observed by fasting? (“You can eat because it saves a life. There’s a very famous story of a rabbi getting up in front of a congregation and eating on Yom Kippur.”)

Grodin, who is also a School of Medicine professor of psychiatry and family medicine, hopes to publish two books based on the responsa. Miller’s work in the research has run the gamut, she says: “project organization; researching the rabbis; researching locations where these rabbis lived; researching rabbinic responsa in general; categorizing materials; writing, updating, and researching the notes sections in the manuscript; formatting the manuscript.”

Because Grodin “includes his research assistants in every aspect of the work that he does,” Miller says, her UROP work has taught her more than Holocaust history. “He educates us about caring for survivors of torture and trauma, ethics in medicine, Jewish law, psychiatry, psychotherapy, and more.” (Grodin’s medical practice includes survivors of contemporary torture.)

“The question, of course, is where was man during the Holocaust, not where was God,” Grodin says. “There was nothing inevitable about the Holocaust. People made choices.”

“Spiritual Resistance” to the Holocaust