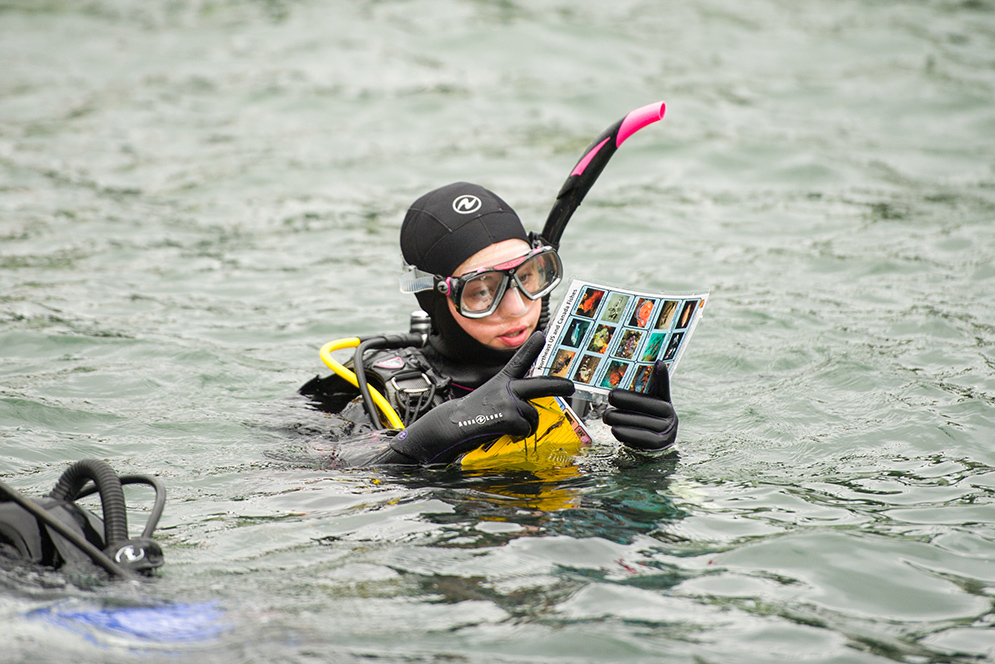 Jennifer Soukup (CAS’18) with the field guide card used to identify the denizens of Scituate Harbor during a Scientific Diving class. Photo by Cydney Scott

On a recent blustery, drizzly morning, Scituate Harbor is choppy and gray, mirroring the overcast sky, the water barely 60 degrees and murky. A lousy day to go scuba diving, you’d think. But when Jennifer Soukup pops to the surface and pulls off her mask, she’s grinning from ear to ear.

A juvenile spotfin butterflyfish to be precise, brightly trimmed in yellow, about as long as her index finger and far from its usual warm-water home. The fish are sometimes carried from the Caribbean to the New England coastline by the Gulf Stream current.

It’s a nice surprise for the six future marine scientists during the final dive of their Scientific Diving class, led by Phillip Lobel, a College of Arts & Sciences professor of biology. It’s the second time this month that Soukup’s dive buddy, Robin Francis (GRS’23), has seen a butterflyfish in the same corner of the harbor, and the sighting is rare enough that their professor thinks it’s probably the same fish.

The dive conditions are tough, but “it was sooo worth it,” Soukup says, still grinning while rinsing off later on the dock with a cold-water hose in the brisk wind. She even got a picture.

Scientific Diving is one of several monthlong courses offered each fall as part of the BU Marine Program (BUMP) marine semester. To take the course, students must already be certified scuba divers, although their experience may be mainly recreational.

“The course teaches the skills necessary to be a marine scientist and use scuba diving as a tool,” Lobel says, “as well as teaching the regulatory obligations for diving in the workplace.”

The veteran marine scientist learned to dive at age 12 from his father, who picked it up while serving in the army in the Pacific during World War II. Lobel’s research interests today are fish behavior and ecology, particularly the sounds fish make. He leads the class (capped at 10 students) with the help of teaching fellow Katey Lesneski (GRS’18), also a skilled diver and marine scientist.

“You have to plan everything as carefully as your research proposal,” says Lobel. “We have to have a dive plan that includes an emergency response component and that lays out logistically how we’re going to accomplish whatever research we want to do.”

In recent decades, the American Academy of Underwater Sciences and the federal Occupational Safety and Health Administration have codified diver conduct and safety procedures on top of scientific protocols. The four-year-old BUMP course is intended to help undergrads, graduate students, and even faculty members satisfy all those requirements, earning several certifications that will help them professionally as well as help them to stay safe underwater.

The class “definitely focuses my attention towards taking notes and critically analyzing my environment and the changes I see,” says Soukup, who hopes to study climate change and the way species adapt.

For some students, the BUMP semester concludes with a trip to Calabash Caye Field Station on Turneffe Atoll, Belize, where they put their underwater lessons to work in field research projects along one of the world’s largest barrier reefs. But in Lobel’s class, they practice diving at various sites along the New England coast, like the Scituate Harbor dock, which belongs to the National Oceanic and Atmospheric Administration’s Stellwagen Bank National Marine Sanctuary team.

Madison Montgomery (CAS’17) learned to dive when she was about 14, so she could take a couple of marine biology courses in high school. She has often dived in the Florida Keys and Mexico. But this class has posed new challenges.

“Going from diving in warm, clear water to diving in the cold, murky waters of New England is exciting, albeit unnerving,” Montgomery says. “Now, I find the conditions to be pretty phenomenal as far as helping us improve our skills. Murky water means you have to pay extra-special attention to where you are, where your buddy is, where you’re going, and your buoyancy, among other things.”

Earth and environment doctoral student Emma Reed (GRS’21) learned to dive in Hawaii as a Cornell undergrad. She has a climate-change research project under way in the Marshall Islands. The Pacific Island nation averages about seven feet above sea level, and is highly vulnerable to sea level rise. But there is little long-term instrumental data to study, so Reed uses what are called paleoclimate proxies to solve this problem: species of corals that grow annual layers, like tree rings, that she can analyze to reconstruct ocean temperatures hundreds or even thousands of years ago. Scientific Diving is part of her preparation to return next year and take samples of those corals.

There’s no coral in Scituate Harbor, but there are plenty of lobsters, sculpin, and a few small striped bass. The bottom, 15 or 20 feet down, is carpeted with scallops.

Lesneski surfaces, slides off her scuba tank, and climbs onto the dock clutching a plastic bag full of water and creatures called ctenophora. “They look like jellyfish, but they aren’t,” she says. “They all have parasites that my advisor studies.”

The ctenophora are clear, amorphous little blobs, the red, thread-like parasites clearly visible inside them. When a few spill back into the water, the students bobbing on the surface quickly find her a fresh supply, catching them in their hands and adding them to the bag.

Actual diving is only part of the course. On one morning, the class gathers in the basement of the Biology Research Building on Cummington Mall to practice working with the emergency oxygen kit and to talk about decompression and diving mishaps.

“You shouldn’t be in a rush to get out of the water,” Lobel cautions the students. “Stay hydrated and rested. Don’t be hungover. When you’re tired is when accidents happen.”

They watch a video detailing hazards marine life can pose to divers. Some fish might mistake a shiny piece of jewelry for a tasty little fish. Then there are all the jellyfish and anemones and other sea creatures that defend themselves by dishing out a mild sting or even a serious poison. (Vocabulary word for today: envenomation.) In most cases it’s not that the creatures are out to get you—rather, they tend to react defensively to accidental encounters. So don’t reach into holes in the rocks. If you find your hand in the jaws of a moray eel, Lobel says, resist the entirely understandable urge to jerk it back, because the eel won’t release until you stop struggling.

No morays in Scituate Harbor, but the wildlife are not entirely friendly. Mollie Yacano (CAS’17) and her dive buddy, Montgomery, go back underwater to look for a dropped mask. When Yacano reaches through the murk for what she thinks is the mask, what she gets is a nip from a crab. She shows off the small wound later on the dock.

“It was my mistake,” she says. “I couldn’t really see much; it was very black down there.”

“It was just a little love nibble,” says her dive buddy.

One Class, One Day: Scientific Diving

There is 1 comment on One Class, One Day: Scientific Diving